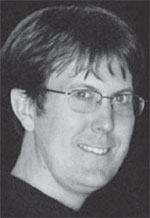 see also Silas Wollston (organ)
Silas Standage was a chorister at St Paul’s Cathedral and sang for the wedding of Charles and Diana as well as being part of a real boy band of trebles called ‘Too Short’. During his teens his flare for composing and arranging music flourished.

After an organ scholarship at Trinity College, Cambridge, he studied the harpsichord at the Guildhall School of Music and Drama, London and the Conservatoire Royal, Brussels. He now performs with many orchestras, most notably the English Baroque Soloists, with whom he performed and recorded most of Bach’s Cantatas during the year 2000. He is passionate about 17th-century music, in particular the violin band music of Matthew Locke.