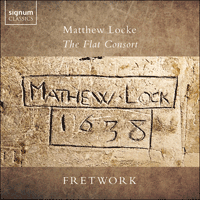 Composed the best part of four centuries ago, Matthew Locke's 'Flat Consort' finds him at his most virtuosic, and in many ways represents the apogee of a tradition begun some 150 years earlier: there is a quixotic, capricious restlessness to this music that is constantly challenging the listener, and makes for a thrilling musical ride. 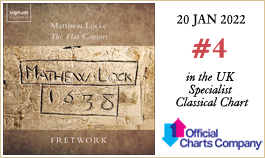 Matthew Locke was born 400 years ago in 1622, and while he is often ranked as one of England’s finest composers, he is still unaccountably neglected: his music may not be as immediately appealing as his immediate successor, Henry Purcell, nor as wide-ranging as William Byrd, yet his forceful musical personality and luxuriant technique place him in the first echelon of English composers. He was a difficult, cantankerous man, who took offence easily, bore grudges and spoke his mind without much regard for the consequences; yet his music is filled with a generous warmth that is hard to reconcile with this personality.

We may assume he was born in or near Exeter and became a choirboy there around 1630. He carved MATHEW LOCK/1638 on the wall behind the organ, and again ML/1641, probably when his left the choir.

He may have gone with Charles I to the Hague in 1648, where he may have converted to Catholicism. By 1651 he was back in Exeter and had written his ‘Little Consorts’, ‘made at the request of Mr Wm. Wake for his Schollars’. He wrote this into a scorebook he had started, in which he collected all his chamber music throughout his life. It is the principal source of most of this music, now held by the British Library. The first entry is of the Bass Duos.

Later in the 1650s, during the Commonwealth, Locke spent his time in Hereford. There he married Mary, daughter of Roger Garnons of Trelough (near Hereford), a Catholic recusant. Here he took part in music meetings organised by Silas Taylor, who also provided him with a house. Even though Taylor was a parliamentary sequestration commissioner, and presumably Protestant, the meetings themselves were suspected of being pretexts for assemblies of ‘Papists and Delinquents’.

And it’s not hard to see why the Catholic Locke would find life in Hereford congenial. It was known as an outpost of the old religion and there was even a Jesuit College located in the county, close to the Welsh border. The Flat Consort was titled ‘for my cousin Kemble’, and it seems that his wife was related in some way to the prominent Hereford Catholic family of that name. John Kemble became a martyr in 1679, but was an active priest, ordained in Douai in 1625 and sent as a missionary to Hereford and Monmouth.

The Flat Consorts themselves follow similar lines to most of Locke’s chamber music, with Fantazias followed by dances, woven together into a suite in the same key. However, this consort set has a varied instrumentation: the first two are for treble, tenor and bass viols, with any continuo instruments using the bass viol’s part. The other three have treble, and two bass viols which alternate playing the bass and the middle line. In these, the continuo has to have a part constructed that links the actual sounding bass part together from the two bass viols; and, even though Locke’s score doesn’t provide such a part, another source, from Oxford, does just that.

We can well imagine that these consorts were played in the music meetings in Hereford, and that they were composed with the participants in mind. Locke himself was a keyboard player, but probably also played the viol, so could have played either in these meetings.

It is interesting to see the relative ease with which Catholics such as Locke were able to thrive in the Commonwealth; the regime’s focus was more on the Royalist sympathisers who posed a greater threat. Also, we can perhaps contrast the seriousness of these intense works of consort music that Locke composed during this period with a lighter style of music that he developed after the restoration of the monarchy in 1660—Charles II famously couldn’t abide ‘Fancys’, and greatly preferred to tap his foot to the dance music to which he had grown accustomed in French exile.

Locke was to parade his Catholicism in public when, on 22 March 1654, he walked to the gallows with a condemned murderer whose final action was to proclaim the Catholic faith. He was even denounced by a fellow musician, Matthew Price, who had attended Silas Taylor’s music meetings. But he seems to have got off without much trouble and had made his way to London a couple of years later, when he composed the music for William Davenant’s The Siege of Rhodes of September 1656 and also sang the part of the Admiral. The same year The Little Consort was published by Playford.

He was to remain in London for the rest of his life, apart from a sojourn in Oxford to avoid the plague. By the time of the restoration, he was England’s pre-eminent composer, and eventually held three court positions. In addition, he was a prominent composer for the commercial theatre and wrote incidental music for 12 productions by William Davenant and his Duke of York’s company, anticipating Purcell’s semi-operas with Thomas Shadwell’s Psyche in 1675. He was writing music right up to his death in 1677, a year before his much older colleague, John Jenkins.

Locke’s chamber music can be seen in the context of the gradual change in English consort music over the 17th century, and the passing on of the flame of virtuoso viol playing from England to France. Whereas Lawes and Jenkins wrote consort music of five and six parts, Locke’s largest ensemble is of four; this, his Flat Consort and the Little Consort are of three; and the Consort of Several Friends is for just two. And at this time, English viol players were the preeminent virtuosos of Europe. Locke’s visit to the ‘Low Countreys’ may have introduced him to the French style, and we can hear this influence most clearly in the many Courantes that he wrote—all the chamber music suites contain one—and he was, famously, to remark that he ‘never yet saw any Foreign Instrumental Composition (a few French Corants excepted) worthy an English mans transcribing’.

This is found in the introduction to the print of the Little Consort, and later he pleads with the performers to ‘do your selves and me the right to play plain, not tearing them in pieces with division, (an old custome of our Country Fidlers, and now under the title of A la mode endeavoured to be introduced)’.

Yet, there is a big difference between division and ornamentation, or gracing, and for this we have turned to Locke’s friend and contemporary, the viol virtuoso Christopher Simpson, for examples of suitable ornamentation from this period. Locke wrote a dedicatory poem for the first edition of ‘The Division Violist’, published in 1659, in which he declares the viol to be ‘The Instrument our Nation Glories in’.

Simpson himself asked Charles Coleman to compile the table of graces, divided into the ‘Smooth Graces’ and the ‘Shaked Graces’. You will hear plenty of Beats, Backfalls and Double Relishes in our recording. What is striking about Simpson’s table is how similar the ornaments are to French viol graces that we find in the solo music of Marin Marais, Demachy and Ste Colombe, just a few decades later.

Locke’s consort music is the last great body of chamber music for viols and sits atop the great tradition that was begun nearly 150 years before. Yet the taste for the dense complexities of five- and six-part counterpoint had passed, and it is notable that Locke only wrote one set of consorts in four parts, described by Roger North as ‘a magnifick consort of 4 parts, after the old style, which was the last of the kind that hath bin made’, and produced most of his music in three parts or fewer. The Flat Consort contains his most virtuosic music, especially the three for treble and two bass viols, and yet he manages to combine this show-off element with refined and delicate counterpoint, every bit as involving and satisfying as Jenkins or Lawes. But those earlier masters preferred to produce fantazias that often inhabited a single affect or mood throughout, whereas Locke’s fantasias are notable for the many and quick changes in tempo and affect: Purcell’s three and four-part fantasias are clearly modelled on Locke’s in this respect. The result is a quixotic, capricious restlessness that is constantly challenging the listener to follow his argument; it is a thrilling musical ride, and I for one am amazed that these wonderful works have rarely been performed or recorded. I hope this recording can begin the rehabilitation of Mr. Matthew Locke’s magnifick consorts.