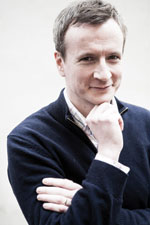 Winner of the 1999 Leeds Conductor’s Competition, Scottish-born Garry Walker studied at the Royal Northern College of Music. In 1999, at very short notice, he replaced an indisposed Daniele Gatti for the Royal Philharmonic Orchestra’s opening concert of their Barbican season. Thus began an ongoing relationship which led to his appointment as Permanent Guest Conductor. He has been Principal Guest Conductor of the Royal Scottish National Orchestra and Principal Conductor of the Paragon Ensemble, and he now enjoys a close association with Red Note Ensemble, Scotland’s premiere contemporary music ensemble.

In the United Kingdom Garry Walker has worked with all the BBC orchestras, the Hallé, National Youth Orchestra of Scotland, London Sinfonietta, Royal Liverpool Philharmonic Orchestra, Philharmonia, and the City of Birmingham Symphony Orchestra. Chamber orchestras he has conducted include the Northern Sinfonia, Scottish Chamber Orchestra, English Chamber Orchestra and Academy of St Martin in the Fields. He regularly appears at the Edinburgh Festival and in 2004 conducted a notable performance of Mahler’s Symphony No 2 ‘Resurrection’ with the BBC Scottish Symphony Orchestra.

Outside the UK Garry Walker has appeared with the Nieuw Ensemble, the Gothenburg Symphony Orchestra, the Orchestre Philharmonique du Luxembourg, Collegium Musicum Copenhagen, Musikkollegium Winterthur and the Deutsches Symphonie-Orchester Berlin. Further afield he has had re-invitations to both the Melbourne Symphony Orchestra and the Auckland Philharmonia and made his US debut with the Utah Symphony Orchestra.

An experienced opera conductor, Garry Walker conducted both Britten’s Curlew River and the world premiere of Stuart MacRae’s opera The Assassin Tree at the Edinburgh Festival. He also conducted the MacRae at the Royal Opera House’s Linbury Studio, Sir David McVicar’s much-acclaimed production of Benjamin Britten’s The Turn of the Screw and Raskatov’s A Dog’s Heart for English National Opera, Cimarosa’s The Secret Marriage for Scottish Opera, Mozart’s La clemenza di Tito at the Royal Northern College of Music and Poulenc’s La voix humaine at the Linbury Studio Theatre at the Royal Opera House, Covent Garden. Outside the UK he has conducted Curlew River for Lyon Opera and a new production by Calixto Bieito of Hosokawa’s Hanjo at the Ruhrtriennale.