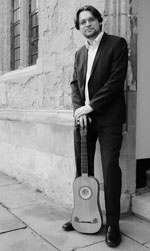 see also Žak Ozmo (director)
see also Žak Ozmo (lute)
Born in Bosnia and Herzegovina, Žak Ozmo is a music director, lutenist, and scholar in historical performance practice residing in Britain. After receiving a thorough musical education in his native country, he moved to Canada where his musical interest quickly turned to the lute family of instruments, performance practice, and related history and philosophy. Žak holds a doctorate in early music performance from the University of Southern California in Los Angeles, and has completed postdoctoral studies in the same area at the Guildhall School of Music and Drama in London.

In addition to growing up in an environment where the musical traditions of East and West have been intersecting for centuries, Žak was subsequently influenced by a number of extraordinary musical figures with whom he has had the privilege of studying and working. Hailed by Classical Music magazine as ‘an expert on early plucked instruments’, he has performed as a continuo player, chamber musician, and as a soloist across Europe, North America, and Asia on the archlute, theorbo, Renaissance lute, and Baroque guitar.

In addition to his busy performing schedule, Žak holds the post of Director of Early Music at the University of Hull. He has also been active as a lecturer in various aspects of historical performance practice, ensemble coach, and lute teacher at the Royal College of Music in London, University of Southern California in Los Angeles, and the University of California at Fullerton. He presents his research at musicological conferences in Europe and North America, while his writings have been translated into French, German, Spanish and Korean, and appear in some of the leading journals and magazines in the field.