The charismatic and sought-after Heath String Quartet won the 2016 Gramophone Chamber Award for their recording of the complete quartets of Sir Michael Tippett, and in 2013 became the first ensemble in 15 years to win the prestigious Royal Philharmonic Society’s Young Artists Award. Formed in Manchester in 2002 they were selected for representation by YCAT, awarded a Borletti-Buitoni Special Ensemble Scholarship and won the Ensemble Prize at the Festspiele Mecklenburg-Vorpommern where they are now regular visitors.

Following their award-winning debut recording of Tippett on the Wigmore Live label, the quartet recorded two discs for the Harmonia Mundi/PIAS label featuring Tchaikovsky’s first and third quartets (2016) and the complete Bartók quartets (2017), the latter being shortlisted for the 2018 Gramophone Chamber Award and the winner of the 2017 Limelight Chamber Recording of the Year award.

Notable concert performances have included the world premiere of John Tavener’s Requiem Fragments at the BBC Proms, performances with actors Olwen Fouéré, Jeremy Irons and Alex Jennings juxtaposing the Four Quartets of T S Eliot with Beethoven, and a single-evening performance of Jörg Widmann’s five-part 'super-quartet' in Berlin in 2018. In 2013 they appeared in ENO’s Fidelio production, playing Beethoven while suspended above the stage.

Strong exponents of contemporary music, the quartet have worked with leading composers including Hans Abrahamsen, Brett Dean, Helen Grime, Sofia Gubaidulina and Steve Mackey. The quartet has enjoyed a number of collaborations with the director Calixto Bieto and in 2018 embarked on a co-production between Birmingham REP and Holland Festival 'The String Quartet’s Guide', which toured throughout Europe. 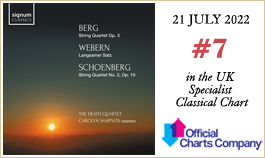