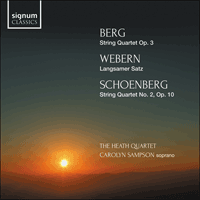 Together the three works on this album demonstrate the extraordinary advances made in the development of the musical language of Schoenberg and his two chief pupils, Berg and Webern, over a period of a mere five years at the start of the 20th century.

Anton Webern Langsamer Satz
The earliest of the three works, the Langsamer Satz, was written in June 1905 when Webern was both finishing his doctoral dissertation on Heinrich Isaac and completing his first year as a composition student of Schoenberg. The existence of the single-movement work only came to light in the early 1960s when a number of previously unknown manuscripts were discovered by Hans and Rosaleen Moldenhauer, the majority of them in the attic of a house in Perchtoldsdorf near Vienna. The musical language of the Langsamer Satz is the lush late-Romantic language of his teacher’s Verklärte Nacht (1898) and while, unlike the Schoenberg, the Webern piece has no programme, its subject is nonetheless love, since the 21-year-old Webern had spent the spring of that year hiking in Lower Austria with his cousin Wilhelmine and had fallen desperately in love with her. The work is, therefore, a love song to the woman he would later marry.

Arnold Schoenberg String Quartet No 2 Op. 10
Schoenberg’s second quartet of 1908, on the other hand, marks one of the two major turning points in both the musical language of Schoenberg himself and that of the whole Second Viennese School. The first quartet, Op 7, of 1904/5—a beautiful and unjustly neglected work—had already further extended the language of Verklärte Nacht. The third and fourth quartets would both be written using the twelve-note technique which Schoenberg gradually developed in the years leading up to the appearance of the Piano Suite, Op 25, in 1923. Quartet No 2 marks—and audibly demonstrates—the point at which Schonberg’s late Romantic language gave way to the free atonal ‘expressionist’ language that would characterise his music during the intervening years, the language of, amongst other works, Erwartung, the Five Orchestral Pieces, Op 16, and Pierrot Lunaire.

The progression from highly chromatic tonality to free atonality is unfolded within the work itself. Formally, Quartet No 2 is more traditional than No 1 which, like the first chamber symphony of 1906, had welded the usual four-movement symphonic structure into a single 45-minute work by spreading the different sections of the traditional sonata form first movement over the whole piece. Here in No 2 the first movement is a clear sonata form movement, the second movement a scherzo and the third movement, a setting of a poem by Stefan George, a set of variations on a seven-bar theme. The fourth movement—also a setting of a text by George but one that begins with the significant words ‘Ich fühle Luft vom anderem planeten’ ( ‘I feel the air from other planets’)—is Schoenberg’s first fully atonal movement. The work ends on a major triad of F sharp, the key of the first movement but, as Schoenberg himself says in his essay ‘My Evolution’ in Style and Idea, 'the overwhelming multitude of dissonance' could not be 'counterbalanced any longer by occasional returns to such tonal triads as represent keys'. The move to atonality was, therefore, both a compositional and a necessity since it was no longer adequate 'to force a movement into the procrustean bed of tonality without supporting it with harmonic progressions that pertain to it'.

One curious feature within the second quartet’s progression from extended chromaticism to atonality is the appearance in the centre of the second movement scherzo of the totally diatonic melody of the popular Viennese street song ‘Ach, du liber Augustin’. Various explanations have been given for the inclusion of this rather trite tune in the piece—from the purely musical (George Perle argues that its inclusion represents ‘a sardonic contrast to the tonal ambiguity of the rest of the work’) to the autobiographical in which the text (‘alles ist hin’—‘everything is lost’) as a reference to the impending collapse of Schoenberg’s marriage to Mathilde following her affair with the painter Richard Gerstl (although, in fact, the matter only came to a head some months after Schoenberg had decided to include the melody). In the essay ‘How one becomes lonely’ (Style and Idea) Schoenberg himself describes it as simply being included in 'a tragicomic' manner.

Alban Berg String Quartet Op 3
While Langsamer Satz was the first important outcome of Webern’s study as one of Schoenberg’s composition students, the Op 3 string quartet, following the Op 1 piano sonata and the four songs of Op 2, was the last of the ‘graduation’ pieces that Berg completed under Schoenberg’s tuition.

Berg wrote the first movement of the work in 1909, when it was ‘tried out’ by an ad hoc quartet; the second movement was completed in 1910. Schoenberg’s Quartet No 2 had received its first performance in December 1908 and from the outset Berg recognised the implications of what Schoenberg had achieved. He would go on to produce a work that was even more radical.

In 1936, soon after Berg’s death, Schoenberg wrote about Op 3 that 'obviously Alban, who had occupied himself extraordinarily intensively with contemporary music, with Mahler, Strauss, perhaps even Debussy, whose music I did not know, but certainly with my music—it is sure that Alban had a burning desire to express himself no longer in classical forms, harmonies, and melodic forms and their proper schemata of accompaniment, but in a manner in accordance with the times and wth his own personality which had been developing in the meantime … One thing is sure: his string quartet (opus 3) surprised me in the most unbelievable way by the fulness and unconstraint of its musical language, the strength and sureness of its presentation, its careful working and significant originality.'

Formally the first of the two movements of Op 3 bears some semblance to that of a traditional sonata form but without any suggestion of the functional harmonies or tonal centres that would usually support such a structure. The second movement has no such formal background and, while it has its own distictive material, is best understood as a development and reworking of material from the first movement—indeed the basis of the whole work is the Schoenbergian concept of ‘developing variation’ in which an idea is constantly modified and varied, giving rise, through compressing or extending, inverting or realigning the material, to new motives and new variants. Thus, for example, the fff theme on viola and cello at bar 5 of movement 2 is based on an inverted and rhythmically changed version of the lyrical theme on first violin at bar 6 of movement 1. The relationship between the two movements gradually become more clear as the second movement progresses until, towards the end, it quotes directly from the opening of the first movement.

Berg was a moderately good pianist when playing piano duets, describing himself as the 'last of the great four-hand players'. He was not a string player but one notable feature of the score of Op 3 is the detailed technical instructions as to exactly how it was to be played. Thus we have not only directions that a passage should be played on the bridge, as harmonics on the bridge, played on the finger board, struck or played with the wood of the bow, spring Bogen, with a dense or light tremolo and so on, but also stipulations about which of the strings a figure should be played on. The whole work thus also acts as a demonstration of the colouristic possibilities of the medium. Op 3 received its premiere in Vienna in April 1911 but it was not until its performance by the Havemann Quartet at the ISCM Festival in Salzburg in 1923, almost a year after the publication of the piano score of Wozzeck, that it received a warm reception; 18 months earlier, by April 1922, the work, which had been had been published at the end of 1920, had sold only 10 copies of the score and 10 sets of parts. The premiere of Wozzeck in Berlin in December 1925, just over two years after the Salzburg performance of Op 3, would of course establish Berg as a major figure.