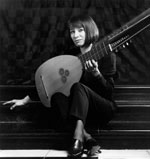 see also Paula Chateauneuf (chitarrone)
see also Paula Chateauneuf (theorbo)
Soloist, accompanist, teacher and linchpin of numerous ensembles, lutenist Paula Chateauneuf has earned her reputation as one of the most respected and admired musicians in the early music world; her playing has been described as ‘one of the most exciting things on the pre-classical concert circuit.’ Arriving in London as an American Fulbright Scholar she quickly established herself as a versatile member of the London scene, during which time she was involved in pioneering work with the groups Circa 1500 and Sinfonye, where her improvisational skills came to the fore. It was also then that long-lasting musical relationships were established with the New London Consort, and the Gabrieli Consort, whose principal lutenist she remains to this day.

Paula’s in-depth knowledge and skill in the art of basso continuo has made her one of the most sought-after accompanists in early music, resulting in fruitful collaborations with many leading soloists. Her wealth of experience in early opera has led to involvement as both repetiteur and continuo player with the Bayerische Staatsoper, Maggio Musicale Fiorentino, New Israeli Opera, Royal Opera House, Glyndebourne, and Liceu Barcelona.

Paula has recorded extensively for Decca, EMI, Deutsche Grammophon, Linn, and Hyperion. She is a regular coach on courses for the Britten-Pears Young Artist Programme, Royal Academy of Music, and De Nieuwe Opera Academie (Amsterdam); she is the lute tutor for the University of Birmingham’s early music department and was an AHRC Creative Arts Fellow. 2009 saw the establishment of her 17th-century style improvisation ensemble, The Division Lobby.