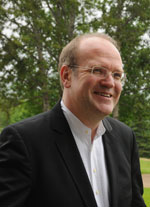 A specialist in Baroque and Classical repertoire, Bernard Labadie is Music Director of Les Violons du Roy and La Chapelle de Québec, founded by him in 1984 and 1985 respectively, with whom he regularly tours Canada, the United States and Europe. They are frequent guests at major venues and festivals and recent appearances have included the Salzburg Festival, New York’s Carnegie Hall and Lincoln Center, the Walt Disney Concert Hall in Los Angeles, the Kennedy Center in Washington, London’s Barbican Centre and the Concertgebouw in Amsterdam.

Labadie is a regular guest with all the major North American orchestras. He appears frequently with the New York and Los Angeles Philharmonic orchestras, the Philadelphia Orchestra, the symphony orchestras of Chicago, Boston, San Francisco, St Louis, Houston, Atlanta, Detroit, Montréal, Toronto and Vancouver, the New World Symphony in Miami, the St Paul Chamber Orchestra and the Los Angeles Chamber Orchestra. In 2010 he made his debut with the Cleveland Orchestra. He is also enjoying increasing renown in Europe and has recently had successful debuts with among others the Bayerischer Rundfunk Orchestra in Munich and the Orchestre Philharmonique de Radio France in Paris. He also works with the NDR Orchestra Hannover, Academy of Ancient Music, the English Concert and the Northern Sinfonia where he is a regular guest.

A highly experienced opera conductor, Bernard Labadie was Artistic and Music Director of L’Opéra de Québec (1994–2003) and L’Opéra de Montréal (2002–2006). Guest engagements have included Così fan tutte at the Mostly Mozart Festival in New York, Orlando for Glimmerglass Opera, Lucio Silla for the Santa Fe Opera, Die Entführung on tour with the OAE and Die Zauberflöte for the Metropolitan Opera, New York and for Cincinnati Opera. His honours include Officer of the Order of Canada awarded by the Canadian Government and Chevalier de l’Ordre National du Québec.