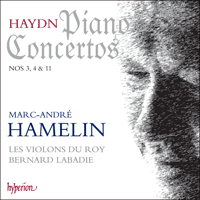 Marc-André Hamelin has proved himself—in three lauded volumes of Haydn’s piano sonatas—to be a formidable Haydn pianist, combining style, exuberance and dazzling technique with a palpable sense of joy in the music. Now he has recorded the composer’s three most popular concertos.

This release is the fruit of a partnership with the award-winning Canadian chamber orchestra Les Violons du Roy and their director Bernard Labadie, whose previous recordings for Virgin Classics and other labels have received the highest critical acclaim.

GRAMOPHONE RECORDING OF THE MONTH

‘Hamelin challenges the benchmark recordings for supremacy … the cadenzas are among the special joys of this new recording … almost worth the price of the disc’ (Gramophone)
‘Pianist Marc-André Hamelin and Les Violons du Roy play the gypsy rondo of the D major Concerto with irresistible verve … the finale of the G major Concerto is a dazzling piece too … Hamelin's showmanship and the eloquence of his slow movements is an added bonus’ (BBC Music Magazine)
‘I am bowled over … it is as though we are getting the best possible compromise between the shimmering timbre of the harpsichord and the rather grander majestic sweep of the modern piano, all bound together eruditely by Hamelin … the players of Les Violons du Roy show supreme tightness and fizz in their dispatch of the rapid-bowed figures and yet are as soft as a feather duster when placing chords in the slower movements … Olympian power, authority, consistency and finesse’ (International Record Review)
‘Hamelin's songful legato in the F major's largo cantabile and bravura in the presto finales make the strongest possible cases for these works, and I don't know a more exhilarating account of the D major’ (The Sunday Times)
‘Hamelin's masterly control to every little note shows itself to full advantage. This disc offers serious competition … Les Violons du Roy are as lively and as rhythmically solid as Hamelin’ (Pianist)

Such was Haydn’s international prestige by the late 1770s that his name on a manuscript guaranteed increased sales. In an age before strict copyright laws, unscrupulous publishers—and the epithet often went with the job—issued reams of ‘Haydn’ symphonies, concertos and keyboard works that subsequently turned out not to be by him at all. This European-wide Haydn mania could even work against the composer. When his keyboard concertos in G major and D major were published by the Amsterdam firm of Joseph Schmitt in 1784, the reviewer of Cramer’s Magazin der Musik refused to commit himself: ‘One is now rather sceptical if everything published in his name is really Haydn’s. In these two concertos some traces of Haydn shine through. But we do not venture to assert that they are entirely his work. Yet we do not wish in suggesting this to imply that these concertos are poor; they are very well composed, appear to be brand new, but seem to have been composed for particular connoisseurs.’

Although we might discern more than ‘some traces of Haydn’ in these works, the D major especially, the anonymous reviewer had a point when concertos ostensibly by him were already being revealed as spurious. Doubt lingers even today. In his catalogue of Haydn’s works published in 1957, Anthony van Hoboken listed some ten works for keyboard and orchestra whose authorship has long been contested, plus numerous concertos for other instruments. Apart from a clutch of frothy organ concertos from the 1750s, the only indubitably genuine Haydn works for keyboard and orchestra are those recorded here: the F major and G major concertos, scored for strings alone, and the familiar D major, where the string band is enriched by oboes and horns.

Stripped of dubious and spurious works, Haydn is left with nearly forty concertos, many of them lost, for instruments ranging from the flute and oboe to the baryton (an unlikely obsession of his patron, Prince Nicolaus Esterházy), bassoon and violone. An impressive tally, you might think. Yet the concerto never played a central role in Haydn’s creative life, as it did in Mozart’s. One obvious reason is that, although more than competent on the keyboard and the violin, he was on his own admission ‘not a wizard on any instrument’, and except for the early organ concertos wrote no concertos specifically for his own performance. Another is that from around 1750, the symphony gradually usurped the concerto in popularity and prestige in the Austro-Hungarian lands, a situation briefly, and locally, challenged with the great series of piano concertos Mozart composed in his Viennese heyday in the mid-1780s. In any case, Haydn’s characteristic strengths—concision, tight thematic unity, intensive dialectical argument—found only limited scope in the concerto genre, at least until the D major Keyboard Concerto and the late Trumpet Concerto.

Although they sound well on the modern piano, the concertos in F and G were composed for harpsichord, like all of Mozart’s concertos up to and including the so-called ‘Jeunehomme’, K271. Compared with the fiery symphonies that Haydn was producing in the late 1760s and early 1770s, both concertos sound slightly old-fashioned, with keyboard writing modelled on the graceful, limpid style of Galuppi and the Viennese master of galanterie, Georg Christoph Wagenseil. But they are works of charm and spirit, with specially touching slow movements. Probably composed around 1765–7, the Concerto in F major, Hob XVIII:3, appeared in the catalogue of the publisher Breitkopf (not yet united with Härtel) in 1771, though Haydn does not seem to have been consulted, and earned nothing from the edition. Sixteen years later, the Paris firm of Le Duc issued the work, this time with the composer’s authority, as ‘Concerto Pour le Clavecin [Harpsichord] ou Piano-Forte, avec Accompagnement de deux Violons, Alto et Basse’. By 1787 the ‘piano-forte’—i.e. fortepiano—was usurping the harpsichord in salons and concert halls, and publishers of keyboard music were careful to keep the options open.

If the F major Concerto’s spry opening Allegro contains relatively few Haydnesque surprises, it carries the listener along with its energy and confident sense of direction. There are some piquant contrasts of major and minor (a ploy Haydn may have picked up from Wagenseil’s sonatas and concertos), and a long, modulating central development where the ubiquitous moto perpetuo keyboard figuration builds to an impassioned climax. The C major Largo cantabile is a wordless operatic aria designed to display the player’s ‘taste’ (an eighteenth-century buzzword) and feeling, the finale a fetching contredanse with scintillating toccata-style keyboard figuration.

While there is no firm evidence, the Concerto in G major, Hob XVIII:4, probably (that word again) dates from a few years later than the F major. What we do know is that it was played at the Concert spirituel in Paris by the famous blind Viennese pianist Maria Theresia von Paradis (1759–1824) in the spring of 1784, and published shortly afterwards (with inauthentic added parts for oboes and horns) by the firm of Boyer. Later the same year Mozart would compose his Piano Concerto in B flat major, K456, for Paradis.

With its lean scoring for strings alone, Haydn’s concerto has none of Mozart’s melodic and colouristic richness. Paradis may even have found it slightly old-fashioned by the standards of 1784. Yet on its own terms it is a delightful, inventive work, more memorable in its ideas and more adventurous in its keyboard writing than the F major. The powerful modulating sequences at the centre of the opening Allegro recall the sonatas and fantasias of C P E Bach, which Haydn studied avidly after they circulated in Vienna in the mid-1760s. Strings are muted for the florid, rhapsodic C major Adagio, capped by a touching little orchestral coda. But the most arresting movement is the rondo finale, full of Haydnesque zest and wit (the refrain keeps popping up in unscripted keys), and one of his earliest flirtations with the Hungarian gypsy style.

Easily the most popular of Haydn’s keyboard concertos, in his lifetime and ever since, is the Concerto in D major, Hob XVIII:11, written ‘for the harpsichord or fortepiano’ sometime between 1779 and 1783, and thus more or less contemporary with symphonies Nos 73–78 and the Op 33 string quartets. By now Haydn was a European celebrity, fêted from St Petersburg to Cadiz, with publishers falling over each other to issue his latest instrumental works. He optimistically offered the concerto as ‘new’ to the London publisher William Forster in 1787 without mentioning that it had already appeared in several editions both on the Continent and in England. Aware of the competition, Forster turned the concerto down. While its exact date is unknown, a contemporary memoir suggests that it might have been played at a private Viennese concert on 20 February 1780 by Fräulein Anna von Hartenstein, a pupil of the celebrated Bohemian composer Leopold Kozeluch.

The D major Concerto is both more melodically attractive and more tautly organized than the two earlier works. Like Mozart in his Viennese concertos, Haydn here infuses the concerto’s traditional ritornello design, based on the alternation of solo and tutti, with the drama and dynamism of sonata form. Except in the finale, Haydn does not work with Mozart’s profusion of themes. His scale, as usual, is more compact. But the opening Vivace has plenty of melodic contrast to offset the crisp, clear-cut main theme which galvanizes the whole movement. The ‘tapping’ figure of three crotchets in bar two proves especially fertile, above all in the rapidly modulating development, where it is bandied about between various string groups against the soloist’s broken semiquaver figuration.

While the first movement works equally well on harpsichord or piano, the musing, ornate Un poco adagio, in A major, cries out for the dynamic shadings possible only on a touch-sensitive instrument. In this delicately orchestrated movement (sustained oboes and horns add a soft gloss to the opening tutti), Haydn creates poetry from the simplest material. The central episode, slipping immediately from E major to E minor, expands a repeated triplet figure first heard near the beginning into an exquisite dialogue between keyboard and strings.

It was surely the finale that sealed the concerto’s popularity in Haydn’s lifetime, as the composer doubtless calculated it would. Haydn had already hinted at the Tokay-flavoured Hungarian gypsy style in the G major Keyboard Concerto, and mined it more extensively in pieces like the finale of Symphony No 47 in G major and the minuet and finale of the D major String Quartet Op 20 No 4. But this Rondo all’ungarese outdoes all comers in its mingled flamboyant exoticism and zany humour. The main tune, which initially sounds like a ‘normal’ Haydn finale theme, has been identified as a dance from Bosnia or Croatia. From the moment the tune is repeated in the ‘wrong’ key of E minor, with stinging grace notes, the music grows progressively more delirious. The first episode whirls fragments of the main theme through a frenetic sequence of modulations, audacious even by Haydn’s standards. A contrasting theme sounds like a paprika-infused ‘Three Blind Mice’, made faintly ominous with trills, while a later episode seems to transplant an impassioned operatic aria to the wildness of the Hungarian puszta.