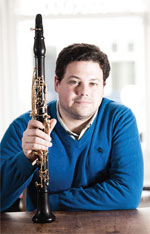 Peter studied at the Birmingham Conservatoire with Colin Parr, Mark O’Brien and Michael Harris. During his time at the Conservatoire Peter was the recipient of the John Ireland Prize for chamber music as well as being supported by philanthropist Chris Swan via the Young Cygnets. Peter was also lucky enough to be awarded a place on the City of Birmingham Symphony Orchestra Training Scheme.

Moving to London, Peter continued his studies at the Royal College of Music studying with amongst others Janet Hilton, Richard Hosford and Robert Hill. Peter also participated in masterclasses with Michael Collins and Anthony Pay. Whilst at the RCM Peter was award the Prix de Fossart and was invited to France to give a private recital which included Her Majesty the Queen of Denmark amongst the audience.

Upon graduating Peter was awarded a place on the Jerwood Foundation Scholarship for Young Players in association with the Orchestra in the Age of Enlightenment, and around the same time took part in the BBC docudrama ‘Eroica’. These early experiences shaped a freelancing career which has seen him work with various orchestras including the CBSO, BBCCO, ENB Philharmonic, Royal Ballet Sinfonia and Orchestra of the Swan as well as various session recordings. For a time, Peter held the principal seat with the Symphony Orchestra of India and performed under Charles Dutoit and Rafael Payare amongst others.

As a chamber musician and soloist Peter has been lucky enough to work with Martin Cousins, John Lenehan, Mark Bebbington, Julian Lloyd Webber and the Tippett Quartet, performing for various music clubs and festivals around the UK including the Windsor and Wooburn Festival, English Music Festival, Carlisle International Music Festival, Groba Festival in Spain and the ICA ‘ClarinetFest’. Peter has performed concertos in various parts of the UK and Europe as well as Mexico where he gave the first performance of Malcom Arnold’s Second Concerto. Peter’s interest in English repertoire has seen him premier concertos and chamber music by Gipps, Benjamin, Wishart, Spain-Dunk as well as contemporaries such as Lloyd Moore and Peter Seabourne.

Peter is an artist for Backun Musical, Silverstein Works and Marca. 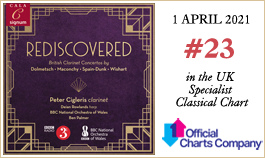