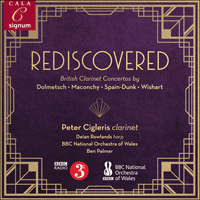 In the late summer of 2014, the search for Charles Villiers Stanford’s Clarinet Concerto manuscript was to take me on a journey that would shed light on some rather forgotten voices from the first part of the twentieth century in Great Britain.

The Stanford manuscript was located at the Royal Academy of Music, but a chance discovery was made of a previously unknown concerto by Victorian composer Ebenezer Prout. Having been able to acquire a copy of the score this got me thinking; what else was out there for the clarinet? It turns out the answer to that question is quite a lot. Unknown works that are now starting to come to light range from chamber works consisting of duos through to quintets as well as major concertante works with orchestra. The volume of music was eye opening, but even more striking was the perceived balance between the sexes showing that Britain between the Great War and the Second World War was beginning to widen its musical outlook.

The Second World War had a significant impact on compositional styles in Great Britain. Pre 1939/40 the two predominant styles within British music were those of Post-Romanticism and Nationalism: It can be argued that the post-romantics came from the Royal Academy of Music, led by the ‘Wagnerian’ Fredrick Corder, while the Nationalists came out of the Royal College of Music under the influence of Parry and Stanford. Post 1945, with the influence of the BBC, Modernism became the dominant style.

Four works particularly stood out to me on this journey and they just so happened to bookend the Second World War. These works became the focus of the current disc with the BBC National Orchestra of Wales. Susan Spain-Dunk and Rudolph Dolmetsch composed their concerti in the 1930s. Elizabeth Maconchy and Peter Wishart composed theirs in the 1940s. It also so happens that two prominent British clarinettists tie these four works together: Fredrick Thurston and Reginald Kell.

Susan Spain-Dunk Cantilena for clarinet and orchestra 'Poem' Op 51
The first performance took place on 12 July, 1930, at a private concert in Folkestone which included the Phantasy Quartet by Imogen Holst. The soloist for this premier performance with piano was Reginald Kell. No mention is made of the pianist, though it can be safe to assume that it was the composer. A review from 26 July remarks that 'Susan Spain-Dunk’s work was far ahead of all the others, both musically and technically'.

It was not until later in December of 1931 that Cantilena (later called Poem) was to be heard as Susan had intended. The concert took place on the 5th of that month at the Queen’s Hall in London and was conducted by John Barbirolli. The concert was organised by Trinity College of Music—then situated on Marylebone High Street—and performed by its students, and the soloist was no exception; the clarinettist in question was a Herbert New, studying with Charles Draper. According to N Porteous of the Folkestone Herald: 'Miss Spain-Dunk’s concerto for clarinet and orchestra was warmly received by a large audience.'

Earlier in 1931 Susan was fortunate to be invited by the BBC Selection Committee to submit Poem for consideration. We know that Poem was broadcast from London in early April of 1932 with Fredrick Thurston as soloist. The work received many ‘repeats’ with the final broadcast in 1957 being heard by Susan’s son, Revd Alan Henry Gibson, while posted in Malaya.

Poem is a charming single movement work in a modified sonata form. Beginning with a solo harp introduction the orchestra state a rather impassioned germinal motive with chromaticism reminiscent of Delius. The solo clarinet enters with a searching ‘quasicadenza’ and leads the orchestra to the main theme in D minor. After a little musical tussle between orchestra and soloist both land in the tonic major for a second theme which moves through to a quicker section with material from the opening. Some virtuosic moments from the soloist bring us back to a recapitulation with the opening solo ‘quasicadenza’ extended. The work concludes with a coda that feels as though the sun has finally come through the dark clouds of D minor ultimately landing in the relative major of F.

Elizabeth Maconchy Concertino No 1
Elizabeth was born in Hertfordshire to Irish parents. This connection to Ireland had a huge influence on the composer who did consider herself Irish. At the age of ten Elizabeth and her parents moved over to Ireland and this was where the composer had her first musical studies in Dublin. A place at the Royal College of Music brought Elizabeth back to England where she began her studies with Ralph Vaughan Williams. It may well have been around this time that Elizabeth met Frederick Thurston.

It was not until 1945 that a musical partnership developed between Thurston and Maconchy. This culminated in the first Concertino for clarinet and strings. The work received its premier in June 1947 with a broadcast on the BBC Third Programme in November. The conductor on both occasions was Anthony Bernard. Thurston gave the London premier in 1948 with the Jacques Orchestra. Sadly, after these performances the work remained unpublished and unheard until Thea King’s recording with the English Chamber Orchestra. The work is sonorous and impassioned fronting a somewhat tragic tone throughout, that is until the final section of the last movement where D flat major ‘wins’ over D flat minor. The Concertino is divided into three formal movements though it is conceivable that the intent was for a more continuous work with three contrasting sections.

Rudolph Dolmetsch Concerto for clarinet, harp and orchestra
Rudolph was the eldest son of Arnold Dolmetsch, and when able was drafted into the fold as a member of the family ensemble on harpsichord. He went on to establish himself as the foremost harpsichordist of his time. We are lucky that he left various recordings performing solo and alongside his wife Millicent who was a viola da gamba player. Into the 1930s Rudolph began to break away from the family institution of making music together with period instruments and to focus more on his own career. He was recognised as the leading harpsichordist of his generation but felt the need to establish himself as a composer and conductor, so much so that he went to study conducting at the Royal College of Music under Constant Lambert. Upon leaving the RCM Rudolph began his own orchestra and proceeded to give concerts, the first of which was in 1940. This concert received positive reviews and included works by contemporaries such as Sibelius, Kodály and the recently deceased Delius.

The Concerto for clarinet, harp and orchestra was completed on 24 November, 1939. The work is unique in that it is the only one of its kind for this combination of instruments by an English composer. Earlier in the month Rudolph had made his conducting debut with the London Symphony Orchestra which was widely acclaimed. It is conceivable that he might have had hopes that the principal players might take an interest in this concerto. The principal clarinet of the LSO at the time was Reginald Kell. However, it is more likely that he was intending it for his own orchestra. The work is dedicated to Millicent and is scored for chamber orchestra.

At the outbreak of war in 1939 Rudolph signed up to the Haslemere Home Guard while continuing to perform and conduct. His last concerts were in 1942 before being ‘posted’; Rudolph was to be posted overseas as a bandmaster, but sadly his ship SS Ceramic was torpedoed with only one survivor. A promising talent cut short.

The work is in three movements and treats the orchestra and soloists like a Neo-Baroque concerto of concertante and ripieno with a central cadenza for the two soloists in each movement. The first and third movements suggest ritornello forms while the soloists answer the orchestral arguments in virtuosic style pushing both solo instruments in range and technique. The second movement is an ostinato first stated in the cellos and basses and then reinforced by the bass clarinet. The soloists decorate the ostinato moving throughout the orchestra which builds to the central cadenza. The orchestra restate the ostinato and the soloists take on the responsibility to complete the movement.

The Serenata concertante has a difficult past because hardly anything is known about the work and its origins. We know that the work was composed in 1947 not too long after his studies with Nadia Boulanger. We also know the work is dedicated to Anthony Lewis. From 1935 Anthony Lewis was on the staff at the BBC and after the War in 1946 was given control of broadcast music. The role entailed sourcing artists that would broadcast on the BBC Third Programme which developed into planning the weekly symphony concerts. In 1947 Lewis joined the staff at Birmingham University while still maintaining a role at the BBC. We can assume that Anthony encouraged the young Peter Wishart and this work was probably intended for Thurston and the Third Programme.

The work then surfaced in early 1991 when the manuscript was found in papers belonging to the now deceased composer by Don Roberts; Don had worked with Peter as a librettist on his operas. It was suggested that the composer probably forgot about the work at some point, especially as no parts or a copy of the score were ever found. The World premiere took place at the ICA ClarinetFest, Oostende, Belgium 2018.

The work is in six movements and combines early British modernism with more conventional harmony. The opening introduction leads to three cadenzas over an augmented fourth interval in the basses and timpani. The third cadenza leads to a rather simple but jolly tune. This segues into a March which has a dark undertone perhaps reflecting the War. The third movement foreshadows the composer’s success in choral music using the melody ‘Josef Lieber, Josef Mein’ in a rather typical English pastoral setting. The Waltz feels like a representation of an organ grinder and uses polytonality; the orchestra set the tone of C major while the soloist and the woodwind insist on the key of E major until C major finally dominates. The Habanera transports us to Spain, perhaps a lazy day on the beach enjoying the sun with the movement closing in a similar way to turning out the lights on a rather enjoyable day. The Finale begins as the whole work opened and the soloist introduces a rather angular and articulated melody. The middle section swings a little more before an orchestral tutti takes us back to the angular melody. The coda takes the listener to a rather dramatic finish and the orchestra closes the proceedings.