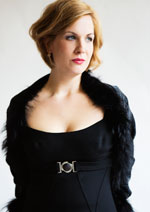 German soprano Julia Kleiter started her career performing in the role of Pamina in Mozart’s Die Zauberflöte—a role which she performed for almost ten years in Paris, Zurich, New York and Munich, and at the festivals of Edinburgh and Salzburg, with many conductors including Jirí Kout, Claudio Abbado, Nikolaus Harnoncourt, Marc Minkowski, Ádám Fischer and Philippe Jordan.

Since the outset of her career Julia has also maintained a busy schedule of concert performances and song recitals in major concert halls and festivals across Europe, Japan and the United States. Numerous DVD and CD recordings demonstrate her artistic variety.

Born in Limburg an der Lahn in Germany, Julia Kleiter studied with William Workman in Hamburg, and with Klesie Kelly-Moog in Cologne.