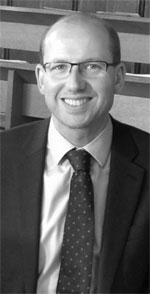 see also Charles Harrison (organ)
Charles Harrison was a chorister at Southwell Minster, and Organ Scholar at Jesus College Cambridge, where he took a degree in music and studied organ with David Sanger. A prize winner in the international organ competitions at St Albans (1999) and Odense (2000), Charles has given solo concerts around Europe, and in many of the celebrated venues in Britain. His concerto work has included performances with the Ulster Orchestra and the Irish Chamber Orchestra, both of which were broadcast by BBC Radio 3.

As Organist and Master of the Choristers at Chichester (since 2014) Charles trains and directs the Cathedral Choir, the core of whose musical ministry consists of 8 sung services each week. Each year, the choir broadcasts on national and local radio; regular tours serve to strengthen ecumenical and civic links, and maintain the choir’s reputation at international level. The choir enjoys a long-standing partnership with Chichester’s renowned Festival Theatre, performing at a series of concerts each December attended by a combined audience of several thousand.