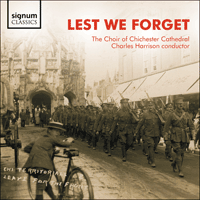 Exploring the themes associated with human conflict—and the powerful musical responses these have so often elicited—this recording has been made in support of Combat Stress, a charity on whose support traumatized service personnel have been able to draw for 100 years.

The work of musicians and writers forms some of the most eloquent responses to the grave crisis and unutterable horror of the First World War. As humanity confronted its potential for destruction on a grotesque and unprecedented scale, new depths of musical and artistic expression emerged. Existing texts and music took on fresh poignancy, as if fulfilling their true prophetic value. Composers in England produced works whose plangency and resonance have not diminished in the century since they were written.

A pre-eminent figure in British music in the late nineteenth and early twentieth century, Sir Charles Villiers Stanford (1852-1924) had studied in Leipzig in the 1870s. He was horrified by the war, and by what he considered to be Germany’s betrayal of its cultural heritage. The opening of For lo, I raise up is as direct and dramatic as that of any English anthem. It depicts the unassailable advance of a merciless army sweeping through the land. A quiet, prayerful interlude leads to a vision of a glorious future and a still, calm conclusion. Dedicated to the celebrated French musician Charles-Marie Widor ‘and the great Country to which he belongs’, Stanford’s Sonata 'Eroica' was composed in 1917 as a response to wartime events. The third movement, ‘Verdun’, commemorates the battle that, at 303 days, is the longest in recorded human history; recent estimates put the casualties at 976,000. The melody of the Marseillaise is woven closely into the fabric of this improvisatory fantasia.

Stanford’s influence is also represented here in the work of some of his students. Edgar Bainton (1880-1956), who studied under Stanford at the Royal College of Music, had the misfortune to be on holiday in Germany at the outbreak of the war, and spent the duration of the conflict interned in a prison camp. He is now principally remembered for his anthem And I saw a new heaven, in which modal harmonic language and unexpected juxtapositions of major and minor conjure a celestial kingdom beyond the reach of suffering and sorrow. Another of Stanford’s students, Gustav Holst (1874-1934) was deemed unfit for military service when he attempted to enlist in 1914. He was eventually taken on by the YMCA’s education department, working with British troops awaiting demobilisation in Salonica. Turn back, O man, an arrangement of a melody taken from the Genevan psalter, was composed in 1916. Its walking bass line drives the music inexorably away from the ‘foolish ways’ mentioned at the outset of the piece optimistically towards a future where ‘Earth shall be fair, and all her folk be one’. An admirer of music of the Tudor period, Holst requested that his ashes be interred in Chichester Cathedral, close to the memorial of his favourite Elizabethan composer, Thomas Weelkes.

Holst’s best-known melody, from ‘Jupiter’ in the Planets suite, has gained enhanced currency by its adaptation as a tune for the poem I vow to thee, my country, by Cecil Spring Rice. The patriotism expressed in verse one, modulated by an allegiance to the heavenly kingdom encouraged in verse two, has made this hymn a favourite at remembrance services. In The day thou gavest, the hymn writer John Ellerton contrasts the transience of ‘earth’s proud empires’ with a better kingdom that ‘stands, and grows for ever’.

Herbert Howells (1892-1983) succeeded Holst as Director of Music at St Paul’s Girls’ School in 1936, having studied with Stanford at the Royal College of Music. His third Rhapsody was written in a single sitting during a night-time Zeppelin raid on York in 1918. The drama and violence of this event are manifest in highly chromatic harmony and vivid rhythmic figures.

In a restrained and poignant musical setting, Sir Edward Elgar (1857-1934) gives telling expression to Laurence Binyon’s We will remember them, a short section excerpted from the final movement of The Spirit of England. Music and text are bound intimately together, particularly in the gently falling final phrase ‘At the going down of the sun’.

A prolific composer and writer, Sir Charles Hubert Hastings Parry (1848-1918) shares Stanford’s influential position in the late-nineteenth-century renaissance of British music. 'There is an old belief' is one of the six Songs of Farewell, a set of introspective pieces written towards the end of Parry’s life. The text by J G Lockhart expresses the desire for a place ‘beyond the sphere of Time and Sin’ where ‘dear friends shall meet once more’. In the final section of the piece, Parry borrows a plainsong incipit used to introduce the Credo (‘I believe in one God’), subtly consolidating the themes of faith and hope. Alfred, Lord Tennyson’s poem Crossing the bar is rich in extended metaphor: the threshold separating life and death is likened to a sandbar which a ship crosses as it moves from the safety of the harbour to the oceanic expanse on the other side. The figure of Christ is compared to the ‘Pilot’ who directs the journey.

A student of Parry, John Ireland (1879-1962) loved the English choral tradition, and made a significant contribution to its repertoire. Composed in 1912 for Charles Macpherson (Sub Organist of St Paul’s Cathedral), his anthem Greater love hath no man rapidly gained popularity, and was often used at memorial services for those lost in the fighting of the First World War. Bold and broad gestures at the opening of the Te Deum in F yield to more lyrical musical material in later sections.

The music of Peter Aston (1938-2013) is the most recent represented on this recording, yet his anthem So they gave their bodies fits comfortably into the musical and emotional landscape established by the other pieces. The text is part of a funeral oration by Pericles, a prominent Athenian politician, delivered near the start of the Peloponnesian War (431-404 BC). As well as praising the dead for their valour, Pericles reflects on themes of freedom, liberality and equal justice under the law. Aston uses descending arpeggio motifs in a haunting musical reference to the Last Post, the bugle call used at Commonwealth military funerals and commemorations of those who have fallen in war.

In the centenary year of the Armistice of 1918, our thoughts turn to the great human cost of the First World War and many subsequent armed conflicts. Combat Stress, founded shortly after the end of the war, was an early pioneer in responding to the profound mental scars sustained by service personnel. As awareness of mental illness grows, and as the extent of the need for treatment becomes ever more apparent, the charity continues to provide invaluable support to those who suffer as a result of traumatic events experienced during their time with the armed services.

Released in support of Combat Stress, this commemorative recording explores the themes associated with human conflict. The programme brings together texts and music pointing to the frailty that leads to the violence of war, but also to triumphs of the human spirit that so often arise from situations of the deepest desolation. Among those triumphs is the compassion of those who strive to assist the wounded in body or mind, as is the achievement of composers and artists, the beauty of whose work can offer healing and hope for a more peaceful future.