2017 marked twenty years since the foundation of El León de Oro, a vocal ensemble that began life in Asturias (Spain) as a small group of friends who were passionate about singing. Over the intervening years the group has established a solid international standing, as attested by numerous awards and invitations to the finest festivals. LDO’s chief ambitions remain the search for acoustic beauty, the experiencing of polyphonic purity, and the community that emerges from assembled singing. Members are characterized by their enthusiasm and dedication: an irrefutable willingness to favour quality rather than quantity.

In Spain, LDO has participated in Cuenca’s Semana de Música Religiosa, with a standalone concert as well as Spem in alium with The Tallis Scholars conducted by Peter Phillips. Also noteworthy is LDO’s participation in the Festival Musika-Música, the Festival de Música Antigua in both Logroño and Aranjuez, the Festival Internacional ‘Arte Sacro’ in Madrid, and ‘Bilbao Arte Sacro’. The group has twice collaborated with the Centro Nacional de Difusión Musical, and has performed Mozart’s 'Coronation' Mass in Oviedo and León with the Mozarteum Orchestra Salzburg conducted by Leopold Hager.

LDO was awarded first prize at the 2014 London International A Cappella Choir Competition, beating off competition from choral ensembles from around the world. Other awards include the Gran Premio Nacional de Canto Coral in 2003 and 2006, the Città di Arezzo Grand Prize, and first prizes at the International Choir Contest of Flanders, the Certamen Coral Internacional de Tolosa, the Varna International May Choir Competition, and the Florilège Vocal de Tours. The group was selected by the Spanish Association of Classical Music Festivals for the Circuitos FestClásica 2020 award in the ‘Early Music’ category. 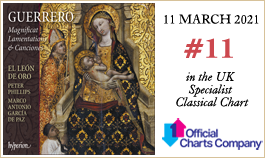