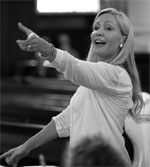 Suzi Digby OBE was born in Japan and lived in Hong Kong, Mexico and the Philippines before settling in London & Cambridge. She is an internationally renowned Choral Conductor and Music Educator. She has trailblazed the revival of singing in UK schools and the community over two and a half decades. Suzi founded and runs the following influential National arts/education organisations: The Voices Foundation (the UK’s leading Primary Music Education Charity); Voce Chamber Choir (one of London’s finest young Chamber Choirs); Vocal Futures (Nurturing young [16-22] audiences for Classical Music); Singing4Success (Leadership and ‘Accelerated Learning’ for Corporates) and The London Youth Choir (a pyramid of 5 choirs, 8-22, serving all ethnic communities in London’s 33 boroughs). February 2016 saw the public launch of her professional vocal consort, ORA (commissioning international choral works as ‘reflections’ of Renaissance masterworks). ORA’s debut album came in top of the new entries Classical Music charts in the UK. In 2017 she received an honorary degree from University of Aberdeen. Suzi is a visiting Professor at University of Southern California (Choral Studies).

As a conductor, Suzi’s 2011 debut with the Orchestra of the Age of Enlightenment (Vocal Futures’ Bach’s St Matthew Passion) was met with outstanding critical acclaim: 'Choral wizard', 'The mother of all music', The Telegraph; 'Sensitive and accomplished conductor', Musical America; 'A serious force for good within Britain’s music education system', New Statesman. Suzi annually conducts 2,000 voices in the Royal Albert Hall in a scratch Youth Messiah. In 2016 this was awarded Best Classical Music Education Initiative Nationwide by popular Classic FM vote.

In 2014, she launched one of the finest professional consorts in California, ‘The Golden Bridge’, which commissions Californian composers to reflect masterpieces of the English ‘Golden’ Tudor Age and of the European Renaissance.

Suzi is a Trustee of Music in Country Churches, among other music and education charities. She is Past President of the Incorporated Society of Musicians and was Acting Music Director of Queens’ College, Cambridge (where she founded and runs the Queens’ Choral Conducting Programme). Amongst many TV appearances, she was judge in BBC1’s hit show, Last Choir Standing with over seven million viewers. She regularly adjudicates choral competitions and gives workshops and lectures around the world.