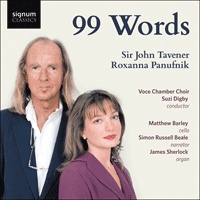 This album, a tribute to the life and legacy of Sir John Tavener, is built around his '99 Words to my darling children', first uttered at the composer's memorial service. Roxanna Panufnik's setting for choir and narrator is one of several first recordings included here.

I began to write Svyati in early 1995: while sketching it, Iearned that John Williams, father of Jane, my dear friend and publisher, was dying. I could not refrain from dedicating it to Jane and to the memory of her father.

The text is in Church Slavonic, and it is used at almost every Russian Orthodox service, perhaps most poignantly after the congregation have kissed the body in an open coffin at an Orthodox funeral. The choir sings as the coffin is closed and borne out of the church, followed by the mourners with lighted candles. The cello represents the Priest or Ikon of Christ, and should play at a distance from the choir, perhaps at the opposite end of the building. As in Greek drama, choir and priest are in dialogue with each other. Since the cello represents the Ikon of Christ, it must be played without any sentiment of a Western character, but should derive from the chanting of the Eastern Orthodox Church.

Roxanna Panufnik Heav'nly harmony
When Dean Close School approached me to write an anthem to celebrate the launch of their new, exclusively made and exquisite organ I turned to one of my remarkably generous ex-English teachers (especially since I failed my English Lit O’ level) to find a suitable text. These verses from Dryden’s A Song of Saint Cecilia’s Day (1687) couldn’t been more perfect—the mention of various instruments are easily expressed in the new organ’s many sublime stops and the drama of the poem ideally suits such a versatile and expressive instrument.

I would like to thank Dean Close for commissioning the piece, The Rt Hon David and Mrs Hicks Beach for supporting the commission and Alistair Langlands for introducing me to the delights of Dryden.

The piece is dedicated to Dean Close School and lasts approximately 6 minutes.

This set of Three Shakespeare Sonnets was one of the first works that I composed after serious illness in 2007. I wanted to pay tribute to my wife, Maryanna, who nursed me back to some degree of health, so I turned to the Shakespeare Sonnets. I was delighted to find that they brought forth music once again, after I had been silent for so long.

Roxanna Panufnik 99 Words to my darling children
Always having been an enormous fan of Sir John Tavener’s music, during a beautiful Service of Thanksgiving for his life and work at Westminster Abbey in June 2014, I was incredibly moved by his oldest daughter, Theodora, reading these ‘99 Words for my darling children, Theodora, Sofia and Orlando’. As well as being a deeply inspiring mantra for how he wanted his children to live their lives, there seemed to be so many parallels with my own personal history. Like Theodora, I had lost a composer father whose musical legacy is sometimes comforting but can also feel incredibly raw. Like Sir John and his wife Maryanna, I too have three children—two older girls and a younger boy. And these words sum up everything that I would wish upon my own children.

My immediate reaction on hearing the reading was a desire to set them to music and just as I was writing to Maryanna to ask her permission, conductor Suzi Digby OBE, contacted me and asked if I’d consider setting them for her Voce Chamber Choir.

The music I’ve written for this rocks gently, like a lullaby. The words are so important that I’ve made sure you hear everyone one of them by having them first narrated and then sung.

The cello represents John—supporting, encouraging and embellishing the words. I have been longing to write for cellist Matthew Barley for a considerable time so I’m deeply honoured that he is premiering this.

It is with enormous thanks to Maryanna, Theodora, Sofia and Orlando for letting me set these very precious words—I know it must have been a very tough decision and I am hugely grateful for their trust in me to do this. And thank you Suzi, for giving me the opportunity to do this.

Proceeds from this recording will go towards the Tavener Foundation, which promotes access to John’s and other classical music, as well as harmony through music, between faiths.

Sir John Tavener Threnos
Threnos (Lament) for solo cello was composed late in 1990, for Steven Isserlis. The title, Tavener writes, ‘has both liturgical and folk significance in Greece—the Threnos of the Mother of God sung at the Epitaphios on Good Friday and the Threnos of mourning which is chanted over the dead body on the house of a close friend.’ Tavener wrote his Threnos to commemorate the death of a close friend.

Roxanna Panufnik The tablet of your heart
When The Tablet asked me to write a motet to be performed at their 175th birthday mass (16 May, 2015, Westminster Cathedral, London), they specified two particular lines from the bible’s Book of Proverbs: 'Keep my commandments and live, keep my teachings as the apple of your eye; bind them on your fingers, write them on the tablet of your heart.'

Looking further at the surrounding verses, I was very moved by the warm and nurturing context in which these words were set and incorporated more of them. The action of ‘bind’ing them around fingers inspired me to create a winding and intertwining texture within the choir—each part singing an ancient Middle Eastern-sounding scale, wrapping the refrain in blanket of gently flowing harmonies.

The motet is dedicated to The Tablet on the occasion of their 175th birthday and lasts about 4’30”. I am so grateful to The Tablet for the commission and the inspiring words to set.

Maha Maya is a celebration of the Eternal Feminine; in the Great Mother of the Hindus, in the Maha Prajavati of the Buddhists (making the Mother of the Buddha the same primal Mother), and in Mary the Mother of Christ, seen in her universal aspect as Stella Matutina, and Mother of all the Prophets. The music is for double choir and organ, and is in three sections. The first choir sings two German texts: Ich sehe dich in tausend Bildern by Novalis (Baron Friedrich von Hardenberg, 1772-1801) in the outer sections, and Stella Matutina by the Sufi philosopher Frithjof Schuon (1907-1998) in the very tender central section. The second choir invokes Maha Prajavati, Maha Maya, and Stella Matutina throughout. The organ sounds on either side of the centre of the Tryptich, and represents (by using Harmonies of the Spheres, played fortissimo) the awesome and cosmic nature of the Eternal Feminine.

Signum Classics © 2017
notes by the composers and Michael Stewart (Threnos)