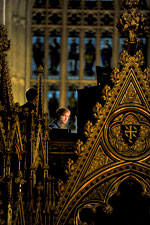 Robert Quinney is Sub-Organist of Westminster Abbey. In addition to his daily work at the Abbey he maintains a busy freelance schedule as a soloist and ensemble player. Since October 2009 he has been Director of Oundle for Organists, whose residential courses offer inspiring tuition for organists of all ages. He is also frequently to be heard performing with period ensembles such as The Sixteen, The English Concert, and The Cardinall’s Musick.

Robert Quinney read music at King’s College, Cambridge, where he was Organ Scholar from 1995 to 1998. After a year as Acting Sub-Organist at Westminster Abbey, he moved to Westminster Cathedral as Assistant Master of Music in September 2000. Since returning to Westminster Abbey in 2004 he has performed with the Abbey Choir on concert tours to the United States, Australia and Russia, on an acclaimed series of recordings for Hyperion, and at several televised services—including the Marriage of The Duke and Duchess of Cambridge in April 2011. He directed the Abbey Choir for the Michaelmas term of 2010, during which period he led première performances of choral works by Richard Rodney Bennett, Jonathan Dove, Grayston Ives and Matthew Martin.