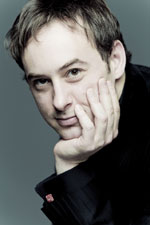 During the 2021/22 season Jonathan directed a number of Baroque masterpieces: Handel’s Messiah with Rotterdam Philharmonic and Les Violons du Roy, and Bach’s St Matthew Passion with Arcangelo (BBC Proms). He returned to the Budapest Festival Orchestra for a programme of Scarlatti, Vivaldi and Handel, and to the Philharmonia Baroque Orchestra in the US to conduct Locatelli, Vivaldi, Bach, Handel, Mozart and the premiere of Paul Stanhope’s Giving ground. Other engagements include return visits to Glyndebourne Festival Opera and the Handel and Haydn Society for Handel’s Alcina. With Les Violons du Roy, he directed projects with Avi Avital and an all-Mozart programme with Sandrine Piau.

In 2010 Jonathan founded Arcangelo, which strives to perform high-quality and specially created projects. He has toured with them to exceptional halls and festivals, including London’s Wigmore Hall, the Berliner Philharmonie, Kölner Philharmonie, Vienna Musikverein, Salzburg Festival and New York’s Carnegie Hall. The group made its Proms debut at the Sam Wanamaker Playhouse in 2016 and returned to the Proms in 2018 to present Handel’s Theodora to a sold-out Royal Albert Hall, as well as a further performance of the opera at the Vienna Konzerthaus in 2020.