If only Marc-André Hamelin had been resident in Paris in 1837. On the evidence of Liszt & Thalberg Opera transcriptions & fantasies (including the multi-authored Hexaméron), the outcome of any pianistic tournament in which he participated could never have been in serious doubt. With a seemingly effortless technique wholly at the service of the music, countering its most outrageous demands with clarity and lucidity, Hamelin remains absolutely unique, as September's Record of the Month demonstrates once again. The two Shostakovich Cello Concertos must come near the top of the list of great twentieth-century works written for the instrument, and both have been central to every cellist's repertoire since the glory days of Mstislav Rostropovich. These new accounts from Alban Gerhardt—with Jukka-Pekka Saraste and the WDR Sinfonieorchester—are set to join a select few of the most distinguished.

Their very first album having won a Gramophone Award in 2019, expectations are naturally high ahead of their second: Luís Toscano and Cupertinos now turn their attention to perhaps the pre-eminent figure from the Golden Age of Portuguese polyphony with an album of Masses, Responsories and motets by Duarte Lobo; a wonderful programme demonstrating the ensemble's consummate musicianship to best effect. And the delights of English chamber music from the dawn of the twentieth century are revealed by Piers Lane and the Goldner String Quartet in Piano Quintets by Thomas Dunhill & Frédéric d'Erlanger. The composers' names may now be little known, but the neglect is unjust: this is engaging and memorable music which requires no apology.

On Signum Classics Michael Finnissy's Pious Anthems & Voluntaries brings to fruition a three-year residency for the composer with St John's College Choir Cambridge. Directed by Andrew Nethsingha, these extended responses to, and reworkings of, masterpieces by John Taverner, Thomas Tallis and Michael Tippett intertwine with a Bachian cantata to create a whole so much greater than its parts.

In Journeys to the New World on Signum, the members of The Queen's Six present an opulent programme of works by eight composers whose music spanned the gap from Old Spain to New Spain. Four of them never went to the New World, though their music did; three more were born and trained in Spain, later emigrating to the new colonial cities; and the last became the first composer-choirmaster to be born in the New World of Spanish parents.

Eric Whitacre's The Sacred Veil is a narrative of courtship, death, grief and eventual recovery, a project undertaken in collaboration with poet, writer and long-time friend Charles Anthony Silvestri, whose wife Julie it commemorates. Performed by the Los Angeles Master Chorale under the composer's baton, this new Signum album is as uplifting as it is thought-provoking and unsettling. 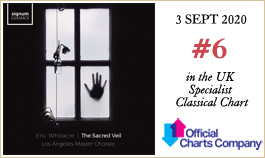 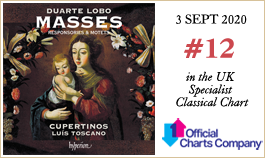 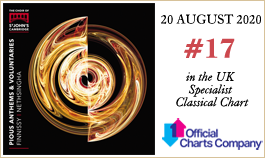