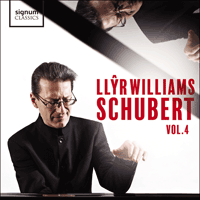 Schubert's two sets of impromptus, the second arguably a sonata in all but name, date from 1827, the year before the composer's death. These lovely performances were recorded live in Cardiff in 2018.

Four Impromptus D899 Op 90
Schubert conceived two sets of Impromptus in 1827, a miraculous year that included the two piano trios and the completion of Winterreise. The title 'impromptu'—meaning a short keyboard piece with an improvisatory character—had earlier found its way into Viennese musical circles following the publication in 1822 of Six Impromptus by Jan Václav Voříšek (1791-1825). Perhaps its success prompted the rising publisher Tobias Haslinger to issue the first two of Schubert’s D899 group with the heading 'impromptu' when they were printed in December 1827. Despite the title, there is little that can be considered 'impromptu' about these works which, whilst contemporary with the desolation of Winterreise, reveal an equable mood and, at times, a serenity of spirit.

The first of the impromptus, in C minor (the most substantial of the group), opens with a resolute, march-like theme, initially sapped of all vitality, and leads to two related themes. But it is the emotional ambiguity between resignation and stubbornness that gives expressive shape to its structural logic. The second impromptu, in E flat major, is a featherlight, easy-going affair (notwithstanding disturbing shifts to the tonic minor) and yields to a boisterous central episode, its bluster returning for the accelerating final bars. Hints of paradise suffuse the third impromptu—now in the warm embrace of G flat major—and the set ends with one of his most popular creations; the Allegretto in A flat where surface glitter hides a contrived sparkle inhabited by a composer with just over a year to live. In these wonderful pieces there’s no better place to find Schubert 'smiling through tears'.

Four Impromptus D935 Op 142
It is a legitimate question why Schubert’s second set of four Impromptus, D935, is not considered as a four-movement sonata. Even shortly after Schubert ‘s death it was suggested that he divided the work into four separate movements for commercial reasons, rather than artistic ones. However, there are other indications to suggest that Schubert intended these four movements as a continuation from his previous set of four Impromptus, D899, as he originally numbered them 5-8. The second set of impromptus was published in 1839, eleven years after Schubert’s death, with a dedication by the publisher to Franz Liszt. Both sets were written in 1827, a year before Schubert died.

The first impromptu is in rondo form, in five sections, A1-B1-A2-B2-A3. During the B sections a beautiful effect is obtained by the left hand playing alternately in the lower and upper registers of the keyboard, while the right hand maintains steady semiquaver arpeggios. The second impromptu is a minuet, with a contrasting trio. The third impromptu is a theme and variations. The theme resembles a melody from Schubert’s incidental music to the play Rosamunde. The variations progress in Beethovenian fashion with increasingly complex divisions and ornamentation. The deeply emotional fourth variation begins with a staccato theme using a hemiola pattern of three beats against two, then modulates to keys remote from the tonic F minor such as A flat minor, C flat minor and A major. A lengthy chromatic meditation leads into a vigorous coda.