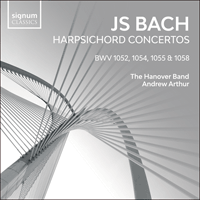 Johann Sebastian Bach’s seven concertos for solo harpsichord & strings, BWV1052-1058, occupy a significant place in the history of music, marking as they do the origin of the keyboard concerto genre—the start of a direct line through his sons, Carl Philipp Emmanuel and Johann Christian Bach, to Haydn, Mozart and beyond. Collectively, they encompass the gamut of Baroque rhetorical expression; indeed, leaving aside the six ground-breaking ‘Brandenburg’ Concerts avec plusieurs instruments, it is difficult to think of a more diverse, revolutionary and technically refined set of instrumental concertos from the Baroque period.

It is not known precisely when these keyboard concertos were composed but it is clear that they are closely linked to Bach’s time in Leipzig. The principal extant source is that of a rough ‘working’ autograph manuscript dating from circa 1738 which initially presents a numbered set of six concertos, BWV1052-1057 (ie, a complete opus) followed by BWV1058 and an additional fragment, catalogued as BWV1059. Although scholarly opinion remains divided, it is generally accepted that at least some of the concertos contained therein are revisions of existing keyboard concertos from the early 1730s or re-workings of other instrumental works and cantata movements featuring violin, woodwind instruments or organ as the solo voice. But whatever their provenance, these works, together with the Triple Concerto, BWV1044, Brandenburg Concerto No 5, BWV1050 and the concertos for two, three and four harpsichords, BWV1060-1065, represent the culmination of Bach’s innovative long-term exploration of the harpsichord’s potential as a concertante instrument.

It seems most likely that the harpsichord concertos were first intended for performance by members of the Collegium Musicum, Leipzig’s famous bourgeois music society founded by Telemann in 1702, whose regular concerts Bach directed (typically from the violin) between 1729-1741. The routine indoor setting for these performances—Gottfried Zimmermann’s Leipzig coffee-house on Katherstrasse—certainly would have provided an ideally sized space for the harpsichord(s) to be heard successfully in a soloistic capacity alongside the single string forces that were typically employed for these events. Moreover, Zimmermann’s sponsorship of the Collegium Musicum stretched to the provision of some fine new instruments—including violoncellos, violones and harpsichords—the latter of which, no doubt, would have provided an impetus to showcase these keyboard concertos alongside other chamber works which featured the harpsichord in an equal partnering obbligato role with the violin (BWV1014-1019), viola da gamba (BWV1027-1029) and flute (BWV1030-1033).

There is no doubt that Bach’s harpsichord concertos owe much to the composer’s earlier forays into the instrumental Italian concerto form during his early employment as a court musician in Weimar (1708-17). His patron at the time, Johann Ernst III, Duke of Saxe-Weimar (himself an accomplished amateur violinist, keyboard player and composer), undertook a period of study in Utrecht from where he is known to have had sent back to Weimar a number of collections of new Italian music, including Vivaldi’s celebrated set of twelve concerti, L’estro armonico, Op 3, first published in Amsterdam in 1711. Bach evidently undertook a scrupulous study of these new compositions as, whether through self-motivation or at the behest of his Patron, he set about transcribing, for solo organ and solo harpsichord, several of the concertos from Vivaldi’s Op 3, alongside a number of other Italian composers’ works, most notably those examples by Corelli and Marcello. Whilst these virtuoso transcriptions make no use of accompanying instruments, they nonetheless represent the first examples of solo keyboard music presented in concerto form—models which, no doubt, provided a point of departure for Bach’s original keyboard work, the Italian Concerto, BWV971, published in Leipzig in 1735. And it is surely not too fanciful to suggest that these early keyboard concerto transcriptions may have sewn the initial seeds of inspiration behind Bach’s later concertos for harpsichord & strings; the structural and stylistic influence of the Italian style upon these works is unmistakable and, as late as 1730, Bach completed an ambitious transcription of a further concerto from Vivaldi’s Op 3 collection—this time the concerto No 10 for four violins, recast here as the Concerto for Four Harpsichords & Strings, BWV1065.

The Concerto in D minor, BWV1052 with its opening angular, syncopated unison theme is arguably the most dramatic and musically developed of Bach’s concertos for harpsichord & strings—tempestuous in its affect, bold in structural scale (it is one of the longest of all concertos of the Baroque period) and breathtaking in its virtuosity. It has been argued that it may be a transcription of a lost original violin concerto and a number of reconstructions in this vein have been attempted. More recent scholarship has moved away from this conclusion however and Christoph Wolff has asserted that BWV1052 is in fact a re-working of an existing keyboard (organ?) concerto, BWV1052a, in which Bach’s son, Carl Philipp Emmanuel, appears to have had a hand.

Material from all three movements of BWV1052 also appears within Bach’s cantata oeuvre: the outer movements are employed as instrumental sinfonias to Wir müssen durch viel Trübsal, BWV146 and Ich habe meine Zuversicht, BWV188 respectively (scored, in both cases, for solo obbligato organ, three oboes, strings and continuo) whilst the poignant central Adagio (which also appears in BWV146) is re-fashioned as a chorale-setting—its harmonically unsettled unison string writing providing the framework for a highly expressive four-part vocal chorale harmonization, in the midst of which the florid coloratura-style solo line is assigned to the right hand of the organ part. Even by Bach’s standards this Adagio stands out as being one of exceptional harmonic expressivity and, in the context of BWV1052, its gravity provides the perfect counterfoil to the irrepressible Italianate energy of the final Allegro whose persistently vital rhythmic figures are presented in a virtuosic, quick-fire dialogue between strings and keyboard to exhilarating effect.

The Concerto in D major, BWV1054 is a re-working of Bach’s much-loved Concerto for Violin in E major, BWV1042 thought to date either from the composer’s time in Cöthen or during his early years in Leipzig. The decision to transpose the key of the original down a tone to D major was a practical consideration; whereas solo violin parts often made prominent use of e''' as the highest note of a given passage, the compass of the keyboard on those harpsichords available to Bach during his time in Leipzig extended only to d'''. Thus, by transposing the concerto down a tone it avoided the need to transfer several passages of the solo material to a lower octave. In the case of this particular concerto, the transposition results in a further satisfying outcome (for the player, at least), namely that the entire range of the harpsichord from GG to d''' is utilised within the solo keyboard part.

It is important to note however that BWV1054, particularly in the case of the outer movements, demonstrates far more than just an act of transcription—rather it exhibits a detailed and, at times, highly virtuosic re-working of the (already complex) original solo violin part into writing which is truly idiomatic for keyboard and which exploits the tonal brilliance and percussive qualities of the harpsichord to the full. By huge contrast the rather more literal transcription of the Adagio e piano sempre offers testament to Bach’s evident confidence in the harpsichord’s capacity to sustain an expressive cantabile melody. Far from seeing the limited dynamic range of the instrument as any kind of barrier, he turns it to great musical advantage in this exquisite movement by demanding an intensely intimate approach on the part of the accompanying string ensemble.

The Concerto in G minor, BWV1058 is also a transposed arrangement of an original work for violin—this time the Violin Concerto in A minor, BWV1041 dating from circa 1730 and thus, also likely written for the Collegium Musicum. In some respects, the refined idiomatic writing for keyboard in BWV1058 goes further still than that found in the outer movements of BWV1054; here, in those instances during the soli passages where the right hand is engaged purely with the original violin melody, the fully integrated imitative figuration assigned to the left hand goes well beyond a mere doubling of the continuo bass-line. And, during the course of the final 9/8 Gigue, the expansion of the solo part with its brisk scalic passagework and keyboard imitation of violin bariolage technique results in a free-flowing dialogue between left and right hands. The central ostinato-based Andante also offers a significantly developed version of the original solo violin part. Once again, the lyrical capabilities of the harpsichord are showcased, though the serenity of the melodic writing stands in contrast to the bold, percussive texture which arises from the keyboard’s fully written out (as opposed to figured) chords in the robust tuttis.

The Concerto in A major, BWV1055 is surely one of the most exuberant and openly joyous of Bach’s keyboard concertos. Numerous scholars have hypothesised that its origins may lie in a now lost concerto for oboe d’amore. But, as the late Richard Maunder so refreshingly contested, ‘it is by no means clear […] that BWV1055 […] necessarily led a previous existence of which no evidence has survived.’

Indeed, the relationship between the writing for harpsichord and the accompanying strings in this concerto is often strikingly different to that of the other pieces recorded here, so much so as to suggest original compositional intention rather than after-the-fact transcriptive adaptation. The ‘vertical’ spiccato string writing of the opening Allegro seems consciously designed to work in tandem with the arpeggiated harpsichord figuration in the interest of constructing one complete interdependent texture, rather than placing soloist in opposition to the accompanying instruments. Furthermore, as the movement progresses, an occasional equal partnership between solo harpsichord and solo violin emerges (evidenced also in two other harpsichord concertos, BWV1053 & 1056) which is highly reminiscent of the trio-sonata textures explored in the composer’s Six Sonatas for Violin & Obbligato Harpsichord, BWV1014-1019. This close relationship between violin and keyboard is further developed (albeit now with additional chordal realisation from the 2nd violin and viola) throughout the effortlessly flowing soli passages of the Larghetto—a remarkable, languishing Siciliano in F sharp minor. In the Allegro ma non tanto finale, the virtuosic cascading scalic passages of the ritornelli appear tailor-made for the effervescent, pointed timbre of the harpsichord; the staccato string chords heard later in the movement provide textural clarity through which the dancing triplets of the keyboard penetrate with ease, and the translucence of the ‘choir’ of upper strings which Bach employs in the other soli passages provides an exquisitely judged halo-like accompaniment to the harpsichord’s cheerful ornamented song.