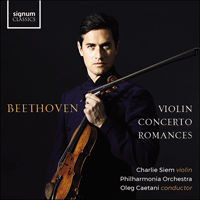 Having been by all accounts somewhat reluctantly taught the violin from the age of five, it may or not be a surprise that Beethoven went on to write relatively little specifically for the instrument. Here we have the one completed violin concerto—from 1806, the height of his so-called 'heroic' period—and two 'romances' from around ten years earlier.

Vienna, Franz II’s city. ‘There one might see elegant men dressed in silk, with their thin stockings and buckled shoes, army officers fresh from the Balkan, Italian, or Belgian campaigns, commoners in sober, black clothes, and Capuchins in brown cowls. One was jostled by carriers of sedan chairs in which sat distinguished ladies; one was importuned by toy-sellers whose wares had been carved in low huts on the Slovakian mountains. There were Italian merchants, Hungarians in the tight trousers and feather-rufted hats of their national costume, smiling girls selling violets in baskets … a youth of twenty-two with a dark pock-marked face, black eyes, and black hair streaming in the wind … high domelike forehead, flat nose, and teeth that pushed his lips outward.
Max Graf

Beethoven’s Violin Concerto, midway between the Mozart canon and Mendelssohn, was the 19th century’s first great example of the form. Completed in two months (few sketches survive), it was introduced by Franz Clement at the Theater an der Wien, 23 December 1806, apparently at sight and without rehearsal. Legend has it that the first movement was separated from the (linked) second and third with trickery and sundry diversions. The original handbill reads differently, the new opus featuring in the concert’s opening half between a Méhul overture and Mozart aria. ‘A born genius’, Clement (1780-1842) was director and concertmaster of the Theater—opened in 1801 and still in use today, the ‘Wien’ of its name referring to the river from the Vienna Woods that once flowed by. ‘His [style],’ the Leipzig Allgemeine musikalische Zeitung admired, ‘is not the marked, bold, strong playing, the moving, forceful adagio, the powerful bow and tone [familiar from the Franco-Latin] Rode-Viotti School; rather, his playing is indescribably delicate, neat and elegant; it has an extremely delightful tenderness and cleanness that undoubtedly secures him a place among the most perfect violinists.’ In April 1805, under Beethoven’s direction, he led the premiere of the 'Eroica', in a programme including additionally the (better received) first performance of one of his own concertos.

Degas one day said to Mallarmé: 'I cannot manage the end of my sonnet, and it is not that I am wanting in ideas.' Mallarmé, softly: 'It is not with ideas that one makes sonnets, but with words.' So it is with Beethoven. It is in the quality of his musical material and not in the nature of his ideas that his true greatness lies.
Igor Stravinsky

Beethoven revised the solo part extensively, his final thoughts dating from April/May 1807 while working/collaborating on an arrangement for piano and orchestra (the only innovation of which was a developmental first movement cadenza incorporating militaristic timpani). To what extent Clement may have had a hand in Beethoven’s changes is unclear. Detailing correspondences between his own 1805 concerto (published 1806/07) and Beethoven’s, both in the same key, Clive Brown (2008) is of the opinion that ‘Beethoven had Clement’s style of violin playing clearly in mind … the resemblances between Beethoven’s and Clement’s concertos go far deeper than the general character of the violin writing, suggesting perhaps a hidden dialogue between the two composers. Both works are externally similar. They both employ the same instrumentation [the usual classical complement but with only a single flute and omitting trumpets and drums in the slow movements] … In addition, they exhibit a similar approach in their treatment of the solo instrument, and there are even many individual figurations in Beethoven’s Violin Concerto that appear to allude directly to passages in Clement’s concerto’.

[In Beethoven] the dreamer will recognise his dreams, the sailor his storms, the wolf his forests.
Victor Hugo

In 1807 Clement repeated the Concerto twice (23, 26 December). Aside from an uncredited 1816 listing in the Grosser Redoutensaal, it was not heard again in Vienna during Beethoven’s lifetime. The Zeitung für Theater, Musik und Poesie (8 January 1807) filed a disparaging report: ‘The verdict of the cognoscenti is unanimous: they conceded [the music] has some beauty, but maintain that the continuity is often completely fragmented, and that the endless repetition of some commonplace passages might easily prove wearisome. They assert that Beethhofen [sic] could put his undoubtedly great talents to better use.’ Modern opinion—since the occasion in early-Victorian London when, under the baton of Mendelssohn, it was revived by the twelve-year-old Joachim for his Philharmonic Society debut, 27 May 1844 (to ‘prolonged and rapturous applause’)—begs to differ.

Beethoven’s Concerto is Janus-faced, looking both ways: Classical in its architecture and language and yet innovative in its proportions and breadth of vision. It is not yet Romantic, albeit romantic, but opens up a path for later composers to explore.
Andrew Manze

Combining facets echoing the groundplans of Mozart’s keyboard and fiddle concertos, the first movement—launched audaciously by a bar of soft drum taps, nothing else—is an expansive sonata design, the accent not so much on individual subjects as a pair of open-ended thematic groups tonally and rhythmically energised. Unfurled out of the cadenza (Kreisler’s in this recording, nobilmente), the tranced closing section remains for ever miraculous, a lingering farewell where violin and orchestra entwine in an ethereal dialogue of sublime stillness. The song of this Allegro is matched by that of the G major Larghetto—a tonally motionless dream-like sequence of 91 bars unviolated by the Napoleonic battlefields of its time or locale. Ostensibly it is a set of variations, but such impression is contradicted half way through when the soloist (unmuted against sordino orchestral violins) enters suddenly with an entirely new idea, cantabile on the G and D strings. Galanteries and fantastical images, tumbling among waterfalls of brightly rainbowed sound, course through the concluding 6/8 sonata-rondo, music of bacchanalian pastures and gruff humour. Dance-like in its refrain (possibly borrowed from Clement) and the à la chasse style of its hunting-horns, reflective in the violin and bassoon conversation of its G minor central episode, teasingly denying (for example the extraordinary, if precedented, resolution of the final cadenza in A flat, remotest of keys relatively), the vibrancy of its life cannot be stilled.

In playing Beethoven the violinist should be a medium. There is little that is personal or that can be reduced to ingratiating sounds, pleasing slides and so on. Everything is dictated by the significance, the weight, structure and direction of the notes and passages themselves.
Yehudi Menuhin

Apart from the incomplete Allegro of a Violin Concerto in C (Bonn, 1790-92), an abandoned Concertante in D (1802), the Triple Concerto of 'Eroica' fraternity (1803-04), and the Benedictus of the Missa Solemnis, the only other works Beethoven left for violin are the two Romances with small orchestra Opp 40 and 50 from 1800-01 and 1798 (or 1795), printed in 1803 and 1805 respectively. Early ventures, these are precisely what their name implies—romances not adagios, portraits without specifics, verdant yet smoky. Within the opening a cappella phrase of the First murmurs the impulse from which the Kreutzer Sonata and Fourth Piano Concerto sprang. Lurking among the pages, 195 bars in all, legacies of old baroque affekt might be fancied. G major, symbolic of ‘things rural, idyllic and pastoral; all calm and peaceful passions; the deepest gratitude for sincere friendships and true love’ (Schubart). The Second is in F major, ‘the most high and noble feelings are here so easy as to be compared with a beautiful person who succeeds in everything he tries’ (Mattheson). Beethoven, arch lyricist, his particularisation of title (rare but not unknown—most obviously the slow movement of Mozart’s D minor Concerto, a work he admired, played and composed cadenzas for) harking back to an unfinished boyhood Romance cantabile (piano, flute, bassoon) written in Bonn in 1786—an emotionally awakening fragment. Less Haydn’s swarthy ‘Grand Mogul’ than a man of yielding countenance enamoured with a young countess arrived from Trieste. Julie Guicciardi, la bella Guicciardi, turning seventeen, hair dressed à la Titus. ‘I’m out and about again, among people … [my change of life] brought about by a dear charming girl who loves me and whom I love. After two years, I am again enjoying some blissful moments, and it is the first time that—that I feel marriage might bring me happiness. But unfortunately she is not of my station—and now—now I certainly could not marry.’ (16 November 1801).

Beethoven broke all the rules, and turned out pieces of breath-taking rightness. Rightness—that’s the word! When you get the feeling that whatever note succeeds the last is the only possible note that can rightly happen at that instant, in that context … Our boy has the real goods, the stuff from Heaven, the power to make you feel at the finish: Something is right in the world … something we can trust, that will never let us down.
Leonard Bernstein