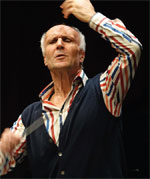 Oleg Caetani, one of the greatest conductors of his generation, moves freely between symphonic and opera repertoire. Caetani has conducted all over the world including: the Mariinsky Theatre in Saint Petersburg, the Royal Opera House in London, the Opera House in San Francisco, the Musikverein in Vienna, Lincoln Center in New York, the Suntory Hall in Japan, the Sydney Opera House, the Accademia of Santa Cecilia in Rome, the Staatskapelle Dresden, the Munich Philharmonic, the Mozarteum Orchester in Salzburg, the Svetlanov Symphony Orchestra of Russia, La Scala in Milan, the Yomiuri Orchestra in Tokyo, the Sydney Symphony and the Montreal Symphony Orchestra. He has worked with the greatest soloists in our day including: Marta Argerich, Sviatoslav Richter, Danil Trifonov, Vadim Repin, Misha Maiisky, Gautier Capucon, Viktoria Mullova and Emmanuele Pahud.

Caetani considers Nadia Boulanger to be the driving inspiration of his career. She discovered his talent, initiated him into music, and gave him the philosophical approach to life linked to Montaigne, that he still has today.

Oleg was chief designate at the ENO in 2005, chief designate 2002-2005 for the Melbourne Symphony Orchestra and Music Conductor and Artistic Director for the same orchestra from 2005 to 2009. Before that, Caetani was the Principal Conductor for the Staatskapelle Weimar, First Kapellmeister of the Frankfurt Opera and GMD in Wiesbaden and in Chemnitz.

Shostakovich’s music plays a central role in his repertoire. Caetani translated the libretto of The Nose from Russian into German for his production in Frankfurt in 1991; he conducted the Italian premiere of the operetta Moscow Cheriomushki in 2007, and has conducted the first performances in many different countries of Shostakovich’s operas, concertos, ballets and suites, as well as having recorded the first Italian complete cycle of Shostakovich symphonies with the LaVerdi Orchestra in Milan. Their albums have won several prizes: 10/10 from Classical Today in the USA, Télérama in France and Record Geijutsu in Japan. His recordings of Tansman’s Symphonies, released by Chandos, won three Diapason d’Or in 2006 and 2008; his Gounod's Symphonies for CPO (including the 3rd Symphony, discovered by Caetani) also won a Diapason D'or in January 2015.