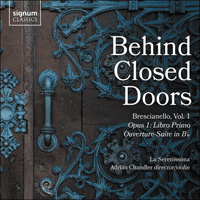 The music of Brescianello shows a strong debt to Vivaldi, but with more than a hint of the Germanic thoroughness he would have encountered during his long tenure as Oberkapellmeister of the Württemberg court during the middle of the eighteenth century. His surviving output is of an exceedingly high quality, as this new album makes abundantly clear.

The title for this recording was inspired by the situation in which many ensembles and musicians found themselves after the arrival of the devastating Coronavirus pandemic in 2020. Countries were locked down; concerts and recordings were cancelled; musicians everywhere were out of work.

On 18 February 2020, a small contingent of La Serenissima finished recording the album Settecento. This was to be the last music the ensemble would play until reconvening to record this first volume of Brescianello’s Opus 1. Although some musical events were able to go ahead during the summer’s brief respite from the pandemic, La Serenissma’s entire schedule was either cancelled or postponed. This was a most uncertain period for our musicians. Our first act after the nationwide lockdown was to set up a hardship fund for members past and present; we then set about preparing the ensemble to survive a year of silence. Despite everything, there were positives: musicians finally had all the time in the world to practice, and I found that the enforced sabbatical period enabled me to focus on the study and editing of many Vivaldi concertos, a project that was long overdue.

Trying to second-guess the inevitable effects that the pandemic would have on our industry made us all wish for a crystal ball. Although the rhetoric from the British government was mainly upbeat concerning the re-opening of the economy, those of us whose heads weren’t in the clouds could see another wave of Covid-19 brewing on the horizon that would inevitably disrupt the following concert season of 2020-21.

For an entirely freelance orchestra, with no geographical bias or ‘home’ for the band to work from, the pandemic was particularly hard-hitting. The stagnation of La Serenissima’s schedule endangered the visibility of the ensemble and threatened decades of work that had been spent building our style and tightknit ensemble playing. We desperately needed a project to address these concerns, and just as importantly, we needed a project to improve our team’s mental health and financial prospects. As concerts were out of the equation, we turned our attention to creating a patch of recording sessions.

How we were going to pay for these sessions was another issue, particularly as La Serenissima did not receive any grant from the UK government’s Cultural Recovery Fund in 2020. Furthermore, opposition parties had begun clamouring for a ‘circuit-breaker’ lockdown in response to the deepening crisis as we headed into the autumn period. Despite the supposition that musicians would still be able to meet in order to rehearse and record in such an event, the threatened closure of the hospitality industry would have scuppered all our plans, as a daily commute to Somerset would have been impossible for our far-flung team. With so much uncertainty in the air, the project was organised late in the day; even the musical editions were finished in the final fortnight leaving precious little time to learn our notes!

In spite of everything, and with the support of some notably generous individuals—to whom we are hugely indebted—five days of rehearsals and recording finally went ahead observing strict Covid-19 protocol. The Brescianello took four days; a fifth day was spent working on a future release of Vivaldi. Working together for the first time in eight months with social-distancing on entirely new repertoire was a tall order, but one that was hugely enjoyable after months of silence.

It wasn’t just the viability of the project itself that was uncertain, but the choice of repertoire too. There was already a fully-funded Vivaldi project ready to go, but this would have required several artists to travel from countries then deemed unsafe by the British government; there were also options for programmes of instrumental music by a medley of other composers. In the end, I felt that the first half of Brescianello’s Opus 1 (with one of his orchestral suites) was the right musical choice. We have never previously recorded a whole opus by any composer, as I have felt this approach to be a little sterile; instead, we have always focused on programmes that have hitherto been brought to the concert platform, giving more variety to the listener. Furthermore, the obvious collections that a group like La Serenissima might choose to record, such as Vivaldi’s Opus 3, 4, 8-12, have already been recorded many times; Brescianello’s Opus 1 on the other hand, has seldom seen the light of day.

Compared to Vivaldi, Brescianello is a composer whose music languishes in relative obscurity. Whilst the mists of time have claimed some composers’ music for justifiable reasons, Brescianello’s music presents many compelling arguments for its restoration. Having first included Brescianello in our 2014 season, we have since staged his opera Tisbe, recorded a violin concerto (on the album Extra time), a trio sonata (Settecento) and other works. Thanks to the Coronavirus pandemic, we have now been given the opportunity to start our exploration of this wonderful publication.

Relatively little is known about Brescianello’s early life. He is understood to have been born in Bologna but the earliest documentary evidence concerning his whereabouts finds him in Venice (1714) working as a valet for Therese Kunegunde Sobieska, the music-loving exiled electress of Bavaria. Once activities at the Bavarian court resumed following the Treaty of Baden at the end of the War of the Spanish Succession, the electress wrote to her husband Maximilian II Emanuel, proposing that he should employ Vivaldi as his Kapellmeister. Although this idea was dismissed on grounds of cost, Theresa was able to return to Munich in 1715 with Brescianello amongst her retinue; the court records list him as a violinist in the Bavarian Hofkapelle.

It wasn’t long before Brescianello was on the move again. Following the death in 1716 of Johann Christoph Pez, Oberkapellmeister of the Württemberg court (in Stuttgart), Brescianello successfully applied for the post of Director musices. Even though his initial brief was to take charge of the court’s chamber music, Brescianello, perhaps with one eye on the post of Oberkapellmesiter, decided to dedicate his ‘opera pastorale’ Tisbe to Duke Eberhard Ludwig in January 1718; he eventually succeeded to his preferred position in 1721. Although Brescianello’s fortunes ebbed and flowed in tandem with those of the court (he lost his post completely between 1737 and 1744), he remained in nearby Ludwigsburg until his death in 1758.

He was not a prolific composer by the standards of the time, but his surviving output is of an exceedingly high quality. It is surprising that the Opus 1 was the only set of works that Brescianello chose to publish; collections such as these would surely have spread the news of his talents far and wide. Indeed, one such ambassador of virtuoso violin music, Johann Georg Pisendel (leader of the Dresden court orchestra and pupil of Vivaldi) had access to this set and several other works by Brescianello.

The collection was published in Amsterdam (c1727) by Le Cene, arguably the most in-demand of the contemporary European musical printing houses, sought after by the likes of Albinoni, Corelli, Tartini, Valentini and Vivaldi. The set is made up of twelve works that are divided into two books, each consisting of three concertos for violin and strings, and three Sinphonie for strings alone (although the slow movement of the final Sinphonia is scored for solo violin and upper strings). The works show a strong debt to Vivaldi—in particular the concertos of L’Estro armonico (Opus 3) and La Stravaganza (Opus 4)—but are also fused with a Germanic thoroughness in their harmonic outlook.

Unsurprisingly, the dedication is inscribed to his patron and employer Eberhard Ludwig, Duke of Württemberg and hunting fanatic. Having fought on the side of the Austrians against the French during the War of the Spanish Succession as field marshal of the Swabian troops, it is unsurprising that the music of his court looked more towards Italy rather than France. That said, Eberhard was no stranger to the French style as he is reported to have visited Louis XIV at Versailles shortly before 1700; one wonders if this visit made a profound impression upon his artistic tastes, perhaps prompting Brescianello to compose a collection of six orchestral suites and a stand-alone chaconne in the French style. Like the other works in the set (apart from the D major suite that concludes with a massive Ciaconna) the B flat major suite is made up of a French overture followed by a suite of dances, finishing with a lively Giga or Gigue.