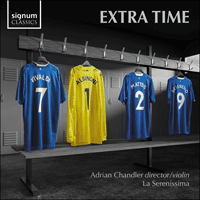 More glorious Baroque high jinks from the sparkling players of La Serenissima, including concertos by Vivaldi and Brescianello, a double-trumpet sinfonia by Albinoni, and two opulently scored ballet suites by Nicola Matteis the Younger. 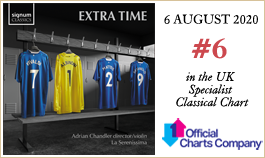 This album started life in 2015 whilst recording Vivaldi’s Four Seasons. Having recorded all the planned music 25 minutes ahead of schedule, I decided to try to do the impossible and record Vivaldi’s Concerto per la Solennità di S Lorenzo (RV286) in the remaining time. This concerto, one of several works written by Vivaldi for the feast day of this saint, was supposed to have been recorded as part of a collection of Vivaldi’s sacred works the previous year, but a cashflow problem meant that we had to opt instead for a much cheaper chamber programme, subsequently released as Per Monsieur Pisendel 2.

As there were only 25 minutes available to record a 13-minute concerto, we could only record the outer movements twice and the middle movement once with a couple of extra patches. Both our recording engineer Simon Fox-Gál and I were surprised by how good the results were; we’ve not managed this feat before or since!

The next addition to the disc came about by accident. In 2016, we recorded The Italian Job, and (as I have done all too often) I overestimated the amount of music that was needed. The disc was originally supposed to have included the sinfonia to La statira by Albinoni, one of only three operas by the composer to survive complete (he wrote over fifty). The music is a reworking of the sinfonia to the serenata Il Nome glorioso for solo trumpet and strings that we recorded in 2012 as part of the album Venice by Night. This new version is transposed from C into D major and includes freshly written material for a pair of oboes and an extra trumpet. The highlight, however, is Albinoni’s new slow movement which, with its rare pizzicato bass, is one of the jewels in Albinoni’s crown.

The Italian Job was unusual in that it needed exceptionally large forces for a work by Torelli. As we had the rare luxury of four trumpets, drums, two oboes, and two bassoons in addition to the usual strings and continuo, I tagged a similarly-scored movement of a ballet suite from Caldara’s 1722 opera Scipione nelle Spagne onto the end of these sessions. As with most operas written for the imperial court of Charles VI in Vienna, a different composer supplied the ballet suites that were normally positioned at the close of acts. From 1714 this duty fell to the Anglo-Italian composer, Nicola Matteis the Younger. Born around 1678, Matteis had grown up in Purcell’s London and the English master’s music exerts a strong influence on Matteis’ style. It is likely that at least Matteis’ father knew Henry Purcell as the two men were to have served together on the staff of the proposed Royal Academy in 1695, alongside Draghi, Keller and Finger.

By now we had the makings of a (slightly eccentric) album, particularly if you included a later version of the Vivaldi violin concerto in B flat (RV365). This concerto, that had never been recorded before (which is bizarre considering its high quality), was the last item on our 2011 album Vivaldi: The French Connection 2. It was not unusual for Vivaldi to rework or revisit his concertos in order to adjust the music for a different occasion, or perhaps for another soloist. These variants are often confined to obscurity, usually because publishing houses print only the most obvious version. Considering the massive changes Vivaldi made to the finale of RV365, I thought that it was well worth recording. Until now, this version of the finale has only been available as a download; the whole concerto with the alternative finale is included here.

We now had about 50% of an album so for our next sessions, the first to take place in the magnificent Cedars Hall at Wells Cathedral School in Somerset, I factored in time to record an extra work. This period coincided with my growing interest in the music of the little-known Bolognese composer Giuseppe Antonio Brescianello. We first encounter him in Venice working as a valet for the exiled Electress of Bavaria. Following the peace treaty that marked the end of the Wars of Spanish Succession, the Electress returned to Munich in 1715 with Brescianello, now described as a violinist. The following year, Brescianello left Munich to take the post of Director musices at the Württemberg Court in Stuttgart. In 1721 he was promoted to the long-vacant post of Rath und Oberkapellmeister, a position that he held (apart from a period between 1737 and 1744) until 1751 when he was pensioned off.

Most of Brescianello’s surviving output is instrumental and shows a predominantly Vivaldian style. Given his apparent familiarity with Vivaldi’s works (shown particularly in Brescianello’s Opus 1 publication) it would be surprising if he had not made Vivaldi’s acquaintance whilst in Venice. Brescianello fuses Vivaldi’s energetic allegros and languid slow movements with a harmonic outlook that is unreservedly German. One musician who was particularly impressed by Brescianello’s music was Johann Georg Pisendel, a pupil of Vivaldi and leader of the Dresden court orchestra. Several of Brescianello’s concertos and sonatas survive amongst the orchestra’s archives (now held at the Sächsische Landesbibliothek, Dresden) including the present concerto in G.

The final push to complete this project came in 2019 when, as part of our sessions for The Godfather, we recorded Vivaldi’s Concerto per Sua Maestà Cesarea e Cattolica (RV171), a work dedicated to the Holy Roman Emperor Charles VI. These sessions needed three trumpets and drums for works by Bach, Fasch and Telemann, so we drafted in a fourth trumpet to record a whole ballet suite by Matteis the Younger, this time from the final act of Caldara’s 1717 opera Cajo Marzio Coriolano. In line with contemporary practice, I bolstered the violins and basses with oboes and bassoon and reconstructed a viola part that is missing from the manuscript. We hope you agree that the rich brassy sonorities of this suite make for a suitably imperial finale to our album.