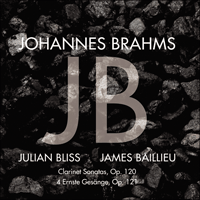 Two of the finest chamber musicians around today revel in the supreme craftsmanship of Brahms's sublime clarinet sonatas—works inspired by the great clarinettist Richard Mühlfeld whose Mozartian brilliance coaxed the composer out of retirement to write them.

In 1891 Brahms was already planning his retirement, even warning his publisher and friends not to expect any further compositions from him. However, when he heard Richard Mühlfeld, principal clarinet of the Meiningen Court Orchestra, in performances of the Mozart clarinet quintet and Weber’s first concerto, he was so stunned that his creative drive was newly stimulated. The outstanding artistry of Mühlfeld (1856-1907), a violinist who taught himself the clarinet in three years and who later became principal of the Bayreuth Festival Orchestra, was widely admired. Clara Schumann described Mühlfeld’s playing as: '… delicate, warm and unaffected … most perfect technique and command of the instrument.' In an article in The Clarinet of May-June 1989 Nicholas Shackleton and Keith Puddy describe the warm tone of Mühlfeld’s boxwood clarinets, preserved in Meiningen. Brahms’ various pet-names for Mühlfeld included 'Fräulein Klarinette', 'my dear nightingale' and 'my prima donna'. Another priceless anecdote comes from a viola-player who as a member of Joseph Joachim’s quartet had performed the Brahms quintet with Mühlfeld. He remembered his 'fiery technique, warm tone' and—surprisingly—'big vibrato'.

The four works Brahms composed for Mühlfeld—a trio, a quintet and two sonatas—proved to be his last chamber compositions, but subsequently he completed the groups of piano pieces Opus 116-119 (begun 1891-2) before writing a set of German folksongs, the Vier ernste Gesänge (Four serious songs), Opus 121, and 11 chorale preludes for organ, Opus 122. Thus, without Mühlfeld’s reawakening of Brahms’ creativity we would have been deprived of not only the clarinet works but also these other late compositions. In 1894, while preparing the final book of the 49 German folksongs for publication, Brahms again talked of ending his composing career. He wrote to Clara Schumann: 'Has it ever occurred to you that the last of the songs comes in my Opus 1? [the first piano sonata] … It really ought to mean something. It ought to represent the snake that bites its own tail, that is to say, to express symbolically that the tale is told, the circle closed—At 60 it is probably high time to stop.'

In the two sonatas of 1894 Brahms’ writing for clarinet is beautifully idiomatic, maximising the effectiveness of rapid arpeggios and the instrument’s ease in changing register. This latter characteristic facilitates octave displacement within a melody, thereby enhancing expressive tension—as in the opening theme of the F minor sonata, Opus 120 No 1. The tempo is Allegro appassionato, but here the passion burns steadily rather than impulsively. A comparison with the stormy opening movement of the first piano concerto (dating from the late 1850s) is revealing of the older Brahms’ relative restraint. For instance, the first entries of both piano and clarinet are marked only poco forte, and although there are several other passages of great emotional eloquence, espressivo and dolce are preferred instead of more assertive markings, and the dynamic only once rises above forte. Perhaps this discretion simply reflects the more sensitive, feminine qualities of ('Fräulein') Mühlfeld’s playing. Brahms—in common with every other major composer writing for a specific performer—undoubtedly would have been influenced by Mühlfeld’s style and technique. The opening movement, rich in melodic material, subtle and concentrated in development, concludes with a reflective coda marked sostenuto ed espressivo. In the manner of a serene reverie, the slow movement begins with a song-like melody, accompanied with spare simplicity. A slightly more active middle section does little to disturb the prevailing mood of resignation. Like a ländler in character, the genial Allegretto grazioso provides ideal contrast with the adjacent movements. Again the prevalence of markings such as dolce, molto dolce, dolcissimo, più dolce sempre and teneramente is striking. In the amiable rondo-finale Brahms achieves a balance between strongly marked rhythm and sunny lyricism. The assertiveness of the opening bars is soon mollified by the clarinet melody (grazioso, then leggiero). Of the contrasting episodes the first has a theme in crotchet triplets. The opening idea of three repeated notes subsequently returns to gently underpin a passage of development. This exuberant Vivace finale is just one of many examples from Brahms’ late compositions which expose the inadequacy of the 'autumnal' cliché. Above all there is the clarinet quintet, a work rich in fantasy, emotional intensity and fiery abandon. 'Autumnal' describes merely one element of these multi-faceted late pieces. Both clarinet sonatas have a wide expressive range embracing muscularity, passion, energy, humour and light-heartedness. In terms of compositional technique, Brahms’ motivic development shows typical resourcefulness. Indeed, his supreme craftsmanship—especially when he engaged with any intellectually challenging medium such as the sonata—may be taken for granted.

Brahms composed his Vier ernste Gesänge, Opus 121 in 1896, the year before his death aged 65. These were his first songs for ten years, if one disregards his settings of German folksongs assembled in 1894, though most of those were composed previously. For the Four serious songs Brahms turned to Luther’s Bible, as he had done in choosing texts for his German Requiem of 1865-68. He composed these sometimes painfully honest songs against the background of personal tragedy—the death of his dear Clara Schumann—as well as his own cancer of the liver. Again, his essential atheism/agnosticism led him to select passages of undogmatic character, three from Ecclesiastes and the other from 1 Corinthians. He avoided the title Four sacred songs in favour of 'serious'. The opening song, Denn es gehet dem Menschen (For that which befalleth the sons of man befalleth beasts) begins with a dignified and rather funereal Andante. For the middle section (Allegro) the time-signature changes from 4/4 to 3/4, with agitated triplet figuration and many repeated notes in the left hand, like a tolling bell. After a recall of the opening section, the Allegro returns briefly, its figuration receding into oscillations of adjacent notes, before the two emphatic final chords.

The second song, Ich wandte mich, und sahe an (I turned, and saw all the injustice that is done under the sun), is more deeply pessimistic in character. The pain evoked by the melisma in quavers (at the repeat of the word 'Tränen'—tears—in bar 21) is acute. Such extreme pathos is rarely encountered in Brahms’ music. The Alto Rhapsody comes to mind, though the quite different source of bitterness there was probably unrequited love. Although in the coda Brahms turns from G minor to G major, any sense of comfort is negligible.

O Tod, wie bitter bist du (O death, how bitter is the remembrance of thee) begins in E minor and 3/2 before moving into the relative warmth of E major and a more expansive 4/2. Brahms’ fondness for falling thirds, as at the beginning of his fourth symphony, is evident here, though the tone here is more declamatory. This is among Brahms’ profoundest and most powerful songs.

Wenn ich mit Menschen (Though I speak with the tongues of men and angels) marks a significant departure from the first three songs. The theme of St Paul’s sermon is charity, but the Lutheran Bible translates the original 'caritas' as 'liebe' ('love', not 'charity') and here Brahms clearly exults in love as the only quality which can surpass the power of death. The song begins with striding rhythm and impressive grandeur but St Paul’s text warns against spiritual emptiness ('I would be like sounding brass or a tinkling cymbal'). An adagio section in B major brings tender lyricism, with dolce triplets in the accompaniment. The contrast here makes the grandeur of the opening section seem relatively hollow. A return to the principal key of E flat, with the faster tempo of the opening, eventually leads to the triplet-accompanied, achingly beautiful and serene close (Sostenuto un poco). Apparently, in Wenn ich mit Menschen Brahms drew upon music from earlier songs which, it has been suggested, were linked with his feelings of unrequited love for Elisabeth von Herzogenberg, a pianist who had briefly studied with Brahms.

While compiling this disc, Julian Bliss and James Baillieu looked for something less predictable. Julian has arranged other songs including some by Rachmaninov, but for this Brahms CD the performers chose the Four serious songs because of their dark, death-related character, also because they date from just after the two clarinet sonatas. The only difference in the melodic line is the upward octave transposition. Among other instrumental arrangements of these songs is one recorded by the great cellist Daniil Shafran.

The second of the Opus 120 sonatas begins with a suave melody in a leisurely tempo ('amabile' = amiable or pleasant). In this generally restrained and lyrical movement the mellower, more resigned aspects of the composer’s late period prevail. In the development section Brahms generates some brief turbulence but the movement ends with a wistful coda marked tranquillo. Brahms’ duo-sonatas generally have taxing piano parts and that of the Allegro appassionato central movement, ardent and heroic, is particularly demanding. Indeed the equality of the two instruments throughout the clarinet sonatas is striking. The opening section eventually relaxes, giving way to a serene middle section (marked Sostenuto, ma dolce e ben cantando) with a broad, spacious melody. The finale, a set of variations, is based on a theme of innocent character, almost like a folk-song, but of unusual 14-bar length. Of the five variations the first three are lyrical and elegant—Variation 2 exploiting the chalumeau register of the clarinet—but they also become increasingly florid. Variation 3 (marked grazioso) has twenty-four notes to the bar, neatly dovetailed between clarinet and piano. Variation 4 returns to quiet and stillness, before a change of tempo for Variation 5—an incisive Allegro in 2/4 including some robust cross-rhythms. Brahms’ two sonatas remain the outstanding contributions to the clarinet/piano repertoire, while viola-players are equally grateful for these major works. Brahms judiciously adapted both clarinet and piano parts for the alternative viola versions.

The two Brahms clarinet sonatas are arguably some of the greatest pieces of chamber music for the instrument and they are truly my favourite works in the whole clarinet repertoire. I have studied, played and listened to these pieces over the last 20 years, and I’m aware that my approach and interpretation has evolved in that time—recording these great masterworks has always been a goal of mine.

The Brahms sonatas are by no means clarinet pieces with piano accompaniment; they are duos with equal standing for both instruments. James and I wanted to try a new recorded coupling for Brahms’ clarinet sonatas, and so we started playing through his vocal works. The Vier ernste Gesänge stood out to us because of their beauty and importance in Brahms’ output. This set of songs were composed immediately after the sonatas and seemed to be a perfect fit, musically, alongside the clarinet sonatas. The first sonata is quite dark at times, and the second is a more positive, happier piece—even the key signatures, F minor and E flat major indicate this. By way of contrast, the first three songs of the Vier ernste Gesänge have a dark subject matter and are in minor keys. The final song in E flat major is gentle and consoling.

It was a pleasure to record this album with James and especially so with ace producer, Nick Parker, and sound engineer, Mike Hatch. To have a partnership like this one is a very special thing. There is never a dull moment when we work together and I appreciate all of their hard work and dedication to realise this album.