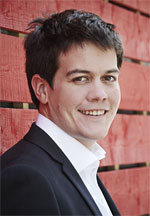 Described by The Daily Telegraph as ‘in a class of his own’ James Baillieu has been the prize-winner of the Wigmore Hall Song Competition, Das Lied International Song Competition, Kathleen Ferrier and Richard Tauber Competitions. He was selected for representation by Young Classical Artists Trust (YCAT) in 2010 and in 2012 received a Borletti-Buitoni Trust Fellowship and a Geoffrey Parsons Memorial Trust Award. In 2016 he was shortlisted for the Royal Philharmonic Society Outstanding Young Artist Award.

Born in South Africa, James studied at the University of Cape Town and the Royal Academy of Music in London with Michael Dussek, Malcolm Martineau and Kathryn Stott. In 2007 he graduated with a Dip.RAM and received the Christian Carpenter Award in recognition of his outstanding achievements. He was appointed a Hodgson Junior Fellow in 2007, a Professor of Piano Accompaniment in 2011, and awarded an ARAM in 2012. He is an International Tutor in Piano Accompaniment at the Royal Northern College of Music.

An innovative programmer, James has already curated a number of projects, including series for the Brighton Festival, Wigmore Hall, BBC Radio 3, Bath International Festival and Perth Concert Hall. In the 2015/16 season James presented his own 11-concert series at the Wigmore Hall 'Introducing James Baillieu' with Adam Walker, Jonathan McGovern, Ailish Tynan, Tara Erraught, Henk Neven, Iestyn Davies, Allan Clayton and Mark Padmore amongst others. This series was shortlisted for the Royal Philharmonic Society’s Chamber Music and Song Award for an outstanding contribution to the performance of chamber music and song in the UK during 2016. He took part in a European tour with Benjamin Appl as part of the ECHO Rising Stars series and recently made his debut at the Edinburgh International Festival.