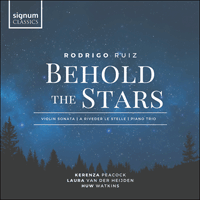 The music of Mexican-born Rodrigo Ruiz is unashamedly Brahmsian. The three works recorded here were written between 2017 and 2019 and all feature violinist Kerenza Peacock as a guiding force.

Interview with Rodrigo Ruiz
Rodrigo Ruiz waves to me on the Zoom screen from his former home in Mexico. There he and his wife found themselves in lockdown when the pandemic struck earlier this year. Normally their base is Rome: ‘We were visiting family and fortunately have been able to stay with them,’ Rodrigo says – and it is from this distance that he must watch the release of this recording, the second-ever album devoted to his somewhat unusual music. The unsuspecting listener might be surprised to find a 32-year-old composer writing in 2020 along tonal musical principles that were second nature some two centuries ago.

The programme in this album clearly shows Rodrigo´s roots in the traditions of Beethoven and Brahms, but with individual twists that clearly indicate we are in fact on new territory. ‘It’s the music that comes naturally to me; I find that tonal music speaks to me very directly. After all, even the most inexperienced listener can perfectly enjoy a Mozart sonata with no need for sophisticated analyses. That’s important to me because I think music does have a very special power, part of which is to be able to transform the world around us and our own inner worlds.’

Francesco Telli remains his sole composition mentor – other than Beethoven. ‘To make up for lack of a teacher in my childhood, I always said if you want to learn, go to the best, and to me Beethoven is the best!’ Rodrigo´s close study of Beethoven has informed his own musical choices, frequently in ways that present an intriguing reinterpretation of these methods. ‘We’re constantly told that Beethoven broke the rules,’ he says, ‘but I think that often those rules have been suggested with hindsight. I see it more as a matter of one big principle: cause and effect. Everything he writes depends on that.

‘I also find the concept of dissonance to be rather limiting and misleading. It is more helpful to think of expansion and contraction – the whole universe expands and contracts. Our own process of breathing, our very life cycle, are small iterations of this universal principle. When a note that did not exist in the home key comes into play, it is better understood as an expansion of that micro-universe, and not as a dissonance that irrupts into it.’

These concepts are at the core of what Rodrigo aims for in his own music, which emerges diatonic rather than chromatic, yet often giving the impression that it is unfurling unexpected growth from a modest starting point.

The three works in this recording were written in 2017-19 and all feature the violinist Kerenza Peacock as a guiding force. The Violin Sonata sprang from her specific request, if with a twist: ‘Kerenza asked me to write a piece for her,’ says Rodrigo, ‘but actually she specified that it should not be a sonata. She really wanted a short, piece but fortunately she is a great friend who lets me get away with these things.’ It was Kerenza, too, who according to Rodrigo asked for the work’s most unusual feature: the scordatura in which the instrument’s G string is tuned down a tone lower than usual, to a bottom F, lending the work’s soundworld an extra depth and darkness.

The sonata is a substantial piece in four movements. After a slow introduction and lyrical first movement with pastoral atmosphere, there comes a recitativo that Rodrigo decided would offer a necessary contrast at this point. The busy, Schumannesque third movement is deceptive, tricking the ear into expecting it to be a finale. The true conclusion, however, is the slow movement proper, ending the work on a note of beauty and transformation. ‘The central idea,’ says Rodrigo, 'came from the image of a starry night by a lake transforming into dawn. But of course that image isn't necessary. Everyone should simply enjoy the music in their own way.' It is an image, nonetheless, that attracts him strongly; his first CD was entitled An everlasting dawn, in which he writes: 'Night gives way to day, sadness to joy, defeat to hope and death to rebirth.'

To make up for not having produced initially the short work for which Kerenza had asked, Rodrigo elected to write A riveder le stelle. This, unusually for a violin and piano work, is accompanied by poetic quotations: the piece was inspired by Canto XXXIV of Dante's Inferno: 'Literature is another great passion of mine', says Rodrigo, and I often try to unite it with music.' Indeed, he is currently studying for a doctorate on the subject of mythology and hints that he has potential operas in the pipeline for which he is writing his own libretti.

The main these of this piece is conceived as a setting of the words 'Vexilla regis prodeunt inferno', announcing the inexorable approach of Lucifer's standards through the mists. 'I tried to recreate the idea of that misty expanse, suggested in Dante's poem', Rodrigo says. 'Then I break up the themes: he's hearing it at first at a distance and I imagined what it would be like to hear it in a great cavern from far away, where you can't see very well, you hear bits of it, there's an echo …' The result is a rapt, bleak, inwards piece that exploits a range of expressive violinistic effects, including natural harmonics and col legno bowing.

Last, by no means least, the Piano Trio calls to mind the rich, robust harmonies of Brahms. It is, says Rodrigo, an entirely abstract work, rather than possessing an underlying programme, and like many of his pieces it started life as a piano improvisation. Central to its organic language are the motifs of a falling third (hence, perhaps, the 'Brahmsiness' of its sound) and key relationships based on the interval of a second. Nevertheless, it was not Brahms but, once more, Beethoven that provided the chief model, notably Rodrigo’s study of the modulation schemes in the Piano Sonata, Op 53, the ‘Waldstein’, in which ambiguous twists and turns of context affect the way that harmonic relationships are perceived and in which, as ever, nothing happens by accident. As in the Violin Sonata, the opening movement is spacious and songful; there follows a vigorous scherzo in the minor, which also has a Brahmsian flavour with vivid syncopations and light-fingered piano arpeggios.

The final movement consists of a theme and character variations on a lavish scale. Rodrigo remarks that the variation form is not a natural favourite for him; he still seems slightly surprised at his own inclination towards using it here. ‘I came up with a theme in A major that was thematically connected to the first movement,’ he says, ‘and while im provising on it I was particularly pleased with an idea that became the variation in which the piano is the most prominent instrument, appearing near the end after the Adagio. In order to accommodate this, I chose variation form for the movement.’ Nevertheless, the variations are not numbered and the form is relatively relaxed and flexible: ‘Some variations are more defined than others,’ Rodrigo says, laughing. This typically invigorating update of an ever-popular classical format brings the trio to a rousing conclusion.