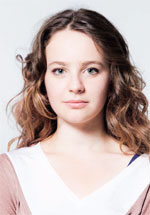 Winner of the 2012 BBC Young Musician of the Year Competition, Laura van der Heijden has been making a name for herself as a very special emerging talent, captivating audiences and critics alike with her imaginative interpretations and probing musicianship.

2018 marked the global release of Laura’s critically acclaimed debut album '1948', featuring Russian music for cello and piano with pianist Petr Limonov. It won the 2018 Edison Klassiek Award, broadcast live on national TV in the Netherlands. The CD has been hailed as a 'dazzling, imaginative and impressive' debut recording.

Laura was born in England to Dutch-Swiss parents and gave her first public performance at the age of nine. Since 2008 she has been a student of the renowned British-Russian cellist Leonid Gorokhov, and participates regularly in masterclasses by David Geringas, Ralph Kirshbaum and Miklós Perényi. She is currently in her final year studying for her Bachelor’s Degree in Music at St John’s College, Cambridge, while also maintaining a busy concert diary.

Other highlights include a recital with Fazil Say at Zürich Tonhalle, a performance of Schumann’s Cello Concerto at Kings Place in London, a UK tour with IMS Prussia Cove, as well as her debut with the Argovia Philharmonic, and at Wigmore Hall in a BBC lunchtime recital.

Laura plays a late seventeenth-century cello by Francesco Rugeri of Cremona, on generous loan from a private collection. She is an Ambassador for both the Prince’s Foundation for Children & the Arts and Brighton Youth Orchestra.