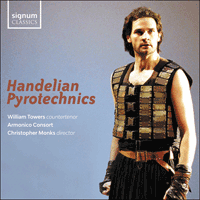 The Armonico Consort returns to Signum with a collection of Handel arias, performed by leading countertenor William Towers. A noted soloist in both opera and oratorio, the programme is taken from roles which Towers has sung across his career in various productions across the globe.

The opportunity to record a disc of Handel’s operatic arias came to me very early on in my life. I turned it down. As far as self-promotion and general career-advancement were concerned, I could see how useful such a recording might be. Artistically speaking I could not feel comfortable with it. At this stage I had performed only a couple of Handel’s operatic roles on stage and I had found them a stern examination of technique, stamina and emotional reserves. I resolved therefore to aim to revisit this concept only when I had performed a significant number of his operas, and to choose repertoire for a recording that I knew and loved; that I had fully lived with. All the recorded material here therefore is from roles that I have sung, in some cases many times over, in various productions.

My original title for this recording was ‘Handel for Life’. I have had an association with his music for as long as I can remember. My father passed on a love of music to all his children, a love that he had acquired in the darkness of a Sheffield air-raid shelter; his earliest memories are of his mother’s voice, singing to soothe him as the bombs fell. As a family we genuinely would gather around the piano in the evenings and sing together, and in these gatherings Handel was a recurrent presence. The Messiah was foremost of course, but the very first operatic aria I knew and learnt was ‘Art thou troubled? Music will calm thee’: a not-very-faithful English rendering of ‘Dove sei’ from Handel’s Rodelinda. My choices for this recording have thus been guided by what is significant to me, as well as their general excellence. ‘Se possono tanto’ may seem obscure to some, but Poro was my first ever Handel role, and I really need no excuse to include what is, along with ‘Qual nave smaritta’ and ‘Dove sei’, a shining illustration of how frequently and skilfully Handel uses the radiance of E major for a character’s defining aria. Beethoven said of Handel: ‘Go to him to learn how to achieve great effects by such simple means’, and so I have gone to ‘Tacerò, purchè fedele’; has anyone ever written so eloquently about being silent? I always begin the da capo relishing the irony of this repetition.

I once overheard a distinguished conductor being interviewed about how he ‘lived for his art’. He refuted the concept: ‘Bullsh*t’, said he, ‘Art lives for us’. It is this life-affirming, live-giving aspect of Handel that I’m aiming to celebrate. So frequently his operas reveal their most devastatingly beautiful and uplifting music when life is at its darkest. Here the arias shine brightest, here we find Radamisto’s ‘Ombra cara’ and the boundlessly optimistic ‘Dopo l’orrore’, looking out beyond the darkest clouds to the faint glimmer of a dawning hope. This is the uncrushable, indomitable spirit that lies in all of us, whatever air-raid shelter of life we might find ourselves in. We just need to take the time to listen.