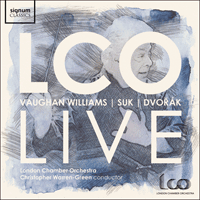 Opulent Czech string serenades from Antonín Dvořák and Josef Suk (the latter in many respects a tribute to the earlier work by his father-in-law) alongside Ralph Vaughan Williams's famous Tudor-inspired fantasia.

Vaughan Williams Fantasia on a theme by Thomas Tallis
Ralph Vaughan Williams’ works still represent to many the quintessence of 'Englishness' in music. Born in 1872, he rose to become one of Britain’s best-loved composers and was appointed to the Order of Merit. Initially, though, he had to defy his family to follow his vocation. His distinguished background incorporated Charles Darwin as great-uncle, but made little provision for artistic pursuits.

Vaughan Williams was nearly 38 when he composed his first outright masterpiece, the Fantasia on a Theme by Thomas Tallis. Besides pursuing studies with Hubert Parry, Charles Stanford and Maurice Ravel, he had spent a number of years collecting folksongs and editing (indeed, composing much of) the Anglican Church’s hymnal. The latter led him to explore with fascination 16th-century British works by composers including Orlando Gibbons, William Byrd and Tallis.

In the Fantasia he reimagined and transformed musical traditions of that era, notably the madrigal—a part- song in which many voices interweave—and the Fantasy, an instrumental form that develops related themes in different sections. It was written for the Three Choirs Festival in 1910 and revised twice, in 1913 and 1919.

Vaughan Williams employs three distinct groups of string players: the full ensemble, a smaller distant orchestra and a quartet. Their contrasted sonorities were cleverly designed to suit the spatial qualities of Gloucester Cathedral. But the work’s complex emotional resonances have carried it much further, with a timeless capacity to inspire and move its listeners.

Suk Serenade for strings
In 1892 Antonín Dvořák suggested to a melancholy yet talented student at the Prague Conservatory that he could perhaps try writing something a little bit more cheerful for a change. This was his star pupil, Josef Suk, who responded by creating a Serenade for strings, modelled to some extent on Dvořák’s own (which had been written when Suk was barely a toddler). The work launched his career, not least because Johannes Brahms championed it, just as years earlier he had helped Dvořák as well.

Suk seemed born for success; it’s not clear why his artistic nature was quite so melancholy. He came from a highly musical family. His father was also named Josef Suk and the name continued down the generations (the late great violinist Josef Suk was the composer’s grandson). Suk the composer, born in Křečovice, Bohemia, in 1874, enjoyed a strong grounding in both violin and organ as well as composing. He formed the Czech String Quartet with three fellow students at the Prague Conservatory and remained its second violinist for much of his life. Later he taught at Conservatory—his pupils included Bohuslav Martinů and Rudolf Firkušný—and ultimately became the institution’s head twice, 1924-26 and 1933-35.

Tragedy had struck him in earnest, however, when his wife Otylka, who was Dvořák’s daughter, died in 1905, the year after her father. Suk translated the effects of this double devastation into his ‘Asrael’ Symphony, arguably his greatest work. Yet, true to his dark side, he had started work on it before this appalling series of events took place.

Even the Serenade is not wholly sunny, however much the youthful Suk tried to follow his mentor’s advice. The shadows seep up through its extended, inspired, songlike melodies—a vivid characteristic of Czech folk music, often poised on the fine line between laughter and tears. Unlike Dvořák’s Serenade, the work only has four movements, but its similarities to its predecessor are clear at once in the relaxed yet wistful nature of the first movement. This is followed by a lively yet gentle dance movement full of strongly Czech rhythms, an achingly lyrical adagio and a finale that is probably as optimistic as the composer ever let himself become.

Dvořák Serenade for strings
The composer who brought Czech musical style to fruition, Antonín Dvořák was born near Prague, in Nelahozeves. He evaded entering the family business; his father was a butcher, though fortuitously an excellent folk musician as well. At home in childhood, Dvořák absorbed much of the musical language that influenced his life and fortunes thereafter.

For 11 years the young Dvořák, an excellent all-round musician, played the viola in Prague’s Bohemian Provisional Theater Orchestra under the direction of Smetana, another of his main influences; he supplemented his income by teaching piano. In the meantime he fell in love with one of his pupils, Josefina Čermáková—but it was her sister, Anna, who ultimately became his wife and bore him nine children.

Sending 15 substantial compositions as application for an Austrian State Stipendium for impecunious young artists in 1875, he was described as 'Anton DWORAK of Prague, 33 years old, music teacher, completely without means'. The young family was underway by this time, too.

The judges, fortunately, were the conductor Johann Herbeck, the critic Eduard Hanslick, and Johannes Brahms, who awarded him 400 gulden. Brahms soon befriended him and introduced him to the publisher Simrock, who commissioned his first set of Slavonic Dances. Brahms’s lyrical style and rich yet measured textures found their natural heir in Dvořák; he also much admired Tchaikovsky, composer of one of the most famous Serenades for strings of them all. Having won his stipend, Dvořák redoubled his efforts and in that same year, 1875, he finished three chamber pieces, a song cycle, his fifth symphony, and the Serenade for strings.

The latter’s five movements are shot through with Dvořák’s typical proximity of happiness and sorrow, embodied in long-spun melodies, malleable harmonies, lilting folkdance rhythms and a certain languid beauty of atmosphere. Instead of opening with a lively allegro, the first movement is gently expansive and tranquil. The Tempo di Valse, with its hemiola rhythms, is closer to a wistful Czech folk-dance than any high-society ballroom numbers; the Scherzo is light and bustling before the Larghetto delves into a heartfelt melody filled with longing. The inventive finale, opening in the minor, fizzes along in high spirits, incorporating an irresistible Slavonic dance-like second theme and also bringing in reminiscences of the Larghetto and, just before the final coda, the whole work’s opening melody.

Of the 1876 Prague premiere, one critic wrote: 'Antonín Dvořák gave us a pleasant surprise with his serenade for string orchestra, showing decisive progress in the evolution of his artistic development towards greater stability and independence'. The Vienna Philharmonic had turned the work down. The loss was theirs.