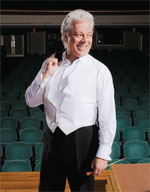 British conductor Christopher Warren-Green is Music Director of both the London Chamber Orchestra and Charlotte Symphony in North Carolina.

In addition to his international commitments, he has been invited to conduct at the weddings of the Duke and Duchess of Cambridge at Westminster Abbey in 2011 and the Duke and Duchess of Sussex at St George’s Chapel, Windsor, in 2018. He conducted the Philharmonia Orchestra for HM The Queen’s 90th birthday concert at Theatre Royal, Drury Lane, as well as HRH The Prince of Wales’ 60th birthday concert in Buckingham Palace.

A violinist by training, Warren-Green began his career at the age of 19 as concertmaster of the BBC National Orchestra of Wales, followed by the Philharmonia Orchestra and the Academy of St Martin in the Fields. He is a Fellow of the Royal Academy of Music, having been a Professor there for eight years, and has appeared numerous times on television and radio. He has recorded extensively for Sony, Philips, Virgin EMI, Chandos, Decca and Deutsche Grammophon, and records with the London Chamber Orchestra for Signum Classics.