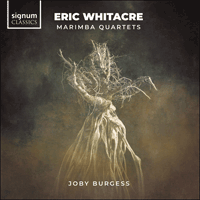 This truly unique recording for Signum sees Joby Burgess arrange some of Eric Whitacre’s ever-popular choral works for Marimba quartet. The warm, earthy sound of the marimbas makes for a spectacular record.

I was delighted when Eric got in touch to ask if I might arrange some of his choral music for marimba. I first met and worked with Eric in 2012, when I was invited to organise the percussion elements of his debut BBC Proms Concert at London’s Royal Albert Hall.

His music contains many of the things I love in choral music; lush tonal harmonies, strong audience engagement and a firm spiritual connection. We also share a similar taste in 1980s pop, although I would be the 4th member of A-ha, not the 5th member of Depeche Mode!

I began with three pieces from the album Light and Gold, which sit perfectly for marimba quartet, positioning four players at two marimbas.

I transcribed Sleep replacing the voices with the warm, earthy tones of the marimbas to make an evocative marimba chorale. In contrast, A boy and a girl contains some eighth note passages to convey momentum, whilst Lux aurumque employs up to twelve mallets across the instruments to keep the original division of parts.

For October I added two vibraphones (played without motor) to the marimbas, to utilize the wider sound pallet of the mallet quartet. Working from the choral version Alleluia this music chimes and sparkles, a humble meditation on the glory of autumn.