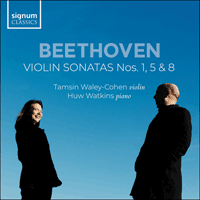 Beethoven’s twelve violin sonatas consistently push the bounds of writing for two quickly developing instruments on equal terms—possibilities Beethoven was ideally placed to understand as both violinist and pianist. The three sonatas on this recording are waypoints on this journey.

'I cannot write anything non-obbligato, for I came into this world with an obbligato soul.'

When Beethoven sent his Op 20 Septet to the publisher Hofmeister of Leipzig in December 1800, he clearly felt the need to explain himself. He really shouldn’t have. The principle that the separate parts in a chamber work were individual and necessary (obbligato) as opposed to optional (ad libitum) was widely established by the time of Mozart’s final violin sonatas in the late 1780s. With the spread of the pianoforte, the idea that a keyboard sonata would require 'accompaniment' from a string instrument was increasingly redundant.

So convention alone dictated that Beethoven’s Op 12 of 1798—his first published work for violin and keyboard—should be described on its cover as 'Three Sonatas for keyboard with a violin'. But old-fashioned amateurs who tried to play these works without violin were soon confused. The critic of the Allgemeine musikalische Zeitung described them as 'pianoforte pieces' before confessing that he’d played them 'without any pleasure. Learned, learned and always learned—and nothing natural, no song'. He’d failed to realise that the violin part was anything but an optional extra.

Beethoven would never have made that error. He had begun his professional career as a viola player in Bonn, and although the piano dominated his performing career in Vienna, he took violin lessons with Wenzel Krumpholz, and continued to play in private, though as his hearing deteriorated so too did his playing. 'We occasionally played his sonatas for violin together', recalled his piano student Ferdinand Ries. 'But it was really awful—his ear did not tell him when he had attacked a passage with the wrong fingering.' Nonetheless, as late as 1825, Beethoven was still able to pick up a violin and illustrate details in the Op 132 quartet to members of Schuppanzigh’s quartet—though he played a quarter-tone flat.

But his string player’s instincts never left him, and Beethoven’s twelve violin sonatas add up to a comprehensive exploration of the possibilities and potential of writing for two quickly-developing instruments on equal terms—possibilities that he was ideally placed to understand. The three sonatas on this recording are waypoints on a journey, crafted by a composer who was both violinist and pianist, and who never ceased exploring the practical possibilities of the instruments for which he wrote.

Violin Sonata No 1 in D major Op 12 No 1
Where Mozart led, Ludwig van Beethoven was never ashamed to follow. Attending a Viennese performance of Mozart’s C minor Piano Concerto, K491, in 1799 with the pianist Johann Cramer, he reportedly turned to his companion and exclaimed: 'Cramer! Cramer! We shall never be able to do anything like that.' Beethoven could have added that actually, he didn’t need to. The previous year, in the spring of 1798, he’d published three violin sonatas Op 12, which prove that he’d made a close study of Mozart’s. And at the head of the title page is the traditional heading 'Sonata for Pianoforte and Violin'.

Like Mozart, Beethoven still observes the 18th-century convention that the violin is accompanying the piano. What Mozart would have thought about Beethoven’s decision to dedicate his three sonatas to the still-influential Antonio Salieri, of course, is anyone’s guess—though given that Mozart actually admired Salieri (Amadeus is pure fiction), he’d probably have approved. Meanwhile, far from being constrained by Mozart’s model, Beethoven had given it Romantic wings. The idea of solo and accompaniment never sat entirely comfortably with a revolutionary age: Beethoven opens his sonata-form Allegro con brio ('with brilliance') with a bravura unison flourish before letting both instruments follow their nature: the violin to sing expressively, the piano supplying whirling, headlong semiquavers—and both then exchanging places.

The Andante con moto takes a winsome theme through four variations that let both instruments explore gloriously expressive and inward depths: this is Beethoven the dark-eyed, tousle-haired young poet whose solo appearances were such a hot ticket amongst the young ladies of Vienna’s more fashionable salons. And the jig-like finale plays subversive rhythmic games worthy (though Beethoven would never have conceded it) of Haydn himself. This, no doubt, was a contributing factor to the shocked review that these sonatas received from that critic in the Allgemeine musikalische Zeitung: 'A striving for strange modulations … a heaping up of difficulties.'

Meanwhile Beethoven reported gleefully that Op 12 had gone into eight editions—and that publishers in Paris, London and four German cities were vying to print them. The musical public and the critics seem—not for the last time—to have disagreed.

Violin Sonata No 5 in F major 'Spring' Op 24
Musical evenings at the house of Count Moritz von Fries in Vienna could be lively affairs. At one such occasion in May 1800, the visiting piano virtuoso Daniel Steibelt sat yawning through Beethoven’s new Op 11 clarinet trio, before a week later ostentatiously improvising a set of flashy variations on the theme Beethoven had used for his finale. Beethoven, furious, grabbed the cello part of Steibelt’s own quintet, barged his way to the keyboard and, placing Steibelt’s music upside down on the desk, launched into his own thunderous improvisation. Steibelt stormed out.

Beethoven, however, felt no enmity towards Count von Fries—a skilled amateur violinist who’d been one of the subscribers to his Op 1 trios five years earlier. In September 1801, the Wiener Zeitung advertised 'Deux Sonates pour le Pianoforte avec un Violon', Op 23, dedicated to von Fries—although they would actually be printed as Op 23 and Op 24. And the second of the pair feels, even today, like a warm breeze blowing through a window thrown wide. The nickname 'Frühlings-Sonate' wasn’t Beethoven’s (the only note he added to the manuscript was a comment in red pencil that 'The copyist who put triplets and septuplets here is an ass'). But F major had a long history as the key of rural greenery, even before Beethoven’s own Pastoral symphony of 1808.

In any case, the blossoming, birdsong-like freshness of Beethoven’s opening melody—now the violin’s very own, with the piano supplying a gentle 'scene by the brook' accompaniment—suggests its own comparisons. It’s a suitably expansive opening to Beethoven’s first violin sonata in four movements. The motifs of the A minor sonata expanded and found fulfilment as the sonata continued; here, the opening melody is already the point to which each of the sonata’s movements will return (in spirit, if not the precise notes). And a melody of such breadth simply demands four movements over which to work its charms.

So the serene theme that launches the three leisurely variations of the Adagio molto espressivo also begins with a sustained note and a graceful turn, over a gently rippling accompaniment. The tiny scherzo plays a cheerful game of catch-up between piano and violin, with a whirling trio section so concise that it’s barely more than an ornament in its own right: the smile on Beethoven’s face is plain to read. And the finale sweeps into its amiable flow episodes of dancing glee, rustic pizzicati, and just enough of a suggestion of stormclouds to establish that this is all for real—with, just before the very end, the briefest and most unaffected possible prayer of thanksgiving. 'The original fiery and bold spirit of this composer … is now becoming increasingly serene', wrote an approving (if over-optimistic) Leipzig critic.

Violin Sonata No 8 in G major Op 30 No 3
In April 1802, on doctor’s orders, Beethoven moved to the village of Heiligenstadt just outside Vienna, where it was hoped that the rural peace would allow his hearing to recover. It very obviously didn’t work: he poured out his despair in an anguished letter to his brothers, known today as the Heiligenstadt Testament:

What a humiliation for me when someone standing next to me heard a flute in the distance and I heard nothing, or someone heard a shepherd singing and again I heard nothing. Such incidents drove me to despair; much more of that and I would have ended my life—it was only my art that held me back.

And then, within a matter of weeks, he’d written his three violin sonatas Op 30, concluding with this one: a work described by the great violinist Josep Szigeti as a work of 'conflictless perfection'. What could be more effortlessly joyful than the exuberant, whirling flourish that opens the first Allegro assai, or more sunny than the bustling sonata-form movement that follows? Or more tenderly nostalgic than the long, searching melody that opens the second movement, the violin spinning its emotions out over the stately tread of the piano’s Tempo di menuetto (itself a throwback to a gentler age)?

As for the finale, it’s as if (once again) Beethoven is channelling the rustic high-spirits of his former master Haydn, that most generous of all composers. There’s roughness, and some deliciously spicy discords—but is it possible that a man who had weeks earlier been contemplating suicide could now simply stick his tongue out and laugh? It certainly sounds that way. 'I would have ended my life', Beethoven had written in the Testament; 'it was only my art that held me back.' Few works remind us more bracingly that when Beethoven said that he lived for music, he meant it.

A few years ago, during a radio interview, Huw announced that he would like us to record a Beethoven cycle together, much to my delight, and a little to my surprise. Beethoven has been at the heart of our recital programmes for the past dozen years or so, and in many ways, feels like ‘home’. We want to share our love and our feeling of closeness to Beethoven’s music with as many people as we can through our recordings, and we hope its powerful, life-affirming spirit, its warmth, confidence, and noble beauty will bring as much joy to our listeners as it brings to us.