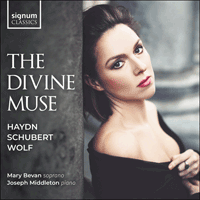 After the success of their debut disc, ‘Voyages’, Mary Bevan and Joseph Middleton present their second recital disc exploring Lieder in German and Italian by Schubert, Haydn and Wolf. The programme is woven around songs inspired by the ‘muses’ of the day, both mythological and divine.

‘Isn't that a beautiful thing? [Wolf's Schlafendes Jesuskind] … touchingly achieved by soprano Mary Bevan and pianist Joseph Middleton, and a perfect conclusion to the trajectory of this recital based around song texts rooted in divinity and mythology’ (BBC Record Review)

Vedi quanto adoro comes from Act II, scene 4 of Metastasio’s first full-length opera libretto Didone abbandonata. Schubert, having composed this aria, in which Dido pleads with Aeneas not to abandon her, asked Salieri for his opinion on his composition. Might he have had his eyes on an appointment at the opera house? Whatever—it is a most impressive operatic scena and an ideal vehicle for a soprano with a powerful top C.

Of Schubert’s eleven solo settings of Metastasio, Son fra l’onde is one of the finest. Composed at the age of sixteen, the music betrays Schubert’s newly awakened interest in the world of opera. The words, from Metastasio’s Gli orti Esperidi, describe Venus’s uncertainty as she lurches between hope and despair, and Schubert in this aria of turbulent right-hand semiquavers expresses her commotion to perfection.

Schiller’s Die Götter Griechenlands (1787), a poem of 25 eight-line stanzas, laments the lost beauty of the Hellenic world and, in its original version, contained sharp criticism of Christian theology and iconography. Schubert’s song uses Schiller’s second version and sets only one of the 16 verses—the one which expresses most powerfully the sense of loss. The song is justly famous for the alternations between minor and major modes, A minor for the wistfully repeated ‘Schöne Welt, wo bist du?’ and A major for the (illusory) vision of an ideal Greek world.

Goethe’s Ganymed begins by describing a common enough human experience, that of lying stretched out on a hill in springtime. The poet then goes on to express the oneness of all things, man, nature and creator, and addresses Spring as a lover. Ganymede in myth was raised up to Olympus by Zeus, who had fallen in love with the boy, wished him to be his cup-bearer and abducted him in the guise of an eagle, as depicted in Rembrandt’s fine painting in Dresden. In typical Sturm und Drang fashion, Goethe changes myth, although Zeus appears in a variety of guises throughout the poem (morning breeze, nightingale), Goethe has Ganymede borne aloft by the intensity of the boy’s feelings—a process that is given almost tangible form by Schubert’s key-design, from A flat to F major via G flat and E major, also by the melismatic setting of the final phrase, and the soaring postlude of minims and semibreves, marked pp and diminuendo. In a letter to Emil Kauffmann of 22 December 1890, Wolf expressed the view that Schubert’s settings of ‘Ganymed’ and ‘Prometheus’ had not been entirely successful, and that ‘it was left to a post-Wagner era to compose these magnificent poems’. While Schubert’s setting of Ganymed speaks more of contented love than yearning, Wolf’s song, especially in the rise and fall of the piano’s quavers above the stave, convey an intense yearning that is absent from Schubert’s more melodious setting.

Zum neuen Jahr is subtitled ‘Kirchengesang’ (‘Hymn’)—a song in diatonic mode that uses a succession of parallel thirds in contrary motion between the two hands to express the harmony of the text. Note how he handles the climax in verse two, by giving such important words as ‘Lenke’, ‘Herr’, ‘Anfang’, ‘Ende’ and, above all, ‘alles’, ever longer note values, until the music, significantly marked ‘überströmend’, overflows with joy and praise.

Gebet, like the equally famous Verborgenheit, is a fervent plea to avoid violent emotional upheavals (Mörike had been seduced by the young Maria Meyer, a relationship that produced the Peregrina poems and others in which he strives to avoid amorous entanglements), which Wolf sets to a sort of four-square hymn tune, until at ‘doch in der Mitten/Liegt holdes Bescheiden’, the piano soars ecstatically before descending gently into the final heart-easing cadence.

During his childhood and adolescence, Mörike used to explore the deep woods with two friends, where they created their own kingdoms, peopled by elves and nixies. Orplid was an island where they could escape the pressures of the all too real world—but even here the dionysian asserts itself, primeval waters rise, rejuvenated, around the island’s hips. Wolf told Emil Kauffmann that in Gesang Weylas he imagined Weyla sitting on a moonlit reef, accompanying herself on the harp. The orchestral version increases the incantatory mood by adding clarinet and horn.

It was during his first London season in 1791 that Haydn performed Arianna a Naxos with the famous castrato Gaetano Pacchierotti at a Ladies’ Concert held at the home of a Mrs Blair in Portland Place, then subsequently at the Pantheon Theatre. The Morning Chronicle in its editions of 23 and 26 February gave glowing reviews. The work had been written two years previously, and deals with a theme that has attracted composers from Monteverdi to Richard Strauss and Alexander Goehr. Ariadne, daughter of King Minos, having helped Theseus escape from Crete, has gone with him to the Island of Naxos. The opening recitative in E flat major, marked largo and sostenuto, describes Ariadne calling Theseus. There is no reply, and as her cries become more urgent, she sings the aria ‘Dove sei, mio bel tesor!’—a most expressive largo in B flat major. The aria is followed by a recitative in C and F major, Ariadne climbs to the top of a nearby hill and sees to her horror that Theseus’ ship has gone. Realizing that she has been abandoned, she laments her fate in the final F minor aria.

Geistliches Lied comes from Haydn’s second set of XII Lieder für das Clavier published in 1784. The only religious text in the collection, it is characterized by sforzato outbursts of grief that disturb the gradual unfolding of the Adagio cantabile melody.

Gott im Frühlinge, composed to a poem by Johann Peter Uz, is a paean of praise to God. The song is a delight and though marked ‘mäßig’ pulses along merrily, the first 47 bars of the accompaniment have an identical figure comprising three pairs of four semiquavers, of which the final two are played staccato. This rapturous mood is intensified in bar 48, where the staccatos vanish and the pianist is instructed to use the sustaining pedal, as though to underline triumphantly the poet’s final lines, ‘I shall praise the Lord/ Who made me what I am!’

When Novalis’s beloved, Sophie von Kühn, died on the eve of her fifteenth birthday, his whole world collapsed. Novalis mourned not only by visiting Sophie’s grave and laying out her clothes at home to feel her nearness to him, but also by creating the wonderful Hymnen an die Nacht and Geistliche Lieder, which helped him solve his emotional crisis. Marie is addressed to the Virgin Mary but also, obliquely, to Sophie, whose death became for him a deeply religious experience. Schubert sets the poem as a hymn tune, but it also sounds like a love song.

Wie glänzt der helle Mond, from Wolf’s six Alte Weisen, sets a poem by Gottfried Keller in which an old woman, feeling death approach, imagines the scene that will await her in Paradise. Keller, the atheist, eschews all sentimentality and depicts the old crone with affectionate humour. Wolf seems to misinterpret (or reinterpret?) the text, and writes one of his most beautiful songs, with pianissimo repeated chords high above the stave, suggesting the night sky, and a sweet and harmonious close.

In Auf ein altes Bild Mörike contemplates an old painting of the Virgin and Child resting in an idyllic landscape. The mood, however, is disrupted at ‘Kreuzes Stamm’ by means of a minor ninth, as the poet ponders that in the forest the tree is already growing that will provide the wood for Christ’s cross. The dissonance, though, is of brief duration, and though the little postlude repeats the stab of pain in a telling sforzando, the final two chords resolve the tension in a magical return to the major.

Die ihr schwebet, from the Spanisches Liederbuch, expresses Mary’s anxiety at the storm, as she shelters beneath the palm trees. Whereas in Brahms’s setting of Lope de Vega’s poem (Op 91/2) it was the idea of peace that predominated, expressed by a seamless succession of parallel thirds, Wolf was clearly at pains to illustrate the impending danger that threatened both Mother and Child, plenty of dynamic contrast, surging bass octaves at ‘Ihr Palmen von Bethlehem’, and chilling sforzandi at ‘Grimmige Kälte sauset hernieder’. The winds sough throughout until, in the miraculous postlude, they abate and finally vanish, as Wolf rounds off the song with the opening motif in the opening key—but this time marked not ‘ziemlich bewegt’ but ‘verklingend’ or ‘dying away’.

Schlafendes Jesuskind, based on a painting by the Renaissance artist Francesco Albani, is one of Mörike’s most tender religious poems, and it inspired Wolf to compose a rapt and serene song which he instructs singer and pianist to perform sehr getragen und weihevoll—in a very sustained and solemn manner. The opening phrase, ‘Sohn der Jungfrau’, is repeated by Wolf at the end of the song in hushed adoration, the singer is requested to sing pp, 'wie in tiefes Sinnen verloren' ('as though lost in deep thought'); and pianists must within two bars effect a diminuendo from ppp to pppp.

One of the challenges of being in a recital duo is finding new and interesting ways to present programmes to our audiences. When researching, one is often flooded with songs about love or springtime, loss or longing and it can be difficult to find originality of theme (not that it is always necessary to have a theme of course). So the idea for this album came when Joseph Middleton wanted to create a programme that reflected my interest in mythology and the history of religion (I read Anglo-Saxon, Norse and Celtic Studies at Cambridge). In thinking along these lines we found a wealth of texts set to music which were inspired by people (mostly women as it turned out) who lived within the spheres of myth and divinity, i.e. they were ‘other-worldly’ but yet suffered all the pains of humanity. Or they were of the earth but the experiences they lived through set them apart from others. Jesus himself appears throughout the programme, as does his mother Mary, since themes of Christianity often inspired poetic texts and indeed art forms of all kinds. It is because these heroes and heroines lived through moments of intense pain or drama that their stories have great emotional depth.

Haydn, Schubert and Wolf (who all came from the same lineage of Austrian composers) each took the Lied art form into new harmonic and expressive realms during their lifetimes and, above all, what they shared was a love of poetry and text. All three composers clearly found inspiration when setting these texts to music, creating with them some of Lied’s greatest works. We very much hope you enjoy this album and the stories within.