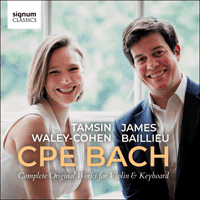 The full power and range of Stradivarius plus modern Steinway grand in the service of CPE Bach's eight violin sonatas: two further variation-based works allow this most expressive of composers to push the boundaries, and complete his output for violin and keyboard.

‘Tamsin Waley-Cohen and James Baillieu embrace this personal idiom with stylistic aplomb and an unfailing ability to project with tenderness the lyricism of slow movements. Their affection for the music is evident throughout … an immensely pleasurable and accomplished release’ (BBC Music Magazine)

Born in Weimar, Carl Philipp Emanuel (1714-1788) was the fifth child and second surviving son of JS Bach and his first wife Maria Barbara. By his own account he had no other teacher for composition and keyboard except his father. Nevertheless, the majority of Emanuel’s earliest works owe more to the influence of Telemann and other exponents of the new galant style, while already suggesting his own progressive instinct. At the age of twenty-four, after seven years studying law, Emanuel decided to devote himself to music. In 1738 he accepted the position of keyboard player at the court of the Prussian crown prince—the future Frederick the Great. After nearly thirty years of royal service he left Berlin and moved to Hamburg, where he occupied the positions of Music Director and Cantor until his death.

In his own time Emanuel enjoyed status and fame on levels which we may struggle to understand today. Any mention of 'the great Bach' usually would have implied CPE rather than JS, although this was partly the consequence of a shift in musical fashion. The concentrated contrapuntal style of the Baroque period had now (around 1750) come to be regarded as passé, the advanced craftsmanship and scholarly approach of JS Bach being criticised in favour of a more 'natural' style. In the 19th century, as more of his father’s masterpieces became fully appreciated—especially after Mendelssohn’s revival of the St Matthew Passion in 1829—so Emanuel’s reputation declined. For well over a century he was considered as no more than a curious figure connecting the late Baroque style and that of the Viennese Classical period. With the renewed interest in neglected 18th-century music, he is now reinstated as a significant composer in his own right. CPE Bach was one of the pioneers of Empfindsamer Stil—a style of heightened expression which exalted, stirred and soothed human passions. As composer and music theorist Johann Mattheson wrote in 1737: 'If the composer desires to move others as well, he must, through simple sounds and their combination, be able to express all of the heart’s inclinations, as if it were an actual discourse …' In common with Haydn and other composers, Emanuel also exploited the Sturm und Drang characteristics which were such a vitalising and disturbing influence on music of that period. Much of Emanuel’s output is relatively conventional, but his unpredictable, even outlandish characteristics are manifest in some of his symphonies and many of his ground-breaking keyboard sonatas. It is in these areas—music which sounds modern even today—that we find the progressive and historically important CPE Bach. One may well imagine that the abundance of temperament in such works was what Beethoven admired above all in his music.

CPE Bach’s sonatas for keyboard and violin (a description still in use as late as the publication of Beethoven’s last violin sonata in 1816) span thirty-two years, from Wq71 (H502) in D major to Wq78 (H514, 1763). These sonatas for two instruments are often categorised as trio sonatas, implying three voices or parts—violin, keyboard right hand and keyboard left hand. Music terminology is often confusing.

Wq71 is an attractive work, the only one of the eight sonatas comprising four movements, its final pair of minuets especially reflecting the fashionable galant style. Here, inevitably, and generally throughout these three early works, some influence of the composer’s father may be felt. The sonatas Wq71-3 date from 1731, when the composer was only seventeen, though he revised them in 1746 when he was employed at the court of Frederick the Great. Here the subversive tendencies manifest in CPE’s mature music are scarcely suggested.

The engaging Wq74 in D major (H507) is unusually entitled 'Sinfonia' but this 1754 work, beginning with a vigorous Allegro and ending with a minuet, is indeed orchestral in style and texture.

The group of sonatas Wq75-78 (H511-514) dates from 1763. These are works on a larger scale in which the composer treats the two instruments with greater equality. In the opening Allegro moderato of Wq76 in B minor the keyboard part is hyper-active with rapid scale passages and arpeggios, only occasionally tempting the violin to venture outside its more lyrical contrasting role.

The C minor Sonata Wq78 has a new depth of expression, with a highly individual slow movement in which the keyboard part (unusually wide-ranging) and violin seem to play quite distinct roles independently of each other. Emanuel’s whole approach here is remarkably original and the finale matches the first movement in its resolute intensity—with one harmonic wrong-turn typical of Emanuel’s subversive instinct. One hundred years later, Brahms actively showed his admiration for these mature CPE Bach sonatas by performing and publishing them.

Two other works complete Emanuel Bach’s total output for keyboard and violin. The Arioso con variazioni in A major, Wq79 (H535) dates from 1781, during the composer’s Hamburg period. He had been director of the city’s five main churches since 1768. His previous employer, the flute-playing, all-round intellectual Frederick the Great, was a man of very conservative taste for whom Emanuel had to produce appropriately unadventurous music. In Hamburg Emanuel’s phenomenal imagination was allowed more expression. Some of his works from this period—such as the ten symphonies, six of them for strings, and many of the keyboard works—show extraordinary boldness, all the greater for having been buttoned up for so long. Emanuel’s position in the court of Frederick the Great may appear privileged, but the king’s conservatism had restricted his experimental creative spirit. The brilliant, much-quoted music historian Charles Burney wrote of Frederick: 'His taste is that of forty years ago.' The fine Arioso con variazioni is a work for keyboard, with brief additions, underlinings or comments from the violin, an imbalance which is even more true of the F sharp minor Fantasia.

The Fantasia genre, which might be described as the ideal vessel for the Empfindsamer Stil, was perfectly suited to CPE Bach’s temperament. Composed in 1787, the Fantasia in F sharp minor, Wq80 (H536) was his final composition for keyboard. In fact it was originally written for solo keyboard, the violin part being added the following year. In characteristic fantasia manner—related to the art of improvisation—there are eleven tempo changes in a succession of diverse moods. Some of these mood-changes are bizarrely abrupt, especially the first new tempo of Allegretto which follows the opening slow section. Later passages of keyboard virtuosity suggest a feverish mind, almost deranged, while dynamic changes are often disturbing or even violent. Eventually the turbulent mood disperses, giving way to a final Allegro in A major of uncomplicated character.

How could we not be curious about a composer about whom Mozart said ‘He is the father, we are the children’? The father of classicism and arguably Romanticism too, CPE Bach’s music enthralled us ever more the deeper we delved. We had to free our minds of any preconceived notions of phrase length or harmonic progression, reacting instead to the immediate emotional impact created by this rebellious free thinker. This sensation becomes increasingly intense as CPE Bach develops his 'sensitive' or Empfindsamer style, with twists and turns of mood, phrase and key that would not sound out of place in Schubert or Schumann. The dynamic range also becomes increasingly extraordinary, with precisely marked juxtapositions of extremes that might be more expected in works by Beethoven.

It was a thrill to become acquainted with this completely new musical language. His music seems to strive to keep us just out of our comfort zone, taken by surprise or disorientated, asking us to look at ourselves anew. Equally his disregard for writing music to please polite society, and in his well-documented concern over his place in music history, he certainly can be considered one of the first truly modern composers. With this in mind, we thought that CPE Bach would have embraced the colour and dynamic possibilities that a Steinway and a Stradivarius can create. He was deeply interested in the mechanics and development of instruments during his lifetime and our approach was to constantly ask ourselves to imagine what CPE Bach would have asked for if he had met these instruments.

Of course, this is music of the Enlightenment, and CPE Bach encapsulated this liberal philosophy with which he was so deeply involved, through his art: the value of the individual; the triumph of reason over superstition or religion; the dignity of humanity; and the concept of free will. These are topics as relevant today as in the mid 1700s, and which must still be fought for.