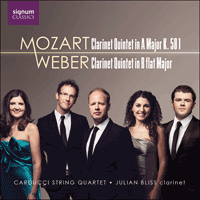 The Mozart and Weber clarinet quintets are not short of recordings, but in the youthful hands of performers as skilled as these can surely be found something of the spirit of maverick adventure that must have fired their original dedicatees.

‘The whole reading [of the Mozart] has a pleasing impulse, balance and bloom, while the serene beauty these players find in the last bars of the Larghetto amounts to a mystery’ (BBC Music Magazine)

‘The Mozart is utterly persuasive, with Bliss's pure tone and control of dynamics allowing him to dovetail beautifully with the string players … it's the Record Review Disc of the Week’ (BBC Record Review)

Throughout every period of musical history the artistry of outstanding singers or instrumentalists has inspired many composers to write works with their individual characteristics—technical prowess, tonal quality, imaginative range—in mind. Within a period of about twenty-five years—between about 1790 and 1815—the clarinet repertoire in particular was enriched by two major composers—Mozart and Weber—who each wrote a succession of works which remain pre-eminent in their respective genres.

Towards the end of his life Mozart wrote a concerto, quintet and trio for his close friend Anton Stadler. (The aria ‘Parto, parto’ in Act One of his opera La Clemenza di Tito includes a basset clarinet obbligato also composed for Stadler.) About twenty years later Weber began a succession of six clarinet works directly resulted from his friendship with Heinrich Baermann, generally regarded as the finest clarinettist of his time. (Around 1890 Brahms—having announced his retirement from composing—would further enhance the repertoire after being inspired by the playing of Richard Mühlfeld. His creative energies revitalised, he composed a quintet, a trio and two sonatas for Mühlfeld.)

The close friendship between Weber and Baermann developed from their second meeting, in Munich in 1811. Preparing a concert of his own works, Weber quickly wrote his Concertino for Baermann to play on this occasion. Baermann had recently been engaged as principal clarinet in the Munich court orchestra of King Maximilian I. The king was so impressed with his performance of Weber’s Concertino that he immediately commissioned the composer to write two clarinet concertos, both of which were completed in 1811. Weber wrote three other works for Baermann—a quintet and two pieces for clarinet and piano: the Grand Duo Concertant and a set of variations. 1811 was also the year in which he began his Clarinet Quintet in B flat major, though the piece was not finally completed until 1815. Just before meeting Weber, Baermann had acquired a new, improved clarinet with ten keys, made by Griessling and Schott. New possibilities included greater facility in chromatic scales. Weber’s quintet is virtually a mini-concerto, the clarinet being more consistently soloistic and dominant than the strings. In all his clarinet works Weber demands considerable virtuosity, but this is never at the expense of the essentially poetic character of the music. Weber’s vocal style, which he developed in his five surviving operas, clearly influenced his clarinet-writing. Even in the rapid passage-work in the outer movements of the quintet, lyricism and elegance prevail, while wit—as in Paganini’s violin music—is another attractive feature. Weber’s affinity with the clarinet is obvious in his superbly idiomatic writing for the instrument. His Der Freischütz is usually described as the first German Romantic opera, but Weber’s status as a pioneering figure of the Romantic period also derives from his colourful and imaginative orchestration. His treatment of both the horn and the clarinet within the orchestra imbued these instruments with a new and potent romanticism.

The Clarinet Quintet begins with a disarmingly simple theme for the strings, the repeat of which is joined by the clarinet’s undemonstrative pianissimo entry. Weber learnt from Mozart and Beethoven that a soloist’s entrance may be equally effective when unobtrusive. A crescendo blossoms into a lyrical melody characterised by jaunty dotted rhythm, whereas the second main theme (in F major) takes the form of a brief dialogue between cello and clarinet. Between the two themes the strings introduce a more assertive idea (fortissimo), answered by more poetic clarinet phrases. There is much attractive and florid passage-work for the clarinet—chromatic scales both descending and ascending, and some extremely wide leaps between the extremes of its range. The development section, which includes a new clarinet melody, is unpredictable and surprisingly strenuous, before the cello provides an elegant lead-back to a recapitulation which proves to be a creative reworking. Here Weber redistributes much of his material, while his continuing development of the assertive idea involves robust imitative writing. With simple understatement, Weber belatedly recalls the clarinet’s first entrance, before an emphatic final cadence.

The Fantasia slow movement, an extended aria for the clarinet above a mostly unobtrusive accompaniment, begins with a fine example of Weber’s skill in creating an evocative atmosphere with economy of means. Twice the serene mood is punctuated by long chromatic scales for the clarinet—fortissimo, then a ghostly pianissimo echo, incidentally demonstrating Baermann’s celebrated dynamic range.

For the mercurial and witty third movement Weber again clearly indicates the character of the music with the term capriccio in the heading, though the trio section is much more sustained and relaxed. The light-hearted rondo finale begins with a rhythmic pattern established by the strings and a perky melody on the clarinet. In the subsequent contrasting episodes Weber introduces two lyrical themes, but most of the movement is dependent on the clarinettist’s agility. In line with contemporary fashion, the most technically demanding writing is reserved for the final section—clearly aimed at stimulating maximum applause, but without descending into empty display.

Completed in September 1789, Mozart’s Quintet in A major, K581, was the second of the three major works which he composed for Anton Stadler, the others being the Trio for clarinet, viola and piano, K498, and the Clarinet Concerto, K622. A contemporary wrote of Stadler’s playing: 'I have never heard the like of what you contrive with your instrument. Never should I have thought that a clarinet could be capable of imitating a human voice so deceptively … indeed, your instrument has so soft and so lovely a tone that nobody who has a heart can resist it.' Stadler had recently developed a slightly extended lower range with four additional notes, creating the so-called basset-clarinet. It soon became obsolete, but this was the instrument for which Mozart originally composed his concerto and probably the quintet. Although an increasing number of performers play these two works on reconstructions of the extended instrument, the orthodox clarinet remains the more commonly used.

The spacious Allegro first movement has a wealth of melodic material, and although all the themes are lyrical in character, there is no lack of contrast. Notably, most of the melodic material of this movement is first introduced by the strings. A suave opening melody for the quartet is answered in bars 7-8 by the clarinet (an upward arpeggio then descending groups of semiquavers), but the most poignant theme is the one introduced by the first violin with pizzicato cello, before being expanded by the clarinet above gentle syncopation. In the development section the clarinet phrase from bars 7-8 is taken up by each of the strings successively in the most animated passage in the movement. In the recapitulation Mozart introduces many modifications in the restatement of his original material. In the very first theme, for instance, the roles are exchanged: the clarinet now plays the melody line, the first violin the answering phrase. At the return of the flowing second theme, the clarinet restates as before, but then develops in a new direction.

The sublime Larghetto, in which the violins play with mutes, is even lovelier than its counterpart in Mozart’s Clarinet Concerto. The clarinet melody is accompanied by gently rocking quavers in violins and viola and a well-defined cello line. From bar 20 a dialogue unfolds between first violin and clarinet—the same kind of eloquent exchange which develops between solo violin and solo viola in the slow movements of the Sinfonia Concertante, K364, and the C major String Quintet, K515. In this exquisite central part of the movement ascending scales are a recurring feature above gentle suspensions. In the return of the material from the opening section Mozart adds more elaborate melodic decoration, until viola and cello respectively take over the triplet patterns for the final bars.

In the amiable Minuet, in which the five players are treated equally, forte and piano phrases alternate. Unusually, there are two trio sections, strikingly contrasted. The first, in A minor, has a violin melody of poignant melancholy, while the clarinet is silent; the second, more rustic trio (in A major) is in the style of a ländler, an Austrian country-dance.

The jaunty theme of the finale gives rise to variations encompassing a wide range of moods. In Variation 1 Mozart exploits the clarinet’s characteristic ease in moving quickly between high and very low notes, here leaping across two octaves. Whereas in a concerto the traditional orchestral passages naturally allow the soloist some necessary breathing space, this same relief must be more carefully managed in a chamber work. Thus in the second and third variations the clarinet contributes very little. Variation 2 has a first violin melody accompanied by triplets on second violin and viola throughout. Variation 3 is an eloquent lament in A minor for the viola, Mozart’s own favourite instrument when playing chamber music. This soul-searching is dispelled by the brilliance of Variation 4, with joyous semiquaver passages played alternately by clarinet and first violin. Following a serene, meditative Adagio, the work ends with a cheerful Allegro.