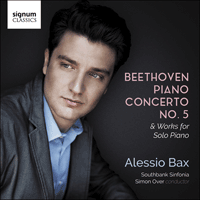 Alessio Bax returns to Signum with frequent partners the Southbank Sinfonia and Simon Over in a new recording of works by Beethoven which includes the majestic 'Emperor' piano concerto.

‘This is an impressive disc, which repays repeated listening and can stand comparison with many of the biggest names’ (Gramophone)

In May 1809, Vienna fell to Napoleon for the second time in four years. The first conquest of the Austrian capital, in 1805, happened relatively quietly, as French forces entered the city without opposition. But the 1809 siege of Vienna was accompanied by a heavy bombardment. History has remembered the image of Beethoven cowering in his brother’s basement, holding a pillow tightly around his ears to preserve what was left of his hearing.

Beethoven wrote to his publisher on November 22: 'We are enjoying little peace after violent destruction, after suffering every hardship that one could possibly endure. I worked for a few weeks in succession, but it seemed to me more for death than for immortality … I no longer expect to see any stability in this age. The only certainty we can rely on is blind chance.' Despite Beethoven’s bleak outlook during this time and a consequently flagging impulse to work, the year 1809 produced several major compositions: the Piano Concerto No 5 in E flat Major, Op 73; the String Quartet in E flat major, Op 74 (Harp); the Piano Sonatas in F sharp, G, and E flat, Opp 78, 79, and 81a; et al.

Unlike the 'Eroica' Symphony (composed in 1803, and in whose genesis Napoleon is directly, infamously, implicated), the Fifth Piano Concerto’s sobriquet—'Emperor'—was not bestowed by Beethoven, but by a publisher post facto. Although Beethoven completed the Concerto before the French invasion, the zeitgeist surrounding the Napoleonic Wars seems nevertheless to have permeated the work. Witness its martial rhythms and suggestions of military triumph in the outer movements.

The 'Emperor', the last of Beethoven’s five piano concerti, recalls the 'Eroica' in several ways. The two works share the same key, the same nobility of character. Indeed, the Emperor is sheerly symphonic in scope—more so than Beethoven’s other piano concerti, which, until the Fourth (1806), generally proceed in the Mozartian tradition. The Fourth and Fifth Concerti, composed after Beethoven’s promise in 1803 'from now on … to embark on a new path', count alongside the 'Eroica' as signature works of his so-called 'heroic' style.

The piano concerto as a genre provides a natural medium for Beethovenian heroism: the solo virtuoso, seated in front of the orchestra—and, nota bene, at Beethoven’s own instrument. (Beethoven himself was soloist in the premieres of the first four concerti, but his worsening deafness precluded his premiering the Fifth. Beethoven’s student and patron, Archduke Rudolph, to whom Beethoven dedicated the Concerto, gave its first performance on January 13, 1811, at the palace of Prince Joseph Lobkowitz. The German pianist Friedrich Schneider gave the Emperor’s public premiere later that year, on November 28.) In this light, the Fourth and Fifth Concertos each present an unorthodox—indeed, revolutionary—take on heroism.

Bucking the convention of orchestral exposition preceding the soloist’s entrance, the Fourth begins with a gentle utterance by the soloist alone. The Fifth goes even farther—to the shock, one can imagine, of contemporary listeners—beginning with a piano cadenza (typically reserved for the movement’s final lap) in dialogue with fortissimo orchestral tuttis.

The Allegro’s primary thematic material further probes the essence of heroism. First violins present the first theme, a gallant melody buoyed by a rush of sixteenth notes in the seconds and violas. Clarinet takes up the melody, dolce, noble and sentimental, punctuated by dotted-rhythm tutti outbursts, as if to depict at once the archetypal hero’s strength and capacity for introspection. Timpani and brass amplify the theme’s might—a thundering departure from the Fourth Concerto, in which trumpets and timpani don’t appear until the final movement.

The second theme is contemplative: staccato violins, followed by splendid, legato horns. So is it brief, before the first theme returns excitedly to the fore. Anticipating the Romantic trope of Robert Schumann’s complementary alter egos, the virile Florestan and the pensive Eusebius, the Allegro’s exposition is squarely Florestan’s purview.

The piano enters with grand, majestic chords, yet dolce; the hero’s strength is coincident with his benevolence. Such is doubly asserted when the piano takes up the contemplative second theme, pianissimo, leggiermente, and elaborated into thoughtful triplets—the Solomonic reasoning of an enlightened ruler.

'The quality of mercy is not strain’d', Shakespeare tells us. 'It droppeth as the gentle rain from heaven / Upon the place beneath … 'Tis mightiest in the mightiest: it becomes / the throned monarch better than his crown.' Certainly, Beethoven’s throned monarch brandishes his sceptre too. A rich development section pits the soloist toe-to-toe with the orchestra en masse. Throughout this colossal movement, the soloist is unquestionably the catalyst, leading the orchestra here with virtuosic, finger-twisting counterpoint, there with magnificently sonorous proclamations.

Notwithstanding the first movement’s grandeur, and despite being the shortest of the Concerto’s three movements, the sublime Adagio, in B Major, constitutes the 'Emperor'’s emotional heart. Its searching melody, marked by an aching ascent of a seventh, is surely one of Beethoven’s most deeply felt.

In 1821, Sir John Russell wrote of Beethoven: 'The moment he is seated at the piano, he is evidently unconscious that there is anything in existence but himself and his instrument.' In this poignant, private music, we hear the composer thus seated at his piano—until the end of his life, writes biographer Maynard Solomon, 'Beethoven’s most intimate means of self-communion'.

The Adagio ends with a pregnant closing gesture: an ascending E flat major chorale, emerging from a hazy fog of horns. This gesture explodes, attacca, into the ebullient 6/8 rondo fi nale. The victorious refrain infuses the galloping lilt of 6/8 time (ONE-two-three, TWO-two-three) with an adrenalized rhythmic jolt (ONE-two-THREE, two-two-THREE, ONE-). This finale is a sonata-rondo, a hybrid form in which the refrain not only recurs in between contrasting episodes, but develops as the movement proceeds. Beethoven’s hero is ever searching, ever pursuing a new path. His journey is never complete.

The present recording complements the 'Emperor' Concerto with a selection of lesser-known works for solo piano. There are two early works: a short prelude and a set of contredanses; and two later ones, the Polonaise in C major and the Sonata No 27 in E minor, Opp 89 and 90, both composed in 1814.

The Prelude in F Minor, WoO55, is thought to have been composed in 1803 (it was published in Vienna in 1805), though some sources contend it may date from as early as 1787. It is tempting to hear it as the dark, moody creation of the angsty seventeen-year-old Beethoven. More precisely, the Prelude betrays the young Beethoven’s deep study of Bach’s keyboard preludes. (In 1783, Beethoven’s teacher, Christian Gottlieb Neefe, published the following on his student’s behalf: 'Louis van Beethoven … a boy of 11 years [sic] and of most promising talent. He plays the piano very skillfully and with power, reads at sight very well, and I need say no more than that the chief piece he plays is Das wohltemperirte Clavier of Sebastian Bach, which Herr Neefe put into his hands … The youthful genius … would surely become a second Wolfgang Amadeus Mozart if he were to continue as he has begun.')

Beethoven composed a set of twelve Contradanses, WoO14, for orchestra between 1791 and 1801; nine appear in versions for solo piano. They seem innocuous, inconsequential works, until the ear detects in the seventh dance a seed for the Eroica Symphony.

The polonaise, a stately Polish dance distinguished by its characteristic rhythm, was popular among European nobility in the early nineteenth century. Beethoven dedicated his Polonaise in C major, Op 89, to the Empress Elisabeth Alexeyevna of Russia, whom he met at the Congress of Vienna. The Empress rewarded Beethoven with a fee of 50 ducats. Beethoven’s Polonaise begins with a flourish before settling into a lively, delectable dance tune. Even a C minor interlude is fleeting, and contains nothing of Beethoven’s signature C minor Sturm und Drang (cf. the Fifth Symphony, Pathétique Sonata, et al.); this Polonaise enjoys fair weather from start to finish.

'I had a delightful walk yesterday with a friend in the Brühl', Beethoven wrote in September 1814 to his patron, the Count Moritz Lichnowsky, 'and in the course of our friendly chat you were particularly mentioned, and lo! and behold! on my return I found your kind letter. I see you are resolved to continue to load me with benefits. As I am unwilling you should suppose that a step I have already taken is prompted by your recent favors, or by any motive of the sort, I must tell you that a sonata of mine is about to appear, dedicated to you. I wished to give you a surprise, as this dedication has been long designed for you, but your letter of yesterday induces me to name the fact. I required no new motive thus publicly to testify my sense of your friendship and kindness.'

The work intended for Lichnowsky was Beethoven’s Piano Sonata No 27 in E minor, Op 90. It remains one of the least well known among Beethoven’s iconic cycle of thirty-two piano sonatas, but of course merits closer attention. It is a compact work, comprising just two movements. The sonata-form first movement, marked Mit Lebhaftigkeit und durchaus mit Empfindung und Ausdruck ('with liveliness and with feeling and expression throughout'), is rhetorically trim. It may put the listener in mind of Beethoven’s 'Serioso' Quartet, a study in brevity whose first movement contains all components of a proper sonata-form movement—a brusque opening theme, lyrical second theme, full development section, recapitulation, and coda—concentrated inside just four minutes of music. Likewise, this Sonata’s first movement is all lean muscle, no fat, nor even repeats. Its terse first theme yields fluidly to a contrasting second theme; the development section occurs in the blink of an eye, and the movement comes to a tidy close. The second movement (Nicht zu geschwind und sehr singbar vorgetragen—'not too fast and very singable') is a flowing, bucolic E major reverie.

Beethoven’s associate and untrustworthy biographer Anton Schindler made the spurious claim that the composer had intended to title the movements Kampf zwischen Kopf und Herz ('A contest between head and heart') and Conversation mit der Geliebten ('Conversation with the beloved')—references, supposedly, to Lichnowsky’s consideration of a marriage prospect. Though utter fiction, Schindler’s claim would not be implausible based on the Sonata’s musical content alone.