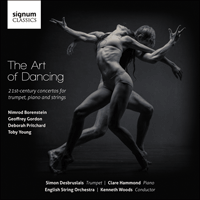 The Art of Dancing

Simon Desbruslais once more expands the repertoire with four new commissions for trumpet, piano and string orchestra including Toby Young's ‘modern homage to the baroque dance suite’: no more Courante or Sarabande, rather Acid House, Drum & Bass and Garage.

It has been almost three years since the launch of my debut concerto disc, Psalm – Contemporary British Trumpet Concertos. During that time I have been fortunate to work with two of its composers again on new commissions—John McCabe, who tragically passed away in 2015, wrote the tremendous Sonata after William Byrd’s ‘Haec dies’ for trumpet and piano (2014), while Deborah Pritchard evocatively showcased the trumpet in Benedicite (2014) with choir and Seven Halts on the Somme (2014) with piano. I also enjoyed meeting and working with many other composers, plotting new projects and bringing their new music to life.

This new disc, the second in my mission to expand the solo trumpet repertoire, is inspired by Dmitri Shostakovich, who originally conceived his first piano concerto as a trumpet concerto. What an important work to us trumpeters it would have been! Eventually he arrived at a final work that is not, strictly speaking, a double concerto, but a piano concerto with trumpet obbligato. It was by reflecting upon this seminal composition in conversations with conductor Kenneth Woods that I began to develop the next phase in my journey: new music for the forces of trumpet, piano and string orchestra, where the soloists are treated as equal partners.

I initially suggested the double concerto idea to Geoffrey Gordon, who was inspired to write a vivid and powerful new work based on two paintings by Wassily Kandinsky entitled Saint Blue. It is particularly noteworthy for its central, extended cadenza section which moulds the forces of muted trumpet and piano with double bass. True to providing equal concerto roles, Geoffrey writes dense, often aggressive piano textures which form a balanced counterpart to his dynamic, bold trumpet writing. This work was partnered in the first recording session by Toby Young’s The Art of Dancing after which this album is named. I first encountered Toby through connections at the University of Oxford—he was completing his doctorate at the time—and I was struck by his wide-ranging musical tastes and infectious positivity towards new projects. It was a particular joy, therefore, when he chose to write a double concerto that merged classical concepts with modern dance forms. In our various conversations I also encouraged the use of the piccolo trumpet, which receives novel treatment in the ‘Garage’ and ‘Acid House’ movements. In an almost exact reverse of Shostakovich, Toby had originally conceived of writing a piano concerto, which after our conversations, became a double concerto!

I first met Nimrod Borenstein by wonderful coincidence following a performance of Deborah Pritchard’s violin concerto Wall of water at the National Gallery in January 2015. Nimrod’s double concerto is particularly noteworthy for its extensive treatment of articulation—in fact, the various rapid quintuplet groupings were a new challenge that I had not faced to the same extent in existing trumpet music. I would visit his house to rehearse these sections, and I was struck by the expert precision and clarity of Nimrod’s musical ideas. I also find a tremendous beauty to the soaring, extended melodies of the central movement, laced with melancholy. Deborah’s solo trumpet concerto, after the same paintings by artists Hughie O’Donoghue that inspired her duo work for trumpet and piano, atmospherically contrasts the trumpet with strings and obbligato harp. It reminds me of when I was fortunate to visit the studios of Hughie, and to improvise in front of the paintings alongside Deborah. I performed and recorded both of these concertos in the newly-renovated Middleton Hall at the University of Hull, where I have assumed the role of Director of Performance and have been relishing involvement with UK City of Culture 2017.

I am grateful to Kenneth Woods for his unswerving support and belief in my work, to my manager Matthew Peters, to Clare Hammond who is quite simply one of the most incredible people I have ever met, to the recording team at Signum Classics including Tim Oldham and Mike Hatch who showed exemplary professionalism, inhuman aural skills and unshakeably cheerful temperament during the intensity of the recording sessions, and finally to all four composers involved in this recording for producing instant classics for the trumpet and orchestral repertoire. I would like to dedicate the CD to the memory of three important musical figures in my life, who died in close proximity—Nick Gale, John McCabe and David Trendell.