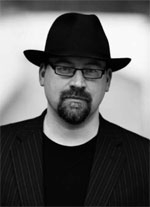 Hailed by Gramophone as a 'symphonic conductor of stature', conductor, cellist, composer and author Kenneth Woods has worked with the National Symphony Orchestra (USA), Royal Philharmonic Orchestra, Cincinnati Symphony Orchestra, BBC National Orchestra of Wales, Budapest Festival Orchestra, Royal Northern Sinfonia and English Chamber Orchestra. He has also appeared on the stages of some of the world’s leading music festivals, including Aspen, Scotia and Lucerne. In 2013, he took up a new position as Artistic Director and Principal Conductor of the English Symphony Orchestra. In 2015 he became the second Artistic Director of the Colorado MahlerFest, the only American organization other than the New York Philharmonic to receive the Gold Medal of the International Gustav Mahler Society.

Woods was appointed Principal Guest Conductor of the Orchestra of the Swan in 2010 and during his tenure lifted that orchestra to a new level of international renown. With them, he recorded the first complete cycle of the symphonies of Hans Gál paired with those of Robert Schumann, among the most widely praised classical recording projects in recent years, highlighted in National Public Radio’s ‘All Things Considered’, Performance Today, BBC Radio 3, the Sunday New York Times, the Sunday Telegraph, Washington Post and was an ‘Editor’s Choice’ in Gramophone. Among his other recordings are Schoenberg’s chamber ensemble versions of Das Lied von der Erde and Lieder eines fahrenden Gesellen (for Somm) by Gustav Mahler, which won the coveted IRR Outstanding rosette from International Record Review, and Spring Sounds, Spring Seas, a MusicWeb ‘Record of the Year’. His recordings with the English Symphony Orchestra and English String Orchestra include the Elgar Piano Quintet as orchestrated by Donald Fraser, and the complete piano concertos of Ernst Krenek, a Sunday Times ‘Best of 2016’.

A widely read writer and frequent broadcaster, Woods’ blog, A View from the Podium, is one of the 25 most popular classical blogs in the world. He has spoken on Mahler on NPR’s ‘All Things Considered’ and BBC Radio 4’s ‘Today Programme’ and is a frequent commentator on BBC Radio 3.