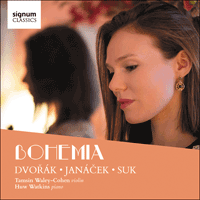 The music of Antonín Dvořák, Josef Suk and Leoš Janáček provides the musical backdrop to an album of bittersweet nostalgia for a time and a place now changed for ever.

‘Fresh, thoughtful and committed interpretations shot through with poetry and alertness’ (Gramophone)

Antonín Dvořák (1841-1904) composed his Violin Sonata in two weeks during March 1880, only months after his Violin Concerto and not long before his Sixth Symphony. Before he was ready to publish the sonata, he played it through with the great violinist Joseph Joachim. Whereas the musically conservative Joachim had been unconvinced by the unorthodox features of Dvořák’s Violin Concerto, persuading him to make extensive changes yet never performing it in public, he thoroughly approved of the sonata. The first subject is a subtle theme ending with a triplet figure which Dvořák fondly repeats, until some forthright transition/development takes over, with many forzando markings. Introduced pianissimo by the piano, the D major second subject has a playful rhythm but maintains the essentially lyrical character. Again the music assumes a stronger profile, with some fortissimo muscle-flexing, whereas the actual development section is less assertive and more exploratory. The wonderfully imaginative coda, calm and evocative, seems to enter a new territory. Among its felicitous rescorings is a new version of the opening theme, now played gently in left-hand octaves with repeated quavers above. The rather Brahmsian Poco sostenuto in 6/4 is nobly expansive and serene, but accumulates considerable tension towards two big climaxes, the first approached by a stringendo/crescendo. The final Allegro molto in sonata form has a dance-like main theme and subsequent themes of relaxed character (in F minor and E flat major respectively), but also a development section based on a new idea derived from elements of two existing themes. This all amounts to an engaging movement of wide expressive range. Dvořák’s Violin Sonata has always been overshadowed by Brahms’ examples of this genre and has never been as popular as Dvořák’s own Sonatina, but it is a work of many beautiful qualities, unfortunately neglected.

Early in 1887, the year in which he also produced the Terzetto for two violins and viola, the Mass in D and the A major Piano Quintet, Dvořák composed a set of Miniatures for two violins and viola, but only a few days later he transcribed the group for violin and piano as Four Romantic Pieces, Op 75. This later version is the form in which this music is known today. (The Miniatures were not heard in their original scoring until 1938.) Three moderately fast pieces are followed by a Larghetto. Curiously, Dvořák withdrew his original titles—Cavatina, Capriccio, Romance and Elegy. In the first piece—Dvořák at his most unselfconscious and captivating—the violin plays a heartfelt melody (molto espressivo) above a buoyantly rhythmic piano part. Marked Allegro maestoso, the second piece is based on a theme comprising three spread chords and a staccato answer. The interval of an augmented second gives pungency to the theme, though in one subsequent C major passage this is 'normalised' into a major second. The third piece begins molto espressivo in joyful, untroubled mood, with an animated piano part, whereas the tonally unsettled, rather dramatic middle section intensifies to a fortissimo passage of violin octaves. Again marked molto espressivo, the final piece is in 9/8, with flowing semiquaver arpeggios in the piano almost throughout, and frequent double-stopping enriching the violin part.

Josef Suk (1874-1935) studied violin, organ and piano with his father, subsequently pursuing music theory with several other teachers, of whom Dvořák was the most inspirational. He became one of his favourite pupils, and married his daughter Otilie. His magnificent Asrael Symphony and Four Pieces, Opus 17 are occasionally performed, but he remains an undervalued composer, not merely an important figure in Czech musical history. Many of his composer-contemporaries—whether progressive or conservative—admired his works, but music historians usually pay more attention to those more 'important' figures who, unlike Suk, broke new ground. He composed the Four Pieces in 1900 for Karel Hoffmann, leader of the Czech Quartet in which Suk played second violin. This ensemble (until 1918 known as the Bohemian Quartet) flourished for over forty years, during which period they premiered major works by Dvořák and Janáček. The opening piece of Suk’s Opus 17, Quasi Ballata (Andante sostenuto), presents an innocent but haunting idea above a chromatically inflected piano accompaniment. In the middle section Suk dramatically transforms the mood with an impassioned quasi-recitative section which incorporates bravura writing for both instruments. The second piece (Vivace) is characterised by simple cross-rhythms, while there is a fantastic element, with the repeated augmented fourths suggesting even a demonic streak. With a slight slackening of tempo the incisive rhythmic character softens to espressivo, but it is the middle section (tranquillo) which brings absolute contrast, an extended melodic line in alternating time-signatures of 3/2 and 4/2. Subtitled 'Un poco triste', the third piece juxtaposes two alternating tempos and moods, and is suggestive of the dumka, a form originating in the Ukraine. In a typical dumka, as in this piece, melancholy gives way to exuberance—here Andante espressivo leading to Moderato (poco scherzando). In the Moderato passages Suk adapts a group of four notes from the second bar of the original melody. Moto perpetuo semiquavers—based on the same four-note group from the previous piece—dominate the final Burleska, but the middle section (scherzando) is steadier, with a new, sprightly theme comprising arpeggio patterns in leaping intervals and incorporating semiquavers from the first section. This set of pieces, richly and diversely characterised, is a remarkably mature composition from a 26-year-old.

Leoš Janáček (1854-1928), the most outstanding Czech composer active in the twentieth century, wrote two much earlier violin sonatas before his recognised, representative work in this form. Dating from 1880, they were either lost or destroyed. The mature Violin Sonata dates from a period (1914-28) in which he composed several chamber works including two string quartets. In the summer of 1917 Janáček, aged sixty-three, met Kamila Stösslová, a married woman of twenty-five. In this final period his obsessive but unrequited love for Ms Stösslová, to whom he wrote more than a thousand letters, generated a tremendous creative impulse. Most of his greatest works—operas, orchestral and chamber works and a song-cycle—date from these extraordinarily productive years. Although he began the Violin Sonata in August 1914, its very protracted and complicated history involves several revisions. Over a period of seven years Janáček reworked the piece, completely discarding entire movements and changing the order at least three times. He completed the work in its final form in 1921. Between 1919 and 1921 he was immersed in his opera Káťa Kabanová (based on Ostrovsky’s play The Storm) and some of its melodic material was absorbed into the sonata. The work begins with an angular violin solo in declamatory style, then a passionate melody with piano accompaniment evoking, with its jangling oscillations of notes, the cimbalom, a pungent-toned folk instrument of Central-Eastern Europe. Although there is no lack of expansive melody throughout the work, often there are disturbing interjections of a little group of notes—a distinctive characteristic of Janáček’s mature style. However, in this piece, begun around the outbreak of World War I, such disturbances, as well as the more anguished passages, may well be connected to the trauma of this specific conflict. As Janáček wrote: '[In this sonata] I could just about hear the sound of steel clashing in my troubled head.' Although the music conveys an episodic, often rather improvisatory impression, close motivic relationships provide a connecting thread. Much of the Ballada has the character of an exquisitely tender lullaby. Although the mood intensifies—there is one strenuous climax—this music is generally less emotionally complex than the preceding movement. A melody of child-like character begins the third movement, with trills a constant feature of the accompaniment. A rapid group of notes—a kind of smear—disturbs this simplicity and very soon Janáček grotesquely distorts the melody. The strongly contrasting middle section brings sustained expression, the initial 2/4 changing to 3/8. Tempo I returns, tentatively at first, as the violin plays the 2/4 melody pizzicato. Elegiac and eloquent, the finale begins with an expressive melody which fully blossoms only from bar 3, after a subversive, urgent little figure played by muted violin (marked feroce) has made the first of its many interruptions. At a slight increase of tempo the violin introduces a tender theme (dolce), before the original piano melody is subjected to anguished and increasingly animated development. A fortissimo restatement of the opening theme (violin with powerful accompaniment) dominates the final section, although the subversive violin figure has the last word, fading to a whisper. The Violin Sonata has the mature Janáček’s stylistic hallmarks—concentrated, intensely emotional melodies, motivic ideas often based on the natural rhythms of his native language, and rapid patterns of notes repeated in the accompaniment.

A couple of years ago I was immersed in the worlds of Stephen Zweig, who has long been one of my favourite writers, and of Philip Roth, when the idea occurred to me to make an album that could encapsulate that moment in time, the ‘world of yesterday’ of central Europe. Culturally, it was perhaps unparalleled in its richness and complexity, and was in its twilight. I have always loved the music of central Europe, its freshness, folk inflections, beauty of melody, but particularly the directness of emotional content, that I feel is present in the works on this album. Within a few deeply poignant notes, Janáček conjures an intensity of emotional experience filled with the often ambiguous and conflicted complexity of the human spirit, and visceral in its power. Dvořák, more loquaciously, transports the listener instantly to a world where the joy of living reigns supreme. His music imparts a life-affirming energy and a sense of wonder at the beauty of the world, even in its occasional sadnesses. Suk’s pieces, which were a new discovery for me thanks to Huw’s suggestion, evoke a world of reminiscences in their bitter sweet beauty and unexpected strangeness, still close enough to taste, yet slipping away.