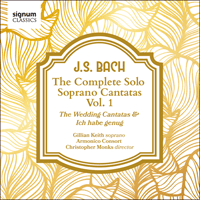 Soprano Gillian Keith joins the acclaimed Armonico Consort for the first in a three-part series featuring the solo cantatas of Johann Sebastian Bach.

'Profoundly incisive and intelligent singing … the jewel in the crown here is the late and woefully under-appreciated wedding cantata, O holder Tag' (Gramophone)

Bach’s cantatas hold a special place amongst performers and devotees of his music. Whether sacred or secular, these works provide incredible variety for listeners and players alike. Some contain elements of storytelling similar to arias and recitatives from his great Passions; many have instrumental movements and solo passages that rival any of his concerti, and are indeed borrowed directly from some of the most famous. Not surprisingly, Bach’s cantatas are often incredibly virtuosic, demanding as much technical ability, style and understanding of the music as any of his other works.

Throughout his career, as church organist, Kapellemeister, and Cantor, Bach wrote hundreds of cantatas of which over 200 survive. These were mostly written to be performed within in the Lutheran service, with the text based on the liturgical passage for the given Sunday in the church calendar. But some were composed for other official occasions, such as weddings, entertainment of nobility, and political functions.

Cantata BWV82 was first performed in its version for bass solo with oboe obbligato on 2nd February 1727 for The Purification of Mary, the feast day which celebrates the presentation of Jesus at the temple. In the prescribed readings for that Sunday was the Canticle of Simeon, Nunc dimittis, on which the libretto for the cantata is based. Perhaps Bach had the voice of Simeon in mind when he assigned the music to the low vocal register; however for its next three performances he arranged the work for soprano and flute, transposed it into a higher key, and thus introduced it into the soprano repertoire. The first recitative and the aria Schlummert ein were copied into the Anna Magdalena Notebook, suggesting she would have played and sung it herself at home, which is an indication of Bach’s special affection for the piece.

In the opening movement, the gentle and plaintive phrase which describes the serene acceptance of death is based on a motif of a rising minor sixth. It is heard in both the flute and soprano line, which Bach also used in the aria Erbarme dich from the St Matthew Passion as well as in the duet from BWV140 Wenn kömmst du, mein Heil? To illustrate the joy of the acceptance of the Saviour and the eager anticipation to meet him, Bach writes extensive florid passages of coloratura on the word “Freude”. The central “slumber aria” illustrates the restful closing of life, with long pedal notes and pauses expressing the cessation of activity and earthly distractions. The closing movement is a jubilant dance full of impatience to reach the final resting place.

BWV202 Weichet nur, betrübte Schatten is by far the most popular of all Bach’s wedding cantatas, and has long been a favourite in the soprano repertoire. But whose wedding was it for? Many suggest that it was performed by Anna Magdalena herself at her own wedding to Bach on 3rd December 1721, when they were “married at home, by command of the Prince”, his then-employer. Although it would have been strange even then for a bride to perform in her own marriage ceremony, the fact that the Prince commanded a home wedding gives some credence to the notion that something unconventional happened. The other suggestion is that the cantata was performed in the celebrations after the service, making it less strange for the bride to participate in the music-making. In any case, scholars date the piece between 1717 and 1723 when Bach was Court Concert Master to Prince Leopold of Anhalt-Köthen.

The text, by an unknown author, compares nature’s awakening in spring to the blossoming of love between two people. Scored for strings and continuo with oboe obbligato, in the opening movement the tender warmth of the oboe line is the musical description of the sun emerging to banish the gloomy winter weather. Several mythical characters are evoked in the poetry: Flora, Phoebus, and even Cupid himself do their work to bring joy and blessings to the lovers. With Bach’s contrapuntal genius evoking Phoebus’ galloping ride in a notably fiendish cello line, and portraying Cupid’s “stepping out” with a sprightly walking bass line.

As the longest of all his solo cantatas, Bach wrote BWV210 O holder Tag for a wedding, but once again we are unsure whose it was. Scholars have narrowed it down to four likely occasions, probably between 1738 and 1746, but the text (by an unknown poet) tells us that it was certainly for the wedding of an influential supporter of music and the arts. Written out in elaborate calligraphy, the parts were likely presented as a gift to the couple, the words speaking of marital love, and the role music plays within it. The recitatives which precede each aria are lengthy, almost like mini sermons, and describe in detail the esteem to which the patron holds music and its effect upon us all.

The cantata is scored for strings with oboe d’amore and flute obbligato. Both flute and oboe have solo movements, and only in the final recitative and aria does the ensemble play all together. The piece begins with a joyful blessing on the nuptial day and a lively aria in bright A major, which colours the “gentle swoon” with a wavy vocal line finishing on a long held E in order to emphasise the lulling effect of the song. The text twice refers specifically to the individual instruments, in the first aria suggesting “the delight of the strings strengthen and uplift” the soul. In the gentle, yet playful middle aria, the command, “Silence, you flutes, silence your tones”, goes unheeded as the flute carries on with extended runs which weave around the voice. The lilting E major aria with oboe suggests rest for the “weary notes”, each time painted with an elongated and tied note, while “tender harmony” is illustrated with a rising arpeggio. Bach’s “Great Patrons” are nobly represented by a courtly dance, and the wedding couple are celebrated in the last movement by a jubilant finale. This bright finale features trills which suggest banners snapping in the breeze and vocal coloratura sparkling like celebratory fireworks!

I have always been drawn to the music of Bach; his cantatas in particular were a mainstay of my early training and career. This ambitious project to record and perform all nine of Bach’s solo soprano cantatas is the realisation of a personal dream that has its roots in my very earliest musical experiences.

I am grateful to Armonico Consort for sharing their excitement and belief in this venture with me. Our 21st century approach to production through an online crowdfunding campaign has brought us into contact with so many supporters and friends we might not otherwise have reached. Thank you to each and every person who helped this project on its way, especially my unfailingly supportive family.