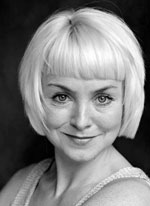 A past winner of both the prestigious Kathleen Ferrier Award and the ROSL Singing Prize, and a distinguished graduate of the Royal Academy of Music, soprano Gillian Keith made her Royal Opera House‚ Covent Garden debut as Zerbinetta in Strauss’ Ariadne auf Naxos and has gone on to repeat the role with great success at Ópera de Oviedo and Welsh National Opera. Her most celebrated roles include Poppea in Monteverdi’s L’Incoronazione di Poppea, The Woodbird in Wagner’s Siegfried, Pretty Polly in Birtwistle’s Punch and Judy, Philine in Thomas’ Mignon, and Ginevra in Handel’s Ariodante, in international opera houses and festivals including English National Opera, Scottish Opera, Netherlands Opera, Geneva Opera and Boston Early Music Festival.

Her concert repertoire is wide and varied, and has taken her to some of the most prestigious stages around the world, including the BBC Proms, Boston Symphony Hall, Sydney Opera House, Bregenz Festival, Edinburgh Festival and London’s Wigmore Hall, in works ranging from Bach Cantatas, to Mozart’s C Minor Mass, to Oliver Knussen’s Symphony No 2. She has forged successful creative partnerships with many orchestras and organisations, including the BBC Philharmonic, The Sixteen, Tafelmusik, Florilegium, Armonico Consort, and the Buxton Festival.

Gillian’s recordings include Handel’s Gloria and Bach Cantatas with John Eliot Gardiner, Handel’s Messiah and Mozart’s C Minor Mass with Harry Christophers, and Handel’s German Arias with Florilegium. She has recorded the role of Zerbinetta in Ariadne auf Naxos with the Scottish Chamber Orchestra under Sir Richard Armstrong, as well as orchestral songs by Dallapiccola, Nielsen’s 3rd Symphony, and Casella’s Le couvent sur l’eau with Gianandrea Noseda and the BBC Philharmonic, all for Chandos. Her recital discs include Schubert Lieder on Marquis, Gillian Keith—bei Strauss for Champs Hill Records, and two volumes of Debussy songs for Deux-Elles.