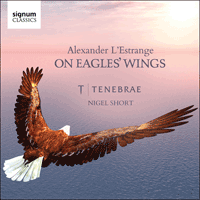 On eagles' wings & other sacred music

Alexander L'Estrange is the added ninth of contemporary church music—his eminently practical music combining the utmost respect for the tradition with a gently subversive wit. Nigel Short and the expert singers of Tenebrae warmly embrace these exciting new works.

'L'Estrange's works add a jazz-infused chordal depth and a roving harmonic eye to Howell's declamatory muscularity and modal palette. It's attractive, approachable music, with nothing contrived or patronising about it' (Gramophone)
'On the showing of this disc, Alexander L'Estrange is the go-to person for evocative and striking small scale new commissions, something lyrically attractive with some luscious harmonies … each item is perfectly lovely with the fine performances of Tenebrae giving us plenty of magical moments' (Planet Hugill)

I was lucky enough to start my musical career as a chorister in the choir of New College, Oxford, where, under the direction of Dr Edward Higginbottom, my love for English choral music was fostered. At the same time I discovered a passion for improvising jazz on the piano and infamously once got into a fair amount of trouble for humming an added 9th in the final chord of A spotless rose by Herbert Howells. Whilst not being particularly proud of this boyhood moment I have used this very same chord in my New College Service, commissioned by Dr Higginbottom some thirty years on, and this time I think I got away with it!

On eagles’ wings is the culmination of over thirty years’ immersion in two of my greatest musical loves—cathedral music and jazz. The jazz element within the context of this church repertoire is more about harmony and voicings than it is about rhythm, although in the title track, the syncopated groove is all-important.

This album could not have been made without the immense generosity of my mother and stepfather, Alison and Michael Smedley, to whom I am extremely grateful for everything. I am also indebted to the various choral directors, educational establishments and cathedral choirs who have commissioned these works over the past fifteen years. Tenebrae’s world-class performances on this album, under the expert guidance of Nigel Short, just blow me away.

New College Service
I owe so much to my five years as a chorister (1981-6) in the choir of New College, Oxford, under the direction of Dr Edward Higginbottom, that I was delighted with this commission, to mark the great man’s retirement from the post. The melodic material is derived from Dr Higginbottom’s dates as organist; 1976 in the key of E major becomes E F# D# C#, followed by E B (Edward’s initials E.H.) followed by F# D# E A for 2014.

Lighten our darkness
I used to love hearing this prayer at Evensong every night when I was a chorister in Oxford. Indeed, it must have been heard and enjoyed by countless generations at Evensong ever since the days of Cranmer’s first Book of Common Prayer in 1549. What a privilege for me to be able to set it to music, and to sing it at our first son’s christening.

Let all the world in every corner sing
I love George Herbert’s poems, particularly those also known as hymns or choral settings (e.g. Howells’ King of Glory, King of Peace) and have always wanted to set Let all the world (originally entitled Antiphon). The premiere in St Paul’s Cathedral featured the brass and horns of the Hampton School big band, plus a percussion section to boot but it works equally well with organ accompaniment.

The Lord’s Prayer
This short, mainly homophonic setting has a little piquancy and spice in its harmonic language, perhaps influenced by another favourite composer of mine when I was a chorister—Kenneth Leighton.

Tune me, O Lord
The inspiration for this piece came in the form of opposing triads being 'tuned into one harmony'. In the beginning the D & A triads in the upper voices over the G triad in the lower voices create dissonances which are finally resolved in A major. This A major section, based on the Latin Musica Dei donum words with a new melody, becomes the central part of an A-B-A form.

On eagles’ wings
My inspiration for this work lay in the many references in the Bible to eagles: strength being renewed like the eagle’s, parents hovering under their young as they learn to fly, and the idea of 'soaring like eagles'. The anthem first introduces fragments of the main theme, sometimes in quasi-recitative style, perhaps evoking an eaglet’s early attempts to fly. When the melody eventually appears in its entirety it is both powerful and uplifting; with a range of an octave and a half, it reaches a climax with the words 'I will soar on eagles’ wings'. The counter-melody beginning 'He has lifted me up' and the overall harmonic structure derive from a jazz/big band composition from my student days; indeed, there were two versions of the world premiere at St Davids Cathedral in 2008—one with choir and organ and another with double bass and jazz piano, played by myself and renowned jazz musician Joe Stilgoe.

Oculi omnium
I am grateful to Leslie East, who for many years ran the ABRSM office choir and would often commission a composer to write a grace for their annual knees-up at the Park Lane Hilton. 'Oculi omnium' was the grace that was said at dinner every day at Merton College Oxford, where I was an undergraduate.

My song is love unknown
I have admired John Ireland’s hymn Love unknown ever since I sang it as a boy, but it was in response to a beautiful interpretation by the jazz saxophonist Ben Castle (son of the late Sir Roy) that I chose this text. Fragments and phrases from Ireland’s melody are developed, re-harmonised and passed around the different voices. Further melodic material then arises from that jazz-influenced re-harmonization, particularly the bass-line at the very start of the piece. Ideally the quartet of soloists, who 'comment' on the text in a Latin translation/commentary by my friend Francis Garcia, should be placed at a distance from the main choir, as if to create a kind of ethereal Greek Chorus.

God be in my head
The simple melodic formula here rises by a scale-degree every line, leading to a darker, richer final statement and a Howells-inspired cadence with a double suspension in the upper voices.

Panis angelicus
The melody and harmony of this upper-voices anthem have a warm, rich quality which owes something of a debt to an earlier song of mine, Pack of three. This formed part of a one-woman musical I wrote with Michelle Magorian, Hello life!, and the song also features on my jazz album New Things to Say, sung by my wife Joanna Forbes L’Estrange.

Lute-book lullaby
This piece will always be close to my heart as it was my first published anthem. The melody is derived from the octatonic scale (alternating semitones and tones), which serves to evoke a bitter-sweet sense of foreboding. The contrast of this with a warmer, diatonic 'Lulla, lullaby' refrain helps to highlight the poignancy of a mother singing a lullaby to a baby whose future would involve suffering.

Epiphany Carol
When it was suggested to me that I enter a piece for the St Paul’s Cathedral Carol Competition my wife, Joanna, composed this lovely poem and its simple strophic structure and topical message inspired me to write the music. The piece is SATB non-divisi, making it ideal for Christmas and Epiphany services and concerts.

Hodie!
Speaking to a number of cathedral and school choir directors, I found that there was a perceived paucity of Christmas repertoire that was jolly, fast and uplifting. This jazzy 5/8 number has already been performed and recorded by a number of choirs, including the BBC Singers, who commissioned a special version with brass and percussion (available on request from Faber Music).

Let the people praise you
These words were suggested to me by Felsted School, and I decided to write a gently unfolding melody that grows to a large central organ climax and then a big octatonic finish which would resound long and loud around St Paul’s Cathedral. The piece received its second performance in front of Queen Elizabeth II when she visited Felsted School later that same year.

An Irish Blessing
The gentle, lilting melody for these much-loved words was composed by my wife, Joanna. My setting of it begins in unison and builds to a fuller choral texture, while an optional flute part can add a folk-like quality. The piece works as well for weddings and leaving celebrations as it does in concert or for church services.