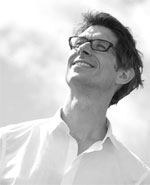 born: 7 April 1974
country: United Kingdom
Alexander L’Estrange is a British choral composer and arranger whose consummate musicianship and stylistic versatility have led to regular commissions from choirs and a cappella groups across the globe. His flagship work, Zimbe! Come sing the songs of Africa!, an ingenious 40-minute fusion of African song and jazz, received 150 performances worldwide within its first five years, something of a record for a new choral work, establishing him as one of Britain’s most popular living choral composers. L’Estrange is a passionate advocate for the importance of singing in schools and the wider community and, to this end, has composed a series of large-scale choral pieces with jazz quintet, all of which are published by Faber Music.

As a chorister at New College, Oxford, under the direction of Dr Edward Higginbottom, L’Estrange recorded and performed many solos and went on to read Music at Merton College, singing countertenor in the choir of Magdalen College under the direction of former member of The King’s Singers, Bill (Grayston) Ives and graduating with a First Class Honours degree. His sacred repertoire, whilst steeped in the English cathedral choral tradition, has subtle allusions to the harmonies and sonorities of jazz, a combination which characterises L’Estrange’s voice as a composer. The publication of his stunning Christmas anthem Lute-book lullaby, commissioned by Tenebrae, resulted in a plethora of commissions from festivals, schools and cathedral choirs.

L’Estrange’s output as a songwriter includes three settings of poems by Shelley, Tennyson and Byron, entitled Love’s Philosophy, currently on the ABRSM Singing Syllabus. He writes arrangements for the world’s leading a cappella groups including The Swingle Singers, Voces8 and The King’s Singers, for whom he wrote and produced the highly acclaimed album Great American Songbook. As Consultant Editor of Faber Music’s popular Choral Basics series, L’Estrange has also written hundreds of arrangements of songs from across the musical spectrum.

Aside from writing, Alexander L’Estrange is a highly accomplished jazz double bass player and pianist, choral workshop leader, adjudicator, presenter of children’s concerts and jazz examiner/trainer for the ABRSM. He presents his music with an infectious mixture of energy, humour and expertise that has become synonymous with his name. He is married to the soprano and jazz vocalist Joanna Forbes L’Estrange with whom he has two very musical sons, Toby and Harry.