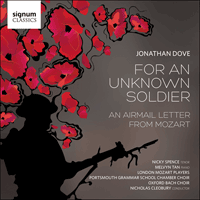 For an unknown soldier & An airmail letter from Mozart

For an unknown soldier is a cantata of remembrance to mark the centenary of the First World War. Commissioned by the London Mozart Players, Jonathan Dove’s poignant work combines the words of war poets with touching choral performances from tenor Nicky Spence, the Oxford Bach Choir and Portsmouth Grammar School Chamber Choir. It is paired with the ensemble’s performance of Dove’s An airmail letter from Mozart, directed from the piano by Melvyn Tan.

'As always with Dove, the vocal writing is finely gauged. Children’s choirs merge seamlessly into and out of the Oxford Bach Choir, with Nicky Spence a highly eloquent focal-point and Nicholas Cleobury securing an animated response from the London Mozart Players … more than just a memento of a major occasion' (Gramophone)
'Dove has a profound feel for literature as well as a protean compositional talent … [his] matchless experience of writing community operas is evident in the way that choirs of young children, older children (Portsmouth Grammar School) and adults (Oxford Bach Choir) are each given a distinct strand of the narrative … Nicky Spence is wonderfully tender in the tenor solos … it’s a marvellously atmospheric work and should be heard' (The Times)» More

'The performance is a good one. Nicky Spence sings expressively and his timbre suits the music very well. The combined forces of the Portsmouth Grammar School Chamber Choir and the Oxford Bach Choir make a very good showing and I particularly appreciated their clarity of diction. The children’s choir sing confidently if not always immaculately. The London Mozart Players bring bite or finesse to the orchestral score depending on the requirements at any one time. Nicholas Cleobury secures a performance of commitment and conviction from all his musicians' (MusicWeb International)» More

An airmail letter from Mozart
If Mozart were alive today, he might enjoy the speed of modern travel, and the accessibility of remote parts of the globe. But however fast and far he went, he would probably still be thinking of Constanze, and writing to her, “You cannot imagine how slowly time goes when you are not with me!” Doubtless he would still cherish her picture (“If I were to tell you all the things I do with your portrait, you would laugh heartily”) and say goodnight to it (“Goodnight, little mouse, sleep well”).

If he were to write to her from this imaginary journey, he would try to cheer her up (“Primo: I beg of you not to be sad”) and perhaps want to share some musical thoughts. There is a delightful account of Mozart driving through the countryside with Constanze, humming all the musical ideas that came into his head, and saying “it is too silly that we [composers] have got to hatch out our work in a room.”

If she were far away, he might jot down a theme and variations as a musical letter. One or two variations might catch some of the musical inflections of places he visited; others would be thoughts of Constanze, intimate, tender and playful. As the basis for this imaginary letter, I have used the Theme and Variations, and one or two other ideas, from Mozart’s Divertimento K287.

For an unknown soldier
Faced with the immensity of the First World War, I thought it wise not to attempt to say too much. I wanted to try to tell the story of just one man, an unknown soldier, as vividly as possible. At first, I had the idea of using actual letters from a soldier, or sailor—letters home, or extracts from a diary, perhaps. Portsmouth Grammar School’s archivist, John Sadden, provided me with a great deal of first-hand material, as well as research projects by pupils exploring as much as they could find out about individual Portsmuthians who were killed in action.

I studied many fascinating first-hand accounts of warfare, and touching letters to loved ones. The cumulative effect of reading them was powerful, but I did not find any that could be sung effectively. I needed a more concentrated form of text, something more distilled, and so I turned to poetry. I realised that many poems written during the war were also, in a sense, letters home.

From my reading, a sequence of poems gradually emerged which suggested to me one man’s journey through the war: beginning with enthusiasm and the decision to enlist; going on to discover the reality of war, and finding death on the battlefield; the grief of those left behind. Four of the poets I have chosen were killed in the war; all were writing during it. I chose poems that had the immediacy of first-hand experience, or suggested the voices—messages, opinions—in someone’s head. Particularly in the First World War, the experiences of men and women were quite different, so I have set some poems for male voices only, or female voices only. I was aware that I was writing for young voices near the age of many of those who fought, as well as for children.

The sequence begins and ends with less familiar poems by the most famous First World War poet, Wilfred Owen, killed a few days before the armistice in 1918. 1914 describes the outbreak of war. Monro’s The poets are waiting conjures a tumult of voices raised in favour of battle. One of Wilfred Owen’s best known poems, Dulce et decorum est, was originally dedicated ‘To Jessie Pope’, and Pope’s taunting verses in The call voice sentiments widely enough shared to be sung by children in the playground. Charles Hamilton Sorley was killed in the Battle of Loos in 1915, at the age of twenty, so there is prescience in All the hills and vales along, an image of men marching to their deaths. Contrasting with this male sound, young women alone sing Women at munition making, and children sing of using munitions in the traditional marching song The British grenadiers.

Lieutenant William Noel Hodgson died a few days after writing Before action, killed on the first day of the Battle of the Somme in 1916. Male voices share his plea ‘Make me a man, O Lord’; the solo tenor finishes his prayer ‘Help me to die, O Lord.’ Between the verses, young women sing a letter To you in France. (Helen Dircks wrote two books of verse, in 1918 and 1920.) Dead man’s dump is the longest text in the sequence, a dramatic and harrowing account written by Isaac Rosenberg in 1917. He was killed the following year.

Ivor Gurney survived gassing, but with his mental and physical health wrecked. To his love is a letter home after the death of a comrade. Its opening, ‘He’s gone,’ is echoed by the voices of children in another traditional song, Tom’s gone to hilo. In Marian Allen’s The wind on the downs, her beloved lives on in her mind. An imperial elegy appears to look down on the battlefield of Europe from somewhere above.