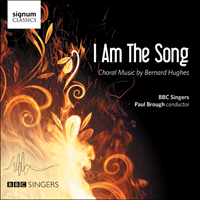 I am the song & other choral works

The BBC Singers and British composer Bernard Hughes have collaborated for over a decade, and this new album presents their finest work together. Hughes seamlessly fuses the modern and the ancient, both in his choice of texts and in his musical style. The album includes two large-scale works: A Medieval Bestiary and the intriguing Death of Balder.

This recording is the culmination of a collaboration with the BBC Singers dating back to 2002, when Three Swans was performed at the Huddersfield Contemporary Music Festival. The two large-scale pieces, The Death of Balder and A Medieval Bestiary, were commissioned and premiered by the BBC Singers. They were both inspired by books, in fine Folio Society editions, bequeathed to me by my godfather, from which I adapted the texts. The other pieces have been written for a variety of choirs and occasions but not previously performed by the BBC Singers.

Two Choral Fanfares, composed in 2010 and 2011, are designed as short concert openers, setting poems by Siegfried Sassoon (1886-1967) and Charles Causley (1917-2003). Everyone sang uses a poem written shortly after the Armistice in 1918. The text does not explicitly reference that event but describes a communal elation translated into spontaneous song. Charles Causley’s work centres on ballads and folksong in the tradition of his native Cornwall. I am the song is an anaphora, each line beginning with the same words. The rhythm of the music is irregular and syncopated, with beats grouped mostly in sevens and fives, and, in contrast to the first fanfare, builds to a loud finish.

Swans have long held a fascination for poets and musicians, often taking on metaphorical meanings. The poems set in Three Swans are wide-ranging in tone and historical background, but are all linked by this most elegant of birds.

Stevie Smith (1902-1971) was a true English eccentric, a poet and novelist whose work was illustrated with characteristic doodles and cartoons. The bereaved swan begins with the striking image of the swan as a floating cake of soap, opening out into an exploration of Smith’s predominant theme: death.

The silver swan is well known as a madrigal by the English composer Orlando Gibbons, published in 1612, but my setting was made before I had heard this original. The words are unattributed, but possibly by Gibbons himself. The text deals with the legend that the swan, silent through life, sings a beautiful song before dying. In the final two lines, set to blazing cluster chords, the swan symbolises the wise, increasingly outnumbered, in Gibbons’s day as in ours.

The oldest of the poems in the set, although presented in a modern adaptation, is a Riddle from the Exeter Book, for which the answer is ‘swan’. The Exeter Book is a tenth-century codex and a major source of Anglo-Saxon poetry, which contains over 90 riddles. Its modern version is the work of poet and critic Geoffrey Grigson (1905-1985). The poem itself does not contain the word ‘swan’, but the choir presents it as if in parentheses throughout the movement, announcing it decisively only at the end.

The winter it is past is a 2014 setting of a short, bleak poem by Robert Burns (1759-1796). Written in 1788 it equates the passing of the seasons with the end of a love affair. The music uses a melodic language borrowed from folksong in a prevailing 5/4 meter.

The stories of Norse mythology make up one of the most extraordinary narrative sequences in all literature. From the creation of the world in the chasm of Ginnungagap to the destruction of the gods at Ragnarök, the tales of Odin and the other gods have a resonance which rings across the centuries. The legend of the death of Balder comes from the Prose Edda of the great Icelandic historian and poet Snorri Sturluson (1179-1241), whose accounts of the ancient tales were intended to preserve pre-Christian forms of Scandinavian story-telling.

The text of The Death of Balder was adapted by the composer from a modern telling of the myths by the poet and novelist Kevin Crossley-Holland. Probably the most famous of the Norse myths, The Death of Balder has been described by Crossley-Holland as ‘one of the world’s great tragic stories’. It is presented as a miniature ‘radio opera’: spoken narration linking solo arias and duets, against an ‘orchestral’—but entirely sung—accompaniment.

Act One tells how the gods are fearful for the safety of the beautiful Balder. His mother gets reassurance from every object throughout the nine worlds that he will not be harmed, but she overlooks a small mistletoe bush. The malign god Loki creates a dart from this bush, which kills Balder. Amid widespread mourning Odin’s son, Hermod, volunteers to journey to the world of the dead to negotiate with its ruler, Hel, for Balder’s return.

In an Interlude, the gods and goddesses keep vigil by Balder’s body through the endless night. In Act Two Balder is given a grand Norse funeral, put out to sea in his boat, Ringhorn. Meanwhile, Hermod gains entry to the world of the dead. Hel agrees to release Balder if everything in the nine worlds shows his worth by weeping for him. Messengers go out, and everything weeps for Balder. But on their return to Asgard, the messengers come across a giantess, Thokk, who stonily refuses to weep for Balder, thereby committing him to remain in the land of the dead. The other gods are convinced Thokk is really Loki in disguise.

The Death of Balder was first broadcast on BBC Radio 3 in 2008, and subsequent performances have included the City of London and Bath festivals. It was runner-up in the British Composer Awards in 2009 and is dedicated to the composer Param Vir.

The text of anyone lived in a pretty how town is by the American poet E E Cummings (1894-1962), and was published in 1940 in the collection 50 Poems. It tells the story of an anonymous man referred to as ‘anyone’, and features Cummings’s customary games with syntax and semantics. The poem is childlike in its simplicity, but disrupted by unusual word order and opaque meaning. This choral arrangement, made in 2011, is based on a setting for soprano, baritone and ensemble, written as a university graduation piece in 1995.

Revelation Window, for double choir, is based on the 1995 stained glass window of the same name in Manchester Cathedral, the work of the glass artist Antony Hollaway (1928-2000). The piece uses a wordless text whose syllables reference the words ‘light’, ‘colour’ and ‘revelation’ in a number of languages. The blocks of harmonic colour reflect the bold outlines of the window. Revelation Window was commissioned by the Seattle-based choir The Esoterics in 2010. The first performance was accompanied by a time-lapse film of light passing behind the window.

A Medieval Bestiary (2011) explores medieval man’s relationship with the world of animals. The text intersperses colourful descriptions of animals—real and imaginary—from a thirteenth-century bestiary now in the Bodleian library, with three Anglo-Saxon animal allegories. Ranging from the comical and the inspired to the downright peculiar, the animal descriptions offer a fascinating glimpse into the medieval mind. The text is based on translations of the bestiary by Richard Barber and of the allegorical poetry by Kevin Crossley-Holland. The Folio Society facsimile Bestiary, its extraordinary illustrations interpolated into the text, gave a starting point for the piece: vivid musical colours to match vivid textual descriptions.

After the introduction, in which the animals of the world are given their names by Adam, sections introducing the beasts of the land, sea and air are each followed with longer passages devoted to the panther, the whale and the phoenix. These symbolically represent respectively Christ, Satan and the resurrection.

The medieval naturalists had didactic intent—to use the natural world to demonstrate how we can be better Christians—and so each of the three large panels ends with a sermon in which the choir instructs the audience on the lesson to be learnt. In the libretto the specific, and leaden, Christian explication of the original sources is removed to leave poetic but opaque moral instructions, for example the final words of the piece: ‘O man, make your chrysalis, and clothe yourself in the new man.’ The musical setting is extremely varied, from the plainchant-inspired opening, to the chorale-like sermons and the exhilarating chaos of the naming of the animals.