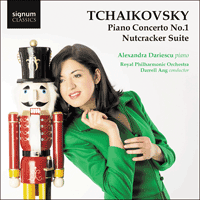 Alexandra Dariescu has garnered an impressive reputation for her outstanding solo recordings and concert performances. This opulent debut concerto recording on Signum pairs the glorious Tchaikovsky Piano Concerto No 1 with a suite of solo piano arrangements from The Nutcracker.

'Here is a pianist with something special to say' (Pianist)» More

Many works now firmly established in their respective repertoires, whether symphonies, concertos or operas, initially met with either rejection by musicians or a public reception ranging from indifference to downright hostility. Tchaikovsky’s Piano Concerto No 1 is among the most celebrated cases of a piece which inspired total rejection by its intended soloist. When the composer gave a private performance of his concerto for Nikolai Rubinstein, director of the Moscow Conservatory from 1866 to 1881, he was deeply shocked by his reaction. Three years later—still wounded—he recalled that scene: “Then sprang forth a vigorous stream of words…by degrees his passion rose, and finally he resembled Zeus hurling thunderbolts…My concerto, it turned out, was worthless and unplayable…so clumsy, so badly written as to be beyond rescue…the music itself was bad, vulgar…”. Rejection in itself was damaging enough, but the gratuitously cruel manner in which it was expressed compounded the insult. Tchaikovsky refused to change a single note. When he later realised his misjudgement, Rubinstein became one of the concerto’s most enthusiastic advocates. What most disturbed this conservative academic Rubinstein was probably the audacious originality of the concerto. There are two striking aspects to the very first theme. This broad melody for strings is supported by massive chords on the piano, a thrilling solo entry which is a paradoxical combination of accompaniment and the grand manner. (Originally Tchaikovsky indicated these chords to be played arpeggiated!) Equally unusually, this melody is never recalled. The initial double statement of the opening theme leads to a cadenza, some brief development and a restatement of the big melody with even more extravagant piano accompaniment. The types of relationship between soloist and orchestra in Romantic piano concertos vary considerably—ranging from a dialogue of equals to a gladiatorial contest. Tchaikovsky sees his soloist playing the role of a gladiator, with a piano part that—from the very outset—is heroically assertive in character. This quality recurs throughout much of the concerto, often in fiercely demanding piano-writing. The opening paragraph ends calmly and reflectively, before the soloist embarks upon a new, jaggedly rhythmic theme in a faster tempo (Allegro con spirito)—a theme derived from a Ukrainian folksong traditionally sung by blind beggars. The melodies of the second subject group are lyrical and, like the opening theme of the concerto, have that intensely memorable quality characteristic of Tchaikovsky greatest music. In the development section Tchaikovsky generates great dramatic tension, while also transforming out of all recognition a tender melody originally introduced by muted first violins. A passage of alternating orchestral and piano chords leads to a large-scale cadenza, before the resplendent coda concludes this massive movement (far longer than the other two movements added together) in resplendent manner.

The second movement is simple in form—a placid opening section with a charming flute melody, a brilliant central section in much faster tempo, then a return to the first section. In the dizzying, scherzo-like middle section, marked Prestissimo, the violas and cellos play a melody based on a French cabaret song that was popular in Russia—“Il faut s’amuser, danser et rire” (One must amuse oneself with dancing and laughing). The solo piano prepares the return to the opening melody with a passage in which flamboyance dissolves into delicacy. The fiery third movement is in the style of a Russian dance in 3/4, with a strong accent on every second beat. Its opening theme, introduced by the piano almost immediately, is based on a Ukrainian folksong welcoming the arrival of spring. The strongly contrasting second theme, a broad, serene melody first played gently by the violins, is loosely derived from yet another Russian folksong. This melody returns fortissimo near the end of the movement, now re-scored with tremendous grandeur for piano and orchestra. Tchaikovsky’s Piano Concerto No 1 was premiered in Boston on 25th October 1875. Soloist Hans von Bülow was accompanied by a freelance orchestra under B. J. Lang.

During the first half of the 19th century, before Tchaikovsky, the quality of ballet music seldom rose above mediocre. Ballet-masters actually required undistinguished music, so that the dancing should always command undivided attention. They happily employed composers such as Ludwig Minkus and Adolphe Adam, who employed all the facile tricks of the trade in providing stereotyped music of little individuality. This state of affairs meant also that serious composers of any ambition tended to show little interest in writing for the ballet. Before Tchaikovsky the outstanding composer of ballet scores was Delibes, whose Coppélia remains central to the repertoire. Himself a great admirer of Delibes’ music, Tchaikovsky expressed doubts about writing ballet scores: “They tell me that during the production of a new ballet, ballet-masters treat the music very unceremoniously and demand many changes and alterations. To write under such conditions is impossible.” However, this initial reluctance was subsequently overcome by professional expediency. By October 1875, shortly after receiving his first ballet commission, Swan Lake, he was able to write: “I accepted the work, partly because I want the money, but also because I have long had the wish to try my hand at this kind of music.” Already in Swan Lake Tchaikovsky’s inspired and utterly memorable music represented a tremendous advance on traditional ballet scores. His second ballet score, The Sleeping Beauty, followed in 1889. The Nutcracker (1892) is based on Nutcracker and Mouse-king, a story by E. T. A. Hoffmann combining reality with fantasy. It is Christmas Eve and the town president has planned a celebration for his children and their friends. Clara, the daughter of the house, receives among her presents a nutcracker in the shape of a man, but her brother Fritz breaks it. At midnight she sneaks back for another look at the broken nutcracker, only to be confronted by an invasion of mice. The toys all come to life and engage in a battle with the mice, at the height of which the Nutcracker and the Mouse-king fight a duel. Clara intervenes to save the Nutcracker from defeat and, now transformed into a handsome prince, he invites her to the Kingdom of Sweets. Tchaikovsky again displayed his special genius for writing tactile music of great potency and his extraordinary affinity with the magical world of ballet.

The Divertissement from Act 2 provides an extremely varied sequence of entertaining dances with no bearing on the plot. Many of these dances are heard, in a different order, in the orchestral concert-suite Tchaikovsky devised. The March, which accompanies the children’s entrance in Act 1, is deft and piquant, evoking the world of toys rather than the parade ground. For the famous Dance of the Sugar Plum Fairy Tchaikovsky specially (and secretly, in case Rimsky-Korsakov or Glazunov heard of it and used it first) ordered from Paris a celesta, a relatively new instrument. A lively Russian Dance follows, then the brief but vivid Chinese Dance, originally orchestrated with strutting bassoons and shrill flute and piccolo. Forming part of a double-bill with Tchaikovsky’s last opera, Iolanta, The Nutcracker was first staged in December 1892 at the Imperial Mariinsky Theatre, St. Petersburg.

Mikhail Pletnev (born 1957 in Archangelsk) is one of the outstanding pianists of his generation and a conductor in great demand. He received the gold medal in the 1978 International Tchaikovsky Competition and has subsequently made numerous recordings of music including Scarlatti, C. P. E. Bach, Mozart, Haydn, Beethoven, Chopin, Tchaikovsky, Scriabin, Prokofiev and Shchedrin. In 1990 he founded the Russian National Orchestra, serving as its chief conductor until 1999.

As an arranger for piano he has transcribed—in addition to the Nutcracker Suite recorded here—suites from The Sleeping Beauty and from Prokofiev’s ballet Cinderella. His transcription of seven movements from The Nutcracker (published 1978) represents a personal choice rather than adherence to the sequence familiar from Tchaikovsky’s orchestral suite. In Pletnev’s piano version the Overture from the orchestral suite is omitted, the remaining movements being March, Dance of the Sugar Plum Fairy, Tarantella (Variation 1, which follows the Pas de deux), Intermezzo (No 8 from Scene II of the ballet, with its wonderfully spacious and dignified melody), Trepak (Russian Dance, with Pletnev’s brilliant additions), Tea (Chinese Dance) and the rapturous Pas de deux (Andante maestoso) with its overwhelming climax. Only movements 1, 2, 5 and 6 are from the orchestral suite. Pletnev’s magnificent arrangement, while vividly orchestral in effect, enhances the virtuoso pianist’s repertoire in the tradition of all the greatest transcriptions.

About 20 years ago I watched my first concerto on TV—it was Tchaikovsky’s First Piano Concerto played by Emil Gilels from 1959. It hit me: the power, the energy, the sheer scale of this piece! I decided I wanted to play it, but it took time until I felt ready. A few years later, whilst studying at the Guildhall School of Music and Drama with Ronan O’Hora, I felt this was the time to approach the piece. After a few good months of practicing, I started performing it in concerts. One of my most fulfilling performances took place at the Royal Albert Hall with the Royal Philharmonic Orchestra. When the opportunity arose to record my first concerto disc, I knew it had to be this one.

Coupling it with the Nutcracker Suite was inspired by another childhood memory of mine: I used to listen to musical stories on LPs whilst drawing. The Nutcracker was one of my favourites, and 2016 marks 200 years since E. T. A. Hoffman wrote his original tale. Playing Pletnev’s beautiful arrangement of the music which captures the magic of the ballet, normally performed by an entire orchestra, gives me the opportunity to tell this wonderful story and share the excitement of childhood with you, the listener!

Heartfelt thanks to Marco Assetto, Bob and Elisabeth Boas, Sir Vernon and Lady Ellis, Sir George and Lady Iacobescu, Sir Harvey and Lady McGrath, Sara Naudi, Andrew and Samantha Popper for believing in me and making this project happen!