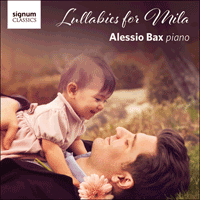 From acclaimed pianist Alessio Bax, this new compilation presents a lovingly curated playlist of soothing classics—to calm a baby or an adult, with music from Bach and Brahms to Rachmaninov and Scriabin.

'If you don't possess any of them, get this release—Bax has picked out the tasteist bon-bons for you' (Pianist)» More

On May 5, 2014, my wife’s life and mine were changed forever. Our daughter Mila was born at the Jewish General Hospital in Montreal. While this is an event many can relate to, no one can ever be prepared for the impact, its sheer magnitude, its complexity and, above all, the beauty that such a little creature can generate in a parent’s life.

My family has always been part of who I am, of course. Then music, since it first showed up at my door in the form of an electric toy piano, assumed another central role. Then my wife, with whom I am lucky to share all aspects of my musical and extra-musical life, soon became another cornerstone. I honestly thought I had no more centres of gravity available, until Mila came along.

Most parents know the various challenges a newborn presents, and how those challenges somehow grow exponentially with time. Our worries were about how to keep music at the centre of our lives, and at the same time dedicate ourselves completely to our daughter, which she surely expected and deserved. Would we resent the time music took away from her, or perhaps be frustrated at not being able to dedicate enough time to our art? I eventually discovered that those were common fears among parents. To our surprise, we discovered that music works in a very special way. Much has been said about music being the ultimate universal language, but it is also all-encompassing. Yes, it is a profession that requires 200% of oneself, at all times, but in the process, it never leaves anything or anyone behind. We first realized this when we saw the calming, but always engaging effect that music had on our newborn. Very specific pieces of music, in fact, like Mozart’s Adagio from the Clarinet Concerto, always seemed to work. And they had to be very specific versions as well. Once, while travelling, I tried a different version, not played on the basset horn, and Mila would just not have it!

So, without planning it, our daughter, our music, and our lives as we had decided to lead them became one entity. The three of us started travelling together from the time she was two months old. Japan was one of our first destinations, and today, at 17 months of age, she has been to 13 countries in North and South America, Europe, and Asia, and 16 states in the USA. Music was a part of her life from before she was born. She was taking naps right after birth next to me learning a thorny score like Ligeti’s Horn Trio. She’s happily sat on stage during rehearsals of Bartók’s Concerto for Two Pianos and Percussion, and—possibly the hardest of feats—she has travelled with her mother, pianist Lucille Chung, when I was away on tour, and Lucille had concerts of her own.

But after countless nights of little sleep, wondering if we could even make it on stage for a long recital program, the same magic happens, over and over again. All tiredness is gone, our focus is sharper than ever before, and thoughts of Mila do not disappear but become part of what we are as we delve deeper than ever into the music of the great masters. Somehow I feel she has already brought us a new dimension in music and life: one of simplicity, beauty and love.

This album is not only a carefully curated playlist of soothing classics to calm a baby and perhaps make him or her fall asleep quicker. It is also intended as a gift from parents to their children, with the hope that they too will eventually share music with their loved ones, not just to entertain them but also to enrich their lives. It is a gift from me to other parents, so that at the end of what might have been a challenging and difficult day, they might put their feet up and enjoy a seamless stream of great music spanning three centuries. And it is a little gift from me to my daughter that I hope will enable me, one day, to say thank you for everything she has done and will continue to do to for us and for this world.